Villains Wiki
Register
Don't have an account?
Sign In
Advertisement
in: Mechanically Modified, Agents of S.H.I.E.L.D. Villains, Spies,
and 42 more

Member of the Centipede Group (formerly; under coercion)
Agent of S.H.I.E.L.D.

Prove to his son Ace that he is a hero and good father (possibly succeeded).

Assist John Garrett in his plans (formerly; under coercion).
Redeem his past actions (overall succeeded).

He was portrayed by J. August Richards.

He appeared in the pilot episode as a superhuman factory worker who saves a woman from an exploding building (being destroyed because of a Centipede Group experiment going wrong) with superhuman strength and jumping. Approached by Skye in a cafe, she warns him that S.H.I.E.L.D. might be after him soon for revealing himself as a superhuman publicly. He has a conversation with Raina, a representative from the Centipede Group, where Raina doesn't seem too happy for risking the exposure of the Centipede Group's existence and plans. The next day, Mike tries convincing his boss to give him a chance to get his job back, but he refuses.

Mike gets furious and straight-up murders the factory owner, prompting Phil Coulson from S.H.I.E.L.D. to go after him. He is shot in the head with an I.C.E.R. gun by Grant Ward, then goes off to a S.H.I.E.L.D. training facility to hopefully make up for killing the factory owner. He joins up with Coulson to go after some guys using the Centipede serum that gave Mike his powers, and is seemingly blown to pieces saving his son Ace from Raina. He wakes up in a room that looks like it's from a Saw movie and has most of his body burned. A robot eye implant shows him computer text of the Clairvoyant telling him to "await further orders".

Later, he is given a robot leg by Ian Quinn, which (painfully) attaches itself to Mike's destroyed leg, making him Deathlok. During the next few months, he is given more equipment by Cybertek and is sent on more missions that involved fighting SHIELD, which included crippling Felix Blake. Following the agency's downfall, HYDRA kidnaps his son and forces him comply with Garrett's orders.

During the final battle at Cybertek HQ, Skye rescues his son, allowing for Deathlok immediately attack Garrett and initially kill him. In the aftermath, he embarks on a journey to redeem his actions.

A year later, Deathlok returns more enhanced than before and assists both Coulson and Lance Hunter against a separate S.H.I.E.L.D. faction, and the three of them reunite with Fitz and join forces with Ward, Agent 33 and a brainwashed Sunil Bakshi in finding HYDRA leaders Wolfgang von Strucker and List. During the battle at Calvin L. Johnson's building, he and Inhuman Lincoln Campbell are captured by HYDRA and experimented on by List. They are both rescued later, although Deathlok's cybernetic enhancements were dismantled and in need of rebuilding.

Deathlok returned in the fifth season's 100th episode and assisted Coulson in closing a portal to a fear dimension, while also fighting off against illusions of past villains, including Lash and Hive. He later attends Fitz and Simmons' wedding before leaving to continue his missions as he prefers to work alone. 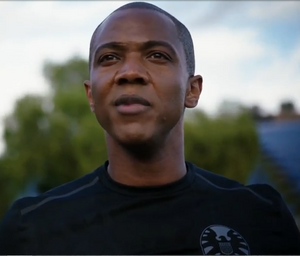 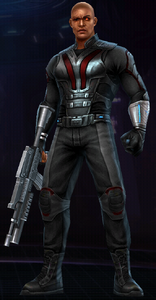