Henchman for Reverb and Zoom

Thrill-Seeking Supervillain
Ronnie Raymond, also known as Deathstorm, is a major antagonist in the Arrowverse, appearing as a supporting antagonist of season 2 of the TV series The Flash.

He was a meta-human criminal from Earth-2 who was in league with the evil speedster Zoom and as his enforcers under the direct leadership of his right-hand man, Reverb. He was the husband and partner in crime to Killer Frost.

Like his mainstream counterpart, he was portrayed by Robbie Amell, who also portrayed Max in The Babysitter.

Ronnie Raymond was one of the many affected by the Earth-2 particle accelerator, which merged him and Martin Stein into a conjoined meta-human named "Deathstorm". However, Ronnie decided to use these powers for evil and became a criminal seemingly against his other half's wishes; Ronnie began shutting out Stein and refused to separate from him to the point that Stein stopped talking to him.

At some point, Deathstorm met and married a meta-human criminal Killer Frost and they became employed by the speedster Zoom under the direct command of his right-hand man, Reverb. Deathstorm and Killer Frost then became Zoom's enforcers in Central City, keeping the other criminals in line and killed anyone who disobeyed his rules.

Deathstorm then meets up with Killer Frost as she was killing some bank robbers and helped her by killing the last surviving robber before he could shoot Killer Frost, and the two shared a passionate kiss. Deathstorm informs Killer Frost that breachers have entered their world, and their job was to hunt them down. She sadistically agrees, and the two set out to kill the breachers.

They hunt down Barry, who has taken the identity of his Earth-2 counterpart, at a café. They demand to know who of the guests is the breacher from Earth-1. Nobody gives himself up and Iris, the wife of Earth-2 Barry, draws her gun to arrest Killer Frost and Deathstorm. Barry then uses his speed to grab Killer Frost and Deathstorm and brings them into a park in Central City. They continue their fight, and Barry cleverly reflects Deathstorms fireblast onto Killer Frost. Deathstorm grabs her and flies off with her, claiming that their battle isn't over.

After the police department has been tipped off about Killer Frost's and Deathstorm's hideout, Iris, her partner Lawton and Cisco head there only to be disarmed by Killer Frost. Reverb then appears, revealing himself as the employer of Killer Frost and Deathstorm as well as Cisco's Earth-2 doppelganger. Reverb offers Cisco to reign Central City by use of their powers, but Cisco turns down Reverb's offer. The Flash arrives and knocks down Reverb. Iris then takes her gun and shoots Killer Frost in the shoulder, causing Deathstorm to viciously attack his opponents. While Barry evades him, he is shot in the back by Reverb. Reverb and Deathstorm then both attack the weakened Barry, who is merely able to dodge their blows. Killer Frost urges both men to stop, as Zoom has ordered them to keep every speedster they encounter unharmed. At that moment, Zoom appears behind Deathstorm and kills him for disobeying him. Killing Reverb as well, Zoom then turns to Killer Frost, claiming that he's glad at least one of his henchmen knows where his loyalties lie. Zoom then leaves with Barry, leaving Deathstorm's and Reverb's corpses behind. Killer Frost drops to the ground in grief. After realizing that Deathstorm is dead, she flees from the scene.

He was avenged when the Earth-1 Killer Frost kills Zoom as the Black Flash when he attempts to kill Savitar. 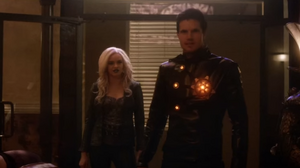 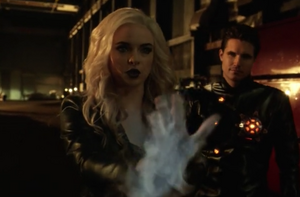 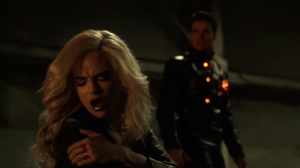