Soldier in the U.S. Army (formerly)

He was voiced by Mark Rolston, and Larry Grimm in Arkham City Lockdown. Rolston also played Bogs Diamond in the The Shawshank Redemption, J. Scar in Eraser, Lex Luthor in Young Justice and Norman Osborn in Marvel's Spider-Man.

Slade was an accomplished member of the Special Forces and this distinction earned him admittance into a covert program where he was subjected to extensive mental and physical augmentation. The procedures left him with increased mental function, as well as enhanced speed, strength, healing factor, and stamina.

Following his military service, Wilson worked for various private military contractors before striking out on his own-and allegedly becoming one of the highest paid contract killers in the world, specializing in high profile assassinations. His unique weapons and abilities include quick regeneration and super strength, a rifle-staff with a built-in grapple, a sword, firearms and his own version of Detective Mode: Tactical Vision.

Eventually, Deathstroke was contracted with a bounty over the head of Batman and if he succeeds in killing him, he will receive $50,000,000 from "Black Mask". After he dispatched several cops, he then lured Batman to a parking garage with an explosive briefcase made by Queen Industries and some of Black Mask's henchmen. He then lay in wait nearby, anticipating the likelihood that Batman would escape the explosion, and proceeded to fight him. Although they fought evenly and fairly, Deathstroke was slowly getting the upper hand, although his sword ended up shot apart by a sniper round from another assassin Deadshot, who also been contracted with several others to assassinate Batman.

Batman managed an escape. Deathstroke then confronted his client with the knowledge that he hired at least one other assassin besides the job, although Black Mask mentioned he "had his chance" and that the night was still young before brutally executing one of his henchmen that was severely wounded from the blast by smashing him with rubble.

On Christmas Eve, Batman learns of the eight assassins that are in Gotham City to claim the bounty on his head. Among the assassins was Slade Wilson, aka Deathstroke, who Batman managed to learn that he was a former military soldier and a subject of a failed experiment. During Batman's search for Penguin aboard his ship, The Final Offer, a grapple claw grips Batman's ankle and drags him towards Deathstroke.

Batman and Deathstroke ensued in a long fight with impressive moves. Deathstroke primarily fought with his Staff and then changed to his Sword after Batman destroyed the Staff. Batman then manages to knock out Deathstroke as he asks the Masked Vigilante of what he is and then Deathstroke was taken into custody by the GCPD.

During the rambunctious riot in Blackgate Prison, Slade is kept imprisoned by Joker whilst doing push-ups. When Batman found him, Deathstroke told him that he no longer had any interest in assassinating him. If someone else offered $50,000,000 dollars other than the clown, then he'd considered it. Eventually, Amanda Wallis and found Deathstroke. She passed him a paper saying "Suicidal Squad", Deathstroke asked what happens if he doesn't sign and she says he rather works for her or rots in Blackgate.

Ten years after Batman defeats Deathstroke on Christmas Eve, supervillain Scarecrow, and militia forces lead by a military leader called the Arkham Knight, take over Gotham on Halloween. After Batman defeats the Arkham Knight, he disappears and his militia forces are now lead by Deathstroke. After Batman takes down the militia's checkpoints, bombs, and watchtowers throughout the city, Batman comes face to face with Deathstroke. Once Batman has destroyed the militia's final cobra tanks and Deathstroke's tank, Deathstroke comes out to kill Batman with his sword but Batman manages to stop him and take him to GCPD. On the way to GCPD, Deathstroke says the next time he goes after Batman, he says he will kill him free of charge.

Due to a "failed" military medical experiment, Slade Wilson had acquired superhuman abilities. Amongst his most notable abilities are him rapidly regenerating from fatal wounds, his increased physical constitution and hyper quick reflexes. His other ability is the fact that his brain capacity has been enhanced by an exponent of nine, meaning he has the brain power of nine human beings combined, providing him with a superhuman intelligence.

He is also a powerful martial artist who has the combat skills to make Batman utilize his complete combat skills, in order to come close to Deathstroke's level of fighting. Batman also prefers to quickly take him down rather than fight him in hand-to-hand combat, thereby implying that Deathstroke's skills are somewhat greater than Batman's skills. He is also an extensively military trained marksman, swordsman, tactical expert & weapons expert. 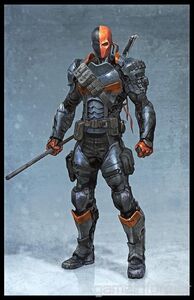 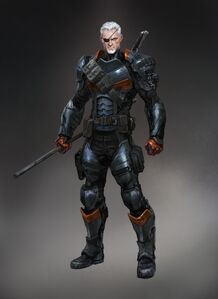 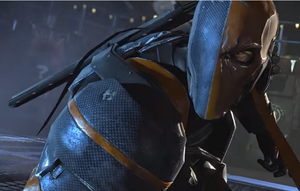 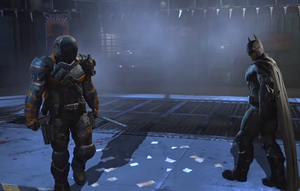 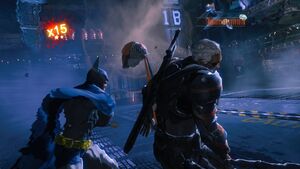 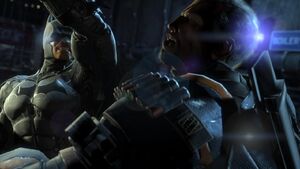 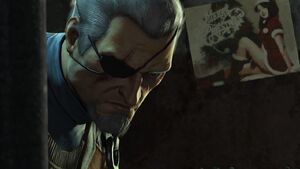 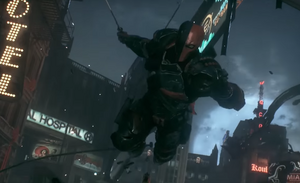 Deathstroke lunges out of his tank 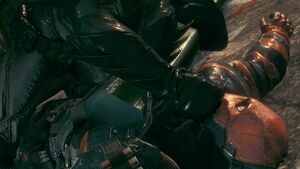 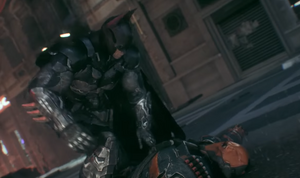 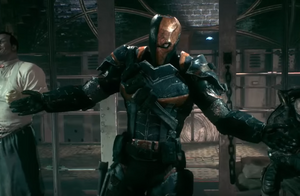 Deathstroke in police custody
Add a photo to this gallery 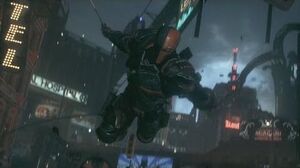 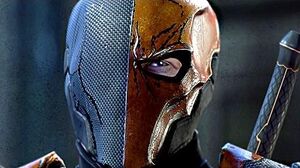 Retrieved from "https://villains.fandom.com/wiki/Deathstroke_(Arkhamverse)?oldid=3847653"
Community content is available under CC-BY-SA unless otherwise noted.