NOTE: This article is about the incarnation of Deathstroke from the DC Extended Universe. The mainstream version can be found here: Deathstroke (DC).

Fulfilling the work he is hired for.

To fulfill every job he is hired to deal with and collect profits.

Slade Wilson, also known as Deathstroke, is a minor antagonist in both the 2017 superhero film Justice League and its 2021 director's cut, Zack Snyder's Justice League. He was intended to be the primary antagonist of the original version of the film The Batman when it was still canon to the DC Extended Universe and directed/written by and starred Ben Affleck, before it was handed over to Matt Reeves and disconnected to form it's own continuity.

In the original script, Deathstroke is a disgraced member of the League of Shadows who seeks revenge on Batman for a prior conflict (implied to be what got him extricated from the Shadows and lost him his left eye), and with assistance from Lex Luthor, would stage a mass breakout of Arkham Asylum and corral Batman's rouges gallery into a gauntlet that would exhaust him and allow Deathstroke an advantage over him in a rematch.

He is an enemy of Batman and a highly skilled and expertly trained mercenary, exceptionally skilled in both swordfighting and marksmanship. His skill in combat leads to Slade being recruited by Lex Luthor after he broke out of Arkham Asylum.

He was portrayed by Joe Manganiello.

After Lex Luthor has escaped from Arkham Asylum, he meets with Deathstroke onboard a super yacht. Arriving at the yacht in a smaller speedboat, Deathstroke is welcomed by Luthor who sarcastically claims that he was just celebrating Superman's return. Luthor claims that Superman and several other heroes seem to be founding some kind of League and Deathstroke interrupts him, threatening that Luthor better not waste his time. Luthor replies that he has too much to live for. As Deathstroke removes his mask, Luthor states that it is time that supervillains like the two of them get a league of their own - seemingly successfully recruiting Deathstroke for his own "Injustice League".

In the "Knightmare" timeline, Darkseid succeeded in collecting the Anti-Life Equation and managed to make Superman become one of his assets. Seeing that humanity was in peril, Deathstroke joined the Insurgency, which was led by Batman, to oppose the Regime and save humanity from Darkseid. 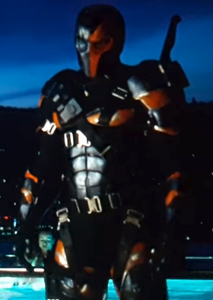 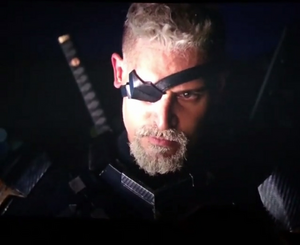 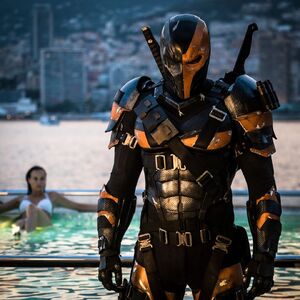 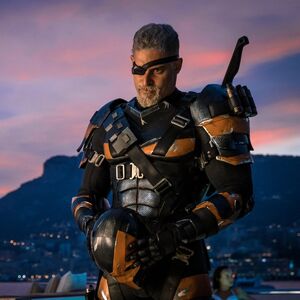 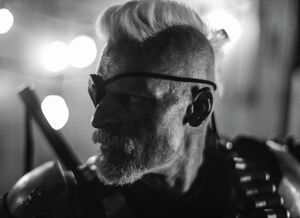 Deathstroke in Zack Snyder's Justice League, as of a member of the Insurgency in the Knightmare future.