Killing his targets.
Completing his assignment.

Torture and kill the Titans by any means necessary (ongoing).
Get his daughter, Rose, back (ongoing).

Slade J. Wilson, also known as Deathstroke, is the main antagonist of the second season of the DC Universe original series, Titans.

Slade was a former Delta Force Commando and H.I.V.E. member that underwent a series of bio-enhancement experiments to become a super-soldier. Sometime later, he became an enemy of the Titans and was responsible for their disbanding, until they returned. Slade is also the father of Rose Wilson and the late Jericho.

He is portrayed by Esai Morales, who also played Amancio Malvado and Paco Moreno.

During his days in the Army, Slade had become a Major and was even a commando in the Delta Force. Afterward, he became a member of other agencies like H.I.V.E., A.R.G.U.S., and N.E.X.I.S. During his time at H.I.V.E, he underwent a series of experimental bio-enhancements that granted him with metahuman abilities. He also married a woman named Adeline and went on to have two children with her, Rose and Jericho. However, Adeline and Jericho went into hiding from him and Rose became estranged from him.

Sometime later, he became a mercenary, known as Deathstroke, and an assassin who was known for killing his targets easily and without remorse. Sometime around 2014, he took on an assignment to kill the Titans and later became enemies with them after he killed Aqualad and they vowed to hunt down for doing so.

Death of his son and Retirement

One year later, Slade’s son, Jericho, began to fall in with the Titans, as a result, Dick killed Jericho as revenge for what happened to Aqualad. This ultimately resulted in some kind of fight that left the Titans believing Slade to be dead and the Titans disbanded. After the fight, he then decided to retire from his work and move to an isolated cabin in the woods.

End of Retirement and Titans Return

After five years of retirement, Slade came to live in a cabin in the middle of a forest. He later went to a store to buy tea, until he saw a news report with Jason Todd on the news saying, “The Titans are back, Bitches.” After seeing the news report, he left the store distraught and silent. He later went to his old mansion in San Francisco where he was received by his assistant, Billy Wintergreen. They then entered a secure room where a mass amount of weapons and an advanced armored suit were being held, with Wintergreen wondering if they were back in business.

Slade later went to San Quentin State Prison to break Arthur Light out and recruit him in his quest to take out the Titans. When he got the prison, he killed many guards there, before releasing Light from his cell. Before taking Light back to his mansion, he carefully planned out their next move, waiting to learn about the newly-formed Titans before they make them all suffer. After Light was caught by Jason Todd siphoning power in a San Francisco train tunnel, Deathstroke provided backup, taking Jason from the scene.

He and Light then took Jason to a warehouse that they used as a temporary hideout. When Jason knocked out Light, he attempted to escape but was stopped by Slade who threatened him with his sword. Later, while Jason was blindfolded and tied to a chair with headphones on, Slade and Light watched the Titans on a hidden camera as they investigated the sewers. After Dick Grayson discovers the hidden camera and that Jason has a tracker in him, Light begins to panic, while Slade says this development is good. Light then accuses Slade of losing focus ever since Rose joined the Titans, even going as far as comparing him to them. After Light leaves deal with the Titans, Slade scans Jason and finds the tracker, and he then begins to cut it out of him. He then shoots Light in his truck while trying to leave and then ties him to a support beam and place's Jason's tracker in his bullet wound.

When the Titans find Light dead, Slade calls them on a burner phone he put on Light, while relentlessly beating on Jason. Slade tells them that if they want Jason back, they must hand over Rose or he will kill Jason and get her back himself. While Slade is sharpening his sword, Jason tells him that he is not afraid and his friends will come for, but Slade rebukes that statement by saying he should be afraid and that his death will hurt the Titans even more, including Dick Grayson. At a hotel, Slade finds that Dick Grayson had decided to give himself up to him so that Rose and his team could be spared. Slade then reveals to Dick that Jason is tied up to a scaffold rigged with explosives.

Before Slade can activate the explosives, Starfire intervenes and blasts him away. Dick and Starfire then proceed to fight Slade but Slade quickly overpowers them with his skills, his powers, and his weapons. As Starfire and Dick are defeated, Deathstroke activates the explosives and sends Jason falling from the hotel as Dick watches in horror, however, an unknown person named Conner catches Jason from falling to his death. After Jason was saved, Deathstroke left.

When Dick interrogated and knocked out Wintergreen, Slade called Wintergreen's cell phone knowing Dick would answer it. Slade then told Dick to go to 123 Lakeland saying that he may remember it. When Dick arrived at the location, he sees photos of his friends revealing that Slade left all those messages for the other Titans to find, while in the Tower. He left a bottle of bourbon for Hank, a bottle of orange soda for Donna, a photo of Ellis for Dawn, a record that Jericho owned for Jason and Rose, and crosses on the wall and the mirror for Rachel.

Slade is strategic, careful, more of an individual when working a job. Slade also doesn't have much of a sense of humor and usually prefers to be very quiet, though he does tend to make snarky remarks to people. Slade doesn't seem to hesitate or feel any remorse after killing or torturing his targets. Slade also has an intense dislike for Dick Grayson for unknown reasons. When it was revealed that Jason Todd had a tracker in him, Slade was unfazed and uncaring when he took out the tracker using a torturous method on Jason, despite it hurting him.

Slade also dislikes people who insult him, his family, and his plans; like when Arthur Light criticized him for his patience with killing Titans, which then got Light killed. It is revealed that Slade may have a soft spot for his family as he appears to check up on them sometimes and when he was willing to defend his daughter by killing Light and by revenge against the Titans for what happened to Jericho. Slade is also quite fearless, even when he has to fight Dick Grayson and Starfire, without even flinching. Slade is also very manipulative with his allies and enemies. 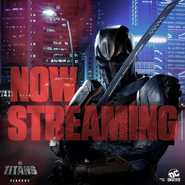 Slade and his suit 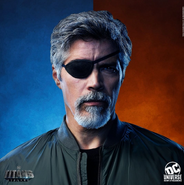 Retrieved from "https://villains.fandom.com/wiki/Deathstroke_(Titansverse)?oldid=3351911"
Community content is available under CC-BY-SA unless otherwise noted.