Leader of the Black Dragonflight

Deathwing the Destroyer, originally Neltharion the Earth-Warder, is the main antagonist of World of Warcraft: Cataclysm. He is one of the five Dragon Aspects and was the leader of the Black Dragonflight.

Thousands of years ago, Neltharion was empowered by the Titans with dominion over the earth and the deep places of Azeroth. Though he was once a kind benevolent dragon, he was driven mad by the Old Gods and he turned against the other Aspects during the War of the Ancients, using an weapon he created called the Dragon Soul which could channel the power of all the Aspects. However, the weapon nearly destroyed Neltharian himself. Among both mortals and dragons his name has become one whispered with a feeling of fear and contempt

The black aspect involved himself in the Second War, adopting the form of Lord Daval Prestor, in order to destroy the Alliance from within. He also managed to turn his greatest enemy, Alexstrasza, into a slave of the Horde, with whom he later allied himself. After suffering a series of defeats, including the destruction of the Dragon Soul, now known as the Demon Soul, Deathwing was chased off by the other Aspects, Deathwing retreated to the elemental plane Deepholm to recuperate. From Deepholm, Deathwing observed his former mate Sintharia's experiments with the twilight dragonflight in Grim Batol. Deathwing now continues his late consort's work. Despite his hatred of mortals, he had a fear of Medivh, admitting he would never face the mortal in battle, however, this could be because of the portion of Sargeras' power within Medivh.

Deathwing made his return as the primary antagonist in World of Warcraft: Cataclysm, the third expansion. Though long believed by most to be dead, Deathwing regained his strength in Deepholm and plotted a return that shook Azeroth to its foundations.

He appeared briefly at the end of the Badlands quest chain, where he attempted to destroy the last known redeemed Black Dragon egg in existence. Little did he know that what he really destroyed was a Red Dragon egg, and that the redeemed Black egg was hidden in an unknown location.

He appeared once more during the Twilight Highlands quest chain, where he led the Black Dragonflight forces at the battle in the skies over Grim Batol. He battled Alexstrasza at the top of the mountain, where they both fell from the sky. Alexstrasza got up, and two other Red Dragons came to help her. Believing Deathwing died from both the fight and the fall, she and the two Red Dragons spoke among each other about how the war will end now with Deathwing's demise. Unfortunately, Deathwing took to the skies, and Alexstrasza was forced to flee. The Destroyer's current whereabouts are unknown, but made occasional appearances across the globe and burning entire regions until Patch 4.3 was released.

Deathwing is the greatest weapon for the Old Gods as his existence will bring the Hour of Twilight, an ancient prophecy created eons ago by the imprisoned Old Gods that will cause the end of all life on Azeroth, including his own, with himself impaled atop Wrymrest Temple.

Deathwing has control over the land and its fathoms, including lava. His main attack, and that of his dragonflight's, is to use his breath as a cannon of lava. He can live within volcanoes and high temperature areas. During his stay in Deepholm, he was further corrupted by the Old Gods and increasing Deathwing's power. Because of the corruption, no force in Azeroth could destroy Deathwing. Because of this, The remaining Aspects realize the only weapon that could destroy Deathwing was the Dragon Soul itself. They send Adventurers to the past to retrieve the Dragon Soul.

Deathwing was the final two bosses in the Dragon Soul raid.

In the first battle, heroes jump down onto Deathwing's back and begin ripping his armor off in order to make a hole big enough for Thrall to make a clear shot with the Dragon Soul. After enough armor was ripped off and Deathwing was shot with the Dragon Soul, he fell down into the Maelstrom, where he rose out of the ocean and began to literally fall apart, allowing his corruption to finally take over. Now more of a molten monstrosity than a dragon, Deathwing's new tentacles and claws battle the heroes as they scatter across the rocks around the Maelstrom, preventing him from starting a second Cataclysm that would finally destroy Azeroth.

In the end, after the adventurers do enough damage to his head, the Dragon Aspects combine all their powers in the Dragon Soul to finally destroy Deathwing, but in doing so draining their powers and making them mortal. Deathwing was literally unmade with only a few fragments of his elementium jaws left behind, and all of Azeroth celebrates his demise. With the death of Deathwing, the Hour of Twilight was prevented, ruining the Old God's ancient plans. The fragments of Deathwing's metallic jaws were placed in the Eastern Earthshrine in Stormwind and the Western Earthshrine in Orgrimmar. With Deathwing dead and the remaining Dragon Aspects mortal, Alexstrasza declared that the age of mortals has begun.

While Deathwing was once a benevolent and peaceful entity, he is now completely evil. He hates all mortal races, and wishes to kill them all. He is also utterly unhinged, most notably shown when he had the Demon Soul. Deathwing was attached to it, such that even when warned by the goblin alchemists who made his first armor that the Demon Soul's energies would kill him if he kept it with him too long, it wasn't enough for him to let go of it, and was only willing to part with, temporarily, when reminded that it would likely be stolen from him if he was dead.

In spite of his insanity, Deathwing does display a degree of cunning. Although he hates mortals, he is apparently willing to tolerate them if it can prove of any help in his plans, though inevitably he will do away with them when they have outlived their usefulness.

Despite Deathwing's overall loathing of mortals, he has respect for (and perhaps even a fear of) Medivh, stating in Day of the Dragon, that he would never willingly face Medivh in combat, though this might have technically been fear of the portion of Sargeras that was locked inside Medivh. He viewed Thrall in a similar way; when the Twilight father expressed disbelief that Thrall could triumph Deathwing made it clear that he planned to take no chances.

He was also very genuine, trustworthy, and loyal to the Old Gods due to his belief that they could free him from his burden.

As a young proto-dragon, Neltharion was a lover of combat He taunted those afraid of Galakrond for being weak, and got himself involved in a fight between Malygos and Coros simply to show off his own strength. It was Malygos's power which led to Neltharion sparking their friendship. 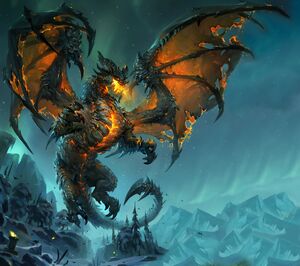 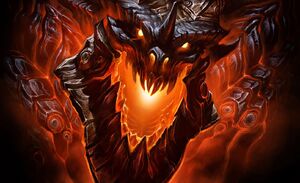 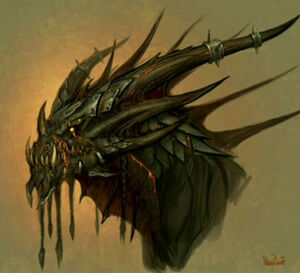 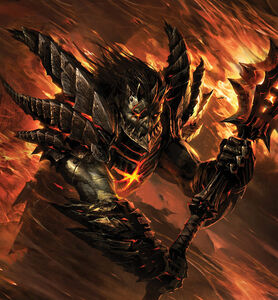 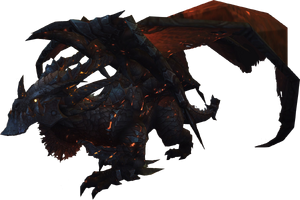 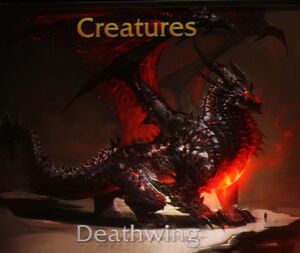 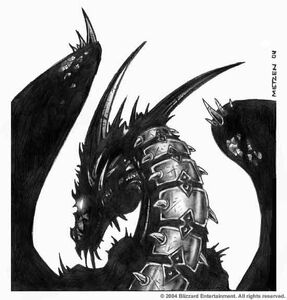 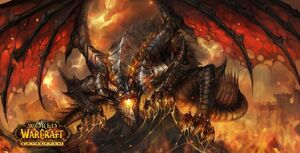 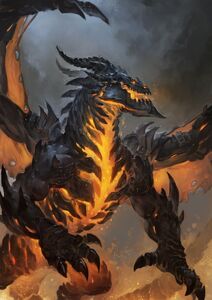 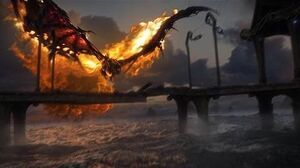 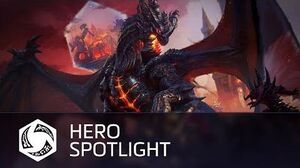