Seducing wealthy bachelors into marrying her.

Marry and kill Fester along with the Addams family for their fortune (failed).

Deborah "Debbie" Jellinsky is the main antagonist of the 1993 sequel Addams Family Values. She is a serial killer and black widow who marries men out of money and not out of love. She married Fester Addams only because she knows the Addams family are rich.

She was portrayed by Joan Cusack, who later played Rachel Bitterman in It's a Very Merry Muppet Christmas Movie and voiced Mrs. Krum in Klaus, while Haley Peel portrayed Debbie as a child.

Debbie Jellinsky had previously married and murdered two other men, one a senator and the other a surgeon, basically because while she was married with each one, none of them dedicated enough time to her, since both were obsessed with their jobs at the point of sacrificing the happiness of Debbie.

She even considered herself as sensitive and delicate as a kid and justified the murder of her parents Sharon and Dave Jellinsky when she was ten by claiming they didn't understand her. The "proof" was that they bought her a Malibu Barbie instead of a Ballerina Barbie. This was the start of her descent into madness and greed as she began killing her husbands with the same motivation - that they didn't love her by satisfying all her materialistic obsessions.

Unlike the psychotic but openly dark Adamses, she tends to hide her insanity even to herself by acting like a loving and tender person. She conned the whole family into hiring her under the impression that Debbie is from a babysitting agency.

Fester immediately falls in love with Debbie when he first lays eyes on her.

Throughout the movie, Debbie tries to kill Fester by blowing up the house with him inside. But even that fails. Towards the film's climax, her true colors are shown in that she doesn't really love Fester and thinks he's nothing but a freak.

She then holds the rest of the Addams family captive and ends up trying to electrocute them, only to end up electrocuted herself and reduced to dust when the Addam's newborn baby Pubert connects the wires together and reverses the current.

She is honorably buried in their infamous cemetery where her tombstone reads "Wife and Psycho".  At the end of the movie, a hand grabbed Wednesday's friend Joel's arm from the ground below her tombstone; the hand is presumed to be Thing's.

She made a return in the Video game versions of the movie - this time by kidnapping Pubert as well as the rest of the family. She met her true end when Fester saved the baby.

A picture of Debbie with a sniper rifle is found in the memorbelia cards collection called Murderers, Killers & Psychos (also called Schizos & Serial Killers by Joel Glicker who is looking for the Jack the Ripper and the Zodiac killer cards to add and collect.). One of these collector cards reveals her true identity as the notorious Black Widow killer and the number of victims she killed. Pugsley wanted to trade the Black Widow card to Glicker for the Amy Fisher card. 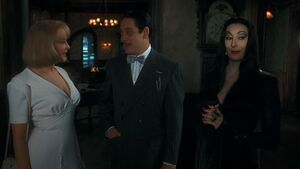 Gomez and Morticia meeting and hiring Debbie as their children's new nanny.

Thing taking an affection to Debbie. 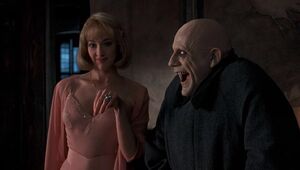 Debbie conning Fester into marrying him for his fortune. 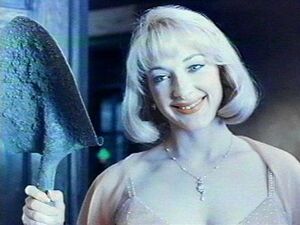 Debbie with the shovel she used to dig up the grave of Fester's mother to take her ring. 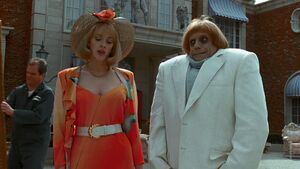 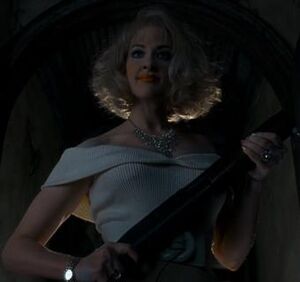 Debbie Jellinsky aka the Black Widow. 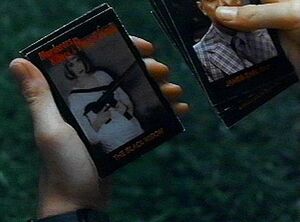 A picture of Debbie Jellinsky in one of the Murderers, Killers & Psychos cards. 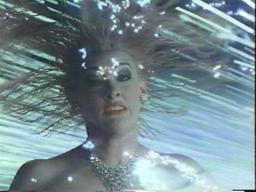