Member of the Deboth Army

to gather happiness for Deboth.

Debo Zaihon is a Debo Monster themed after treasures and armed with the Kokohore Wonder pickax, created to serve Joyful Knight Candelilla. His job was to give humans delusions in thinking that they were digging up treasures, though it soon attracted Aigaron.

He was voiced by Hajime Iijima.

He has the Gold Coin Bombs in his chest to throw at his foes and can perform the Lithograph Stratum Drop attack with his front hard tasset, which consists of sending dozens of lithograph tablets which soon expands to the size of a small car crashing onto his foes, which are incredibly heavy and dense. Zaihon can use a tablet from his tasset as a improptu shield, which is just as sturdy as an enlarged tablet. The tablets are so dense, not even the heavy hitters of the Kyoryugers can break them, and had to bring out the Deinosgrander Zyudenchi to level the playing field.

After an intense scuffle, Debo Zaihon was defeated by a simultaneous hit with the Kentrospiker and Kyoryu Black in Deinosgrander Mode, and then was slain by Raiden Kyoryuzin in record time.

Later, Luckyuro and Aigaron's confusion as to which Debo Monster to recreate resulted in the creation of a hybrid of Debo Zaihon and Debo Doronbosu called Debo Zaihodoron. 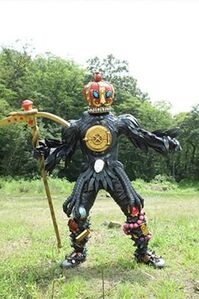