The Taking of Deborah Logan

Serving as a possessed object.

Kill much victims as she can.

Debora Logan is an elderly woman who was possessed by the spirit of the film's main antagonist, Henri Desjardins (who was killed by her prior to the film). She is portrayed by Jill Larson and is inadvertently the titular secondary antagonist of "The Taking Of Deborah Logan."

Mia, Gavin, and Luis are a documentary team set to create a documentary about Deborah, an elderly woman suffering from Alzheimer's disease. Deborah is reluctant to be filmed but agrees to the project after her daughter Sarah reminds her that they need the money to keep the house from being repossessed.

While filming, Sarah and Deborah talk about earlier years when Deborah worked as a switchboard operator for her own answering service business to make ends meet.

Deborah is shown to exhibit increasingly bizarre actions that her personal physician, Dr. Nazir, states are normal for someone with an aggressive form of Alzheimer's. However, cameraman Luis begins to notice that several of Deborah's actions defy normal explanations and expresses concern that something supernatural is occurring. An example of this is when a hidden camera records Deborah standing at the base of the counter, and teleports to the countertop.

Sarah convinces him that it was a glitch in the recording, although she actually had teleported. Things grow tenser after Luis and Gavin record audio of Deborah speaking in French while sitting at her old switchboard, talking about sacrifices and snakes, which worries Sarah because Deborah doesn't speak French. They also notice that the line for 337 continually rings and discover that the line belonged to local physician Henry Desjardins, who disappeared after a series of cannibalistic ritualized murders of four young girls. This information is too much for Gavin, so he quits. Deborah's behavior becomes so extreme that she is hospitalized for her own safety, as seen when she violently rips flesh off of her arms and neck.

Mia and the others discover that Desjardins was supposedly trying to re-create an ancient demonic ritual that would make him immortal but required the deaths of five girls that recently had their first period. They question whether Deborah is possessed by Desjardins as a similar case occurred in Africa where a mother was possessed by her dead son and was freed only when a witch doctor burned the son's corpse.

At the hospital, Harris visits Deborah, who begs Harris to kill her. He tries to comply with her wishes but is unsuccessful when "Deborah" causes a nearby TV to smash over his head, causing him to be hospitalized, and later die of his injuries. Sarah, Mia, and Luis discover that Deborah had unsuccessfully tried to abduct Cara, a young cancer patient in whom she had previously shown interest.

Sarah learns that years ago, Deborah had discovered that Desjardins planned to use her (Sarah) as his fifth victim. She then murdered the doctor before he could accomplish this, and buried his body in the yard. The group eventually finds the body and tries to burn it but fails to do so.

Meanwhile, Deborah succeeds in abducting Cara from the hospital. A security guard attempted to stop her but was killed by "Deborah." Deborah takes her to the location where Desjardins had killed all of his previous victims. Sarah, Luis, and Mia wander through the forest and caves looking for Deborah and find Officer Linda Tweed dead. They then find Deborah just as she's trying to eat Cara's head in a snake-like manner with an elongated jaw.

They finally manage to burn Desjardins' corpse. The film then cuts to news footage of reporters stating that Deborah was deemed mentally unfit to stand trial for the murders she committed and the abduction of Cara. An additional news story shows that Cara has overcome her cancer and is celebrating her birthday. As the reporter begins to wrap up the story, Cara turns to the camera and gives a creepy smile, hinting that Desjardins' ritual was completed and that he is now in control of her body. 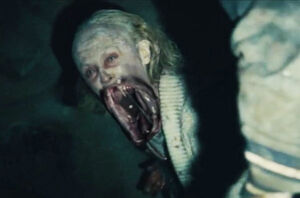 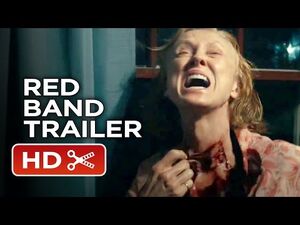 Deborah Ripping Flesh Off Of Her Neck. 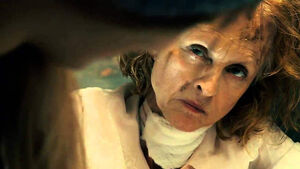 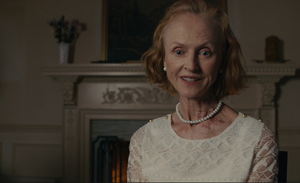 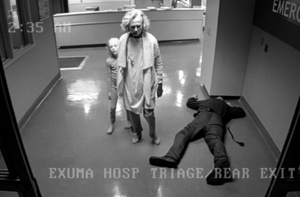 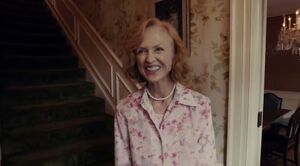 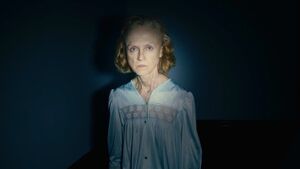 Add a photo to this gallery
Retrieved from "https://villains.fandom.com/wiki/Deborah_Logan?oldid=3956030"
Community content is available under CC-BY-SA unless otherwise noted.