Defeat the Autobots and their human allies.

The Decepticons are an organization of evil Cybertronians and the main antagonistic faction of the Transformers franchise, in some continuities like the G1 cartoon and comic, they are a separate race in their own right. They wage war against the Autobots and seek to conquer the universe. They are usually portrayed as the main antagonists of the Transformers franchise.

There is a military subdivision of the Decepticons called the Decepticlones, who are non-sentient artificially programmed foot soldiers designed to execute Megatron's bidding and destroy all Autobots.

Beginnings as a slave race and liberation

The Decepticons, like the Autobots, were creations of the Quintessons, and were slaves to be sold to other planets in the early days of Cybertron. While the early Autobots were the worker caste known as the consumer goods, the early Decepticons were the warrior caste known as the military hardware. They would fight the wars for the Quintessons and even each other in gladiatorial fights simply out of amusement for the sadistic race. After a while, both the Consumer Goods and Military Hardware developed emotions, becoming sentient and self-aware enough to rebel against the Quintessons and defeat them. Afterwards, the both races inhabited Cybertron in harmony, but this age of peace did not last.

The Military Hardware, now calling themselves the Decepticons, led by Trannis, felt they were the more powerful race since they were the warriors and wanted to take power for themselves, starting to become similar to the Quintessons. The Autobots did not desire this and a civil war broke out with . However the consumer goods, now calling themselves, the autobots eventually won under the leadership of Sentinel Prime leading to a golden age for Cybertron. Hundreds of years later Megatron came to power among the decepticons, he was the most ruthless, merciless, and deadly Decepticon that has ever been created. He restarted the war, ending Cybertron's Golden Age and ledd the Decepticons to several victories, however one day Megatron assaulted and maimed a civilian named Orion Pax. This would prove to be Megatron's biggest mistake as Orion was reformatted into the first battle-ready Autobot, Optimus Prime.

The Great War would get even bloodier. It exhausted Cybertron's energy, turning the once golden planet into a near silver dying world. Both sides decided they needed to find a new source of power. Optimus Prime plotted a trip to Earth. On the way, Megatron had the followed the Autobots on his own ship with his best Decepticon warriors. They boarded the Autobot ship and they fought all the way to Earth. Meanwhile, back on Cybertron, the war raged on with the de-facto Decepticon leader Shockwave to take up Megatron's duties until his return.

Millions of years later in the Earth year 1984, Teletraan 1, the computer onboard the Autobot ship awoke and repaired both factions and reformatted their alternate forms to resemble Earth vehicles. The war would be brought to Earth. For the next 21 years, the final battles of The Great War was fought until in 2005 the Decepticons invaded Autobot City. It was a bloody fight in which many Decepticons and Autobots were lost, including Megatron and Optimus Prime. This would also be the time when their greatest enemy would come, Unicron. He reformatted a damaged Megatron and a few of his troops. Megatron was renamed Galvatron. However, shortly after, Unicron destroyed Cybertron's two moon bases. After a few more battles, They would once again reunited in a common goal against Unicron. However, Unicron forced Galvatron to fight the Autobot, Hot Rod. In the fight, Hot Rod opened the Matrix and was reformatted into Rodimus Prime and defeated Galvatron before he destroyed Unicron. The Decepticons were in no condition to fight the Autobots so they retreated from Cybertron in defeat. The First Great War was over.

The Decepticons were living on a wasteland planet known as Chaar. With very little energy, they were reduced to weakened scavengers. They fought each other for energy and were in no condition to wage war against The Autobots, but an elite team of Decepticons decided that they needed to get back Galvatron to restore them to glory. They went in search of Galvatron and once they found him, he was insane. He would abuse his troops, but despite this, they still needed him. However, the Quintessons returned after they encountered the Autobots shortly after Optimus died, and took the Decepticons from Chaar before Galvatron can return and pit them against the Autobots. The Second Great War began.

After nearly one Earth year in the war, the Autobots, Decepticons, and even the Quintessons were once again facing a common enemy, but this time it was a disease known as The Hate Plague. It would infect anyone, human, Cybertronian, animal, or anything. It was originally a plot that was devised by a human who wanted to get his revenge on the Cybertronians for destroying his lab and the injuries to his daughter. During these events, Optimus was resurrected and he got rid of the plague and resumed his duties of being Autobot leader. Galvatron called for a temporary cease-fire.

However, the war would resume when the Decepticons stole the Key to a Plasma Chamber from The Autobots. This would drag the planet of Nebulous into the war. The Nebulans and the Hive joined forces with the Decepticons. When they discovered that the Autobots are headmasters, the Hive and a few Decepticons became Headmasters, some others became target masters. They fought the Autobots and the Nebulian resistance who themselves were head and target masters. Meanwhile, Galvatron brought Cybertron to Earth. When the Autobots and Decepticons returned to Earth, Galvatron out of pure madness opened the plasma energy chamber. Though little did he know, he was fulfilling a prophecy that the Matrix revealed to Optimus Prime that this would start Cybertron's second golden age.

The Decepticons lost, but Galvatron vowed he would rule the Galaxy. The Second Great War might have come to an end, but the battle to take control of Cybertron would rage on.

The Decepticon logo in Transformers Prime.

The logo of the Decepticons in the Generation One continuity.

Unused concept artwork of the COBRA-Decepticon Alliance in the G.I. Joe/Transformers crossovers 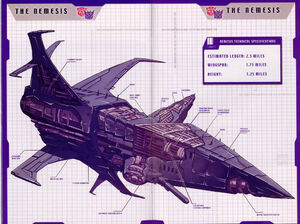 In some continuities, Decepticons are a separate race from the Autobots. 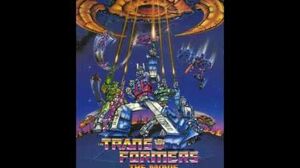 Transformers - The Movie - 2 - Instruments Of Destruction