Having long walks on the beach (assumedly; unknown if its true).

Betray Marcus Pierce and expose him as the real Sinnerman (ultimately succeeded).

The Decoy of Sinnerman is a supporting antagonist in Season 3 of the TV series Lucifer. He is the unnamed former right-hand and decoy of criminal mastermind Marcus Pierce who went rogue for unknown reasons and was initially suspected by Lucifer Morningstar for having him kidnapped, restoring his angel wings and stealing his "devil-face".

He was portrayed by Kevin Carroll.

Little is known about who the unnamed decoy was, or what his real name is. However, it is known that as a boy, he befriended a man known as Cain who groomed him into becoming his right-hand man and his closest friend. During his adulthood, the decoy would act as his figurehead, using his criminal alias "the Sinnerman" to carry out favors for various people and later demanding a form of payment with certain jobs. Eventually, for unknown reasons, he went rogue in Chicago and prompted Cain (now better known as Marcus Pierce) to take him out and keep him from talking. It is also assumed that the decoy learned that Lucifer Morningstar was the actual devil through Pierce, who presumably told him who he really was.

For some time after his betrayal, the decoy began killing several people who did favors with Pierce. He later arrived in Los Angeles and began killing various people who were given favors by Lucifer in an effort to get his attention and assumedly expose Pierce as a criminal mastermind. After Lucifer returned to his penthouse upon discovering two bodies of people he dealt with, the decoy called him by his phone and arranged a meeting at an abandoned storage depot. After luring him into a room and trapping him with reinforced steel to subdue his strength, the decoy appeared on a television screen.

Knowing that Lucifer believed he was the Sinnerman and that he wouldn't believe him that Pierce was the real deal, the decoy played along and presented himself as the crime boss. The two exchanged about him lacking in style and that he only expresses himself through his "work". He then admits that he couldn't trap Lucifer without using bait, in regards to his victims. After Lucifer attempted to get out, the decoy demonstrated his knowledge of him being the devil. When Lucifer asked who he was and how he returned his wings and stole his face, the decoy didn't answer. Lucifer demanded he take off his sunglasses so he could know what he desires, but the decoy knew about his trick and played games with him. An angered Lucifer asks why he's doing this, the decoy simply says that he'll see before cutting off.

The decoy arrived at a restaurant stake out to kill mobsters, including Frankie Ferrante. However, unbeknownst to him, Pierce and L.A.P.D. detective Chloe Decker were there waiting for one of the Sinnerman's men to show up. After killing the mobsters and prepared to finish off the last one remaining, he was interrupted by Decker and Pierce, igniting a gunfight. Bolting to the kitchen, the decoy refused to be taken in quietly, maintaining his act by expressing his enjoyment in the thrill of the chase. After blocking her off, he tries to escape out through the back, but was stopped and tackled by Pierce. Held at gunpoint, the decoy urged Pierce to finish him off, knowing that he had to do it. Pierce was persuaded by Decker otherwise and the two arrest him instead.

Arriving at the crime scene, Lucifer learns from Decker and Pierce that he's been caught. Upon seeing each other, the decoy stared at Lucifer calmly as the latter joyfully planned to interrogate him. Unknown to them, the decoy hid a pen into his sleeves. Arriving at the precinct, Lucifer goes to confront the suspected criminal mastermind to finally learn what he truly desires. Demanding to look at him in the eyes, to his horror, Lucifer learns that the decoy had gouged his own eyes out with the pen, taunting him by saying that now he will never learn what he truly desires and begins to laugh sadistically as Dan and several officers barged into the room. During his incarceration, he plead himself insane.

The decoy then used and cashed in one of Pierce's favors to trick the entire precinct, by forcing her to fake her own abduction so he could allow Lucifer to kidnap him for interrogation. After the woman did so, the decoy was brought back in for questioning, explaining that she'll drown in a spot only he knows. Realizing that the only option was to bust the decoy out, Chloe and Lucifer smuggle him out using a bomb scare to distract Pierce, who ultimately catches on but agrees with their plan. The decoy leads the three of them to the woman's location and they manage to save the woman. But during the struggle, Lucifer kidnaps the decoy just like the latter intended.

The decoy is brought to a secret location by Lucifer where he demands the former to restore his wings. As the crime boss declines to do anything of the such and continues to taunt him, Lucifer has Mazikeen torture him. However, even she cannot seem to break him. Lucifer therefore decides to kill the decoy, realizing that as along as he is alive, everyone Lucifer cares for will be in danger. The decoy tries to persuade him to, wanting him to use his death to put the pieces together and uncover Pierce's true self, but to no avail. His confession of his desire to die leaves Lucifer confused, but Pierce arrives with Chloe and shoots him dead.

However even with his death, by using a photo of the decoy when he was younger and hearing what he had said to him, Lucifer worked out that Pierce was indeed the real Sinnerman as well as the immortal Cain. The decoy was ultimately avenged when Pierce was killed by Lucifer and exposed as the real criminal mastermind, thus he didn't die for nothing. 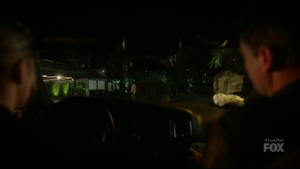 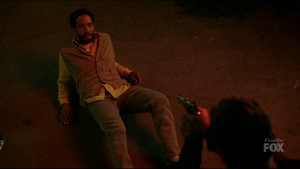 The decoy being cornered by Pierce. 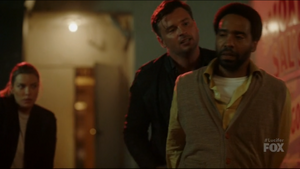 The decoy is arrested. 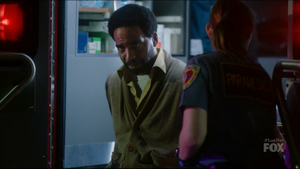 The decoy staring at Lucifer. 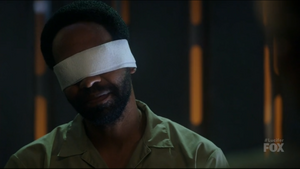 The decoy being interrogated at the precinct. 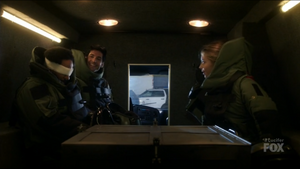 The decoy being broke out by Lucifer and Chloe to find the woman. 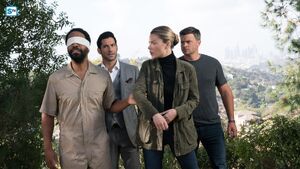 The decoy guiding Lucifer, Chloe and Pierce to the woman's location. 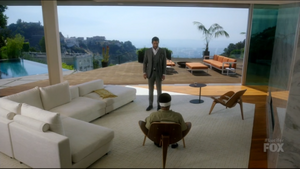 The decoy being kidnapped by Lucifer. 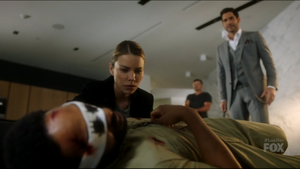