Depends on the story.

Dee Dee is one of the main villains of Oggy and Cockroaches. He is blue-bodied, orange-headed roach with green eyes. In opposite of his brothers Joey and Marky, he is fat and heavy. He is the youngest of the trio and acts somewhat childish.

He is obsessed with eating and can eat everything, including larger animals or other things (such as hyenas, an insect and fish). He is even capable to eat while sleeping, as he once bites Oggy's tail from the sleep. On the other hand, his appetite sometimes causes problems. For example, Dee Dee once eats so much food he isn't able to move and is easily caught by Oggy.

Like Marky, he is in complete admiration of Joey and he will follow him to the end of the world. Only in some rare cases, he complains about Joey's plans. When Joey falls in love with a bee and neglects his brothers, the two beat up his girlfriend at first and then fight Joey himself.

Although he usually only realizes Joey's plans without thinking, when it comes to getting some food, he appears to be very active. When Loch Ness Monster settles in Oggy's house and eats all his food, Dee Dee becomes angry and creates a plan to get rid of it. Eventually, he is the only cockroach who actually attacks the Monster. Joey and Marky don't care about it at all, so Dee Dee's attempt ends unsuccessfully. 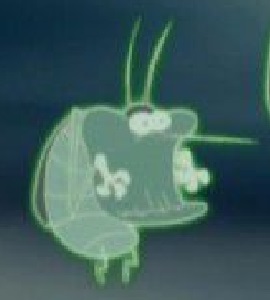 Dee Dee as a ghost 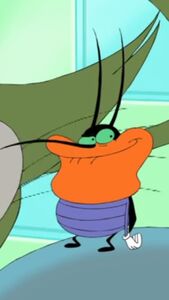 Dee Dee's evil grin
Add a photo to this gallery

Retrieved from "https://villains.fandom.com/wiki/Dee_Dee_(Oggy_and_the_Cockroaches)?oldid=3795643"
Community content is available under CC-BY-SA unless otherwise noted.