Thrill-seekers
Members of the The Jokerz

Having fun in making mischief and mayhem.

Help the Jokerz in taking over Gotham City.
Help bringing the Joker back to power.

The Dee Dee Twins are the twin sisters Delia and Deidre Dennis who were the granddaughters of Harley Quinn and the Joker. They joined the Jokerz gang under the joint alias "Dee Dee" and later followed in their grandmother's footsteps as "hench-wenches" of the original Joker, after he awakens from dormancy in the adult Tim Drake. They are the secondary antagonists of Batman Beyond: Return of the Joker. It is unknown whether Lucy Quinzel is their mother, though she is presumed to be.

They were both voiced by Melissa Joan Hart.

Harley apparently raised the twins herself (it is unknown what happened with their grandfather or their parents), having given up her allegiance to the Joker and doing her best to make them grow up normal kids. She failed. Delia and Deidre inherited Harley's earlier fascination with the Joker, and joined his namesake gang while still in their early teens.

Dee Dee, also called the Deeds, along with Bonk, Chucko, and Ghoul, were recruited by the resurrected Joker for his plan to attack Gotham City. On his orders, the Jokerz stole advanced technology from a series of warehouses.

In the gang's first confrontation with Batman, the young Dark Knight made the mistake of taking them for inconceivable and useless girl "helpers". As soon as he turned his back on them however, they attacked with an amazing blend of skill, ferocity, and coordination.

Appearing as their "normal selves" all dressed in black dress and with their long, blonde hair out, they later attacked Terry McGinnis, the current Batman, in a nightclub, and he barely managed to avoid them. Because of this, they instead went after his girlfriend, Dana, who wound up gravely injured and hospitalized from the attack, but ultimately survived.

In the Jokerz's last confrontation at the Jolly Jack Candy Factory, Batman fought smart: first he goaded them using his invisibility powers, lured them into walking over a floor slippery with jawbreakers, before tricking them into charging into each other, knocking themselves out.

The twins were arrested. They were bailed out into Harley's custody while awaiting their trial, as Harley ranted about what disappointments they were to her. One of them mutters, "Ah shut up, Nana Harley."

In an alternate timeline, Dee Dee and the other Jokerz were recruited by Chronos as enforcers, and upgraded with radically advanced technology and weapons, giving them actual superpowers. The Dee Dee Twins have the ability to double whenever they come in physical contact with anything. In this time-stream, Dee Dee reportedly killed Kai-Ro.

In another battle with the Justice League Unlimited, they succeeded in killing Terry, as well. This was undone when Batman sabotaged Chronos' time belt and trapped him in a loop.

Delia and Deidre Dennis, better known as Dee Dee, are thrill-seeking delinquients who inherited their grandmother's fascination with the Joker, and joined his namesake gang for kicks, and possibly personal gain through street crime.

Although they are two individuals, as twin sisters, they appear to act as though they are one person in two bodies, often speaking as one or completing each other's sentences, along with the fact they are co-referred to as Dee Dee. In fact, they always address each other as Dee Dee, and the way they speak to the other sounds very similar to a person talking to him or herself. They do care for each other and are willing to abandon a job to help the other, as during their first encounter with Batman, one broke away from helping to carry a large piece of technology to save her sister from falling to her death.

Besides their trouble-making ways, they are also definitevely cruel and deceitful, shown when they pretended to be afraid of Batman (Terry McGinnis) and viciously attacked him the moment he turned his back on them, as well as how they had no qualms harming the elderly Bruce Wayne.

In the alternate timeline, they proved themselves to be murderous, having killed members of the Justice League.

Despite their impressive teamwork by acting as one person, they are still susceptible to sibling-rivalry, as Terry tricked them into fighting each other. Moreover, they are followers, not leaders, shown when they cowed in the presence of the Joker, as well as Chronos.

They don't seem to appreciate everything their grandmother has done for them to live a normal life, as one of them tells her to be quiet while she reprimands them.

The twins were Olympic-level gymnasts and experts at tumbling and hand-to-hand combat, and showed impressive teamwork fighting against Terry when they got the drop on him.

In the alternate timeline, the twins were able to multiply themselves at kinetic impact, and carried powerful energy whips capable not only of releasing said energy into targets ensnared in them, but which also had the ability to pierce the shields and constructs of Green Lanterns with ease.

The Dee Dee Twins are very identical in appearance and outfit. Both have gray eyes and long blonde hair, which they hide under yarn-like wigs. Their attires consist of white hats, red strapless tops, white shorts, red go-go boots, and makeup. 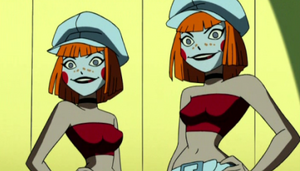 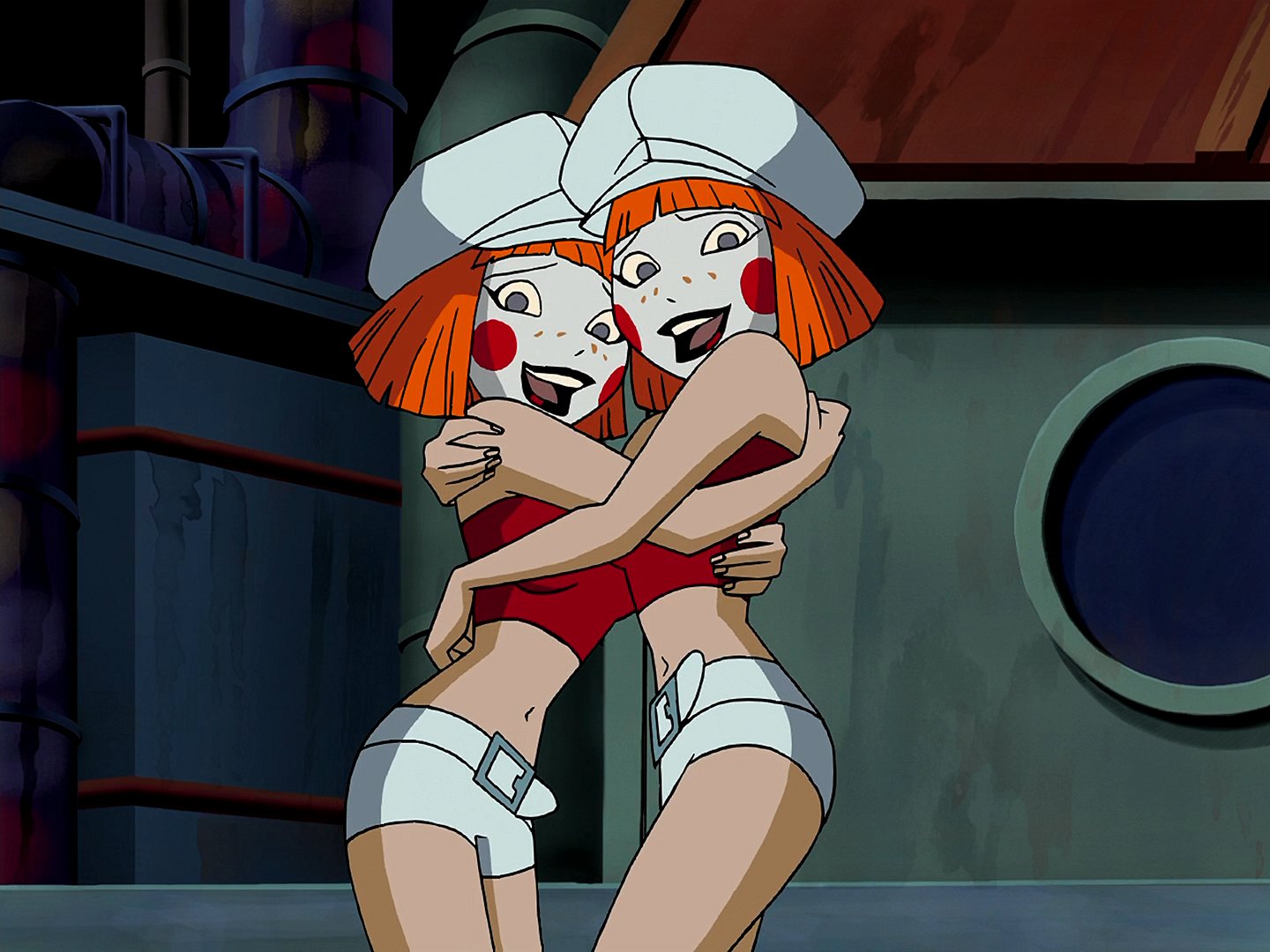 The Dee Dee Twins putting their arms around each other. 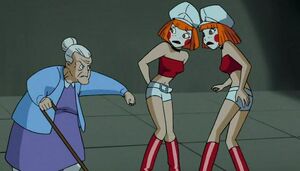 The Dee Dee Twins with their grandmother, Harley Quinn. 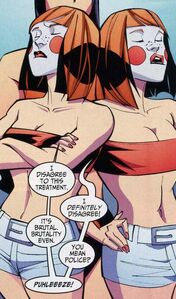 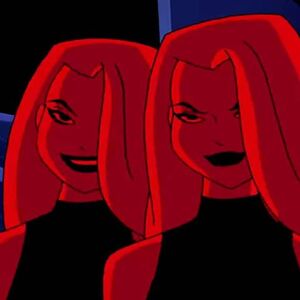 The Dee Dee twins as civilians.