King of the seas

Inflicting pain upon others and listening to their screams.

Take over all of Earth's surface and use humans as food
Kill the heroes who oppose him, even Saitama (both failed).

The Deep Sea King, or also simply known as the Sea King, is a major antagonist from One Punch Man. He serves as the main antagonist of the Sea Monster Arc.

He was voiced by Rikiya Koyama in the Japanese version of the anime, and Keith Silverstein in the English dubbed version, who also did the voices of Johan Liebert, Chairman Rose, Hawk Moth, Hisoka Morow, Masayoshi Shido, and Aaroniero Arruruerie.

While the majority of the Seafolk people appear to look more aquatic-like creatures, the Deep Sea King is the only one that appears to be more humanoid. He is a large, muscular creature with dark green skin and fins on his face. He wears a large royal crown and cape, as well as very thin red speedos. He also has two tattoo hearts on his chest.

On land, he appears to have a humanoid face. Aside from his fangs, he consists a regular nose and pair of eyes. When he's enhanced by water, his true form is revealed, in which his muscles and fins expand to large masses. His face also transforms into a more monstrous appearance with a large snout and black eyes with small, yellow pupils. He also gains a dark turquoise skin color, as oppose to his brighter green coloring.

The Deep Sea King is a sadistic monster that gains pleasure from inflicting pain upon others. He is a very arrogant individual as he considers humans to be nothing more but food. Because of his beliefs that life started in sea, he is determined to take over both the land and sea. As a result, his mindset is that of a bloodlusted conqueror; he is ruthless and cruel, having no hesitation on massacring innocent civilians.

In combat, he has shown to be quite knowledgable in martial arts as he explains to Puri Puri Prisoner how he should finish off his opponents before demonstrating his combo attacks on him.

Sea King first shows up after all the Seafolk are killed by the A-class hero Stinger, punching him and leaving him unconscious. Inazuma Max, Jet Nice Guy; who had been watching is also attacked, attempting to fight the monster but also ending defeated after his attacks fail to even scratch him.

Sea King is then confronted by the S-class hero Puri-Puri Prisoner, who had just escaped from prison along with Sonic. Puri-Puri and Sea King trade punches, but Puri-Puri is visibly hurt harder, so he unleashes his Angel Mode, attacking Sea King with a barrage of punches. The attack doesn't make much damage on Sea King, who counterattacks with a punch barrage of his own, beating Puri-Puri Prisoner.

Sonic decides to challenge Sea King, confident that he wouldn't lose. He effortlessly dodges all of Sea King's attacks, but as it starts raining Sea King grows bigger, becoming stronger and faster. Unable to cause damage on Sea King, Sonic runs away, so Sea King goes after a shelter dome where people had taken refuge. As he busts through the roof of the dome, some C and B-class heroes who were there attempt to stop him, but they're all easily defeated.

Genos arrives at the place and confronts the monster, damaging him but losing an arm after lowering his guard. Genos loses the fight after protecting a girl from Sea King's acid spit, but before he's finished off the C-class hero License-less Rider stops him. Sea King effortlessly beats him, but License-less Rider manages to buy enough time for Saitama to arrive at the place. Sea King punches Saitama, but his attack has no effect on him. After some bragging, Sea King attacks again, but ends up getting killed with a single punch from Saitama. 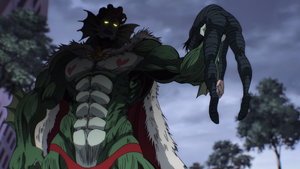 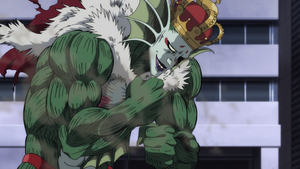 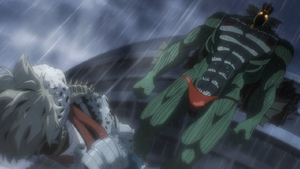 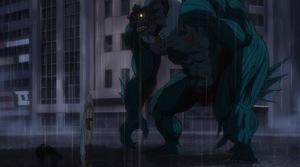 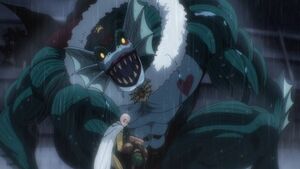 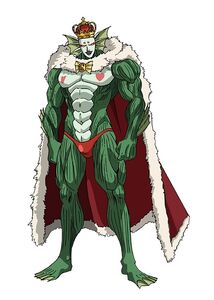 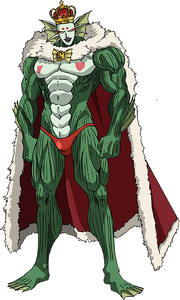 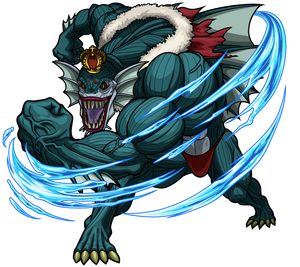 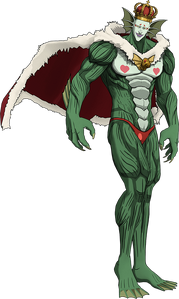 Deep Sea King in One Punch Man: A Hero Nobody Knows.