Manipulation of atoms to harden his body

Murdering people for his own pleasure.
Eating new foods

Eat the chakra fruit to know what it taste like and gain power.

Continue to kill people for his own pleasure (all failed).

Deepa was an inner member of Kara. He was a ruthless individual who saw himself as a hunter who enjoyed seeing others in despair. He worked alongside Victor in the latter's attempt to try and cultivate a replica of a god tree to gain untold power.

He was voiced by Tetsuya Kakihara.

Deepa was a depraved and homicidal member of Kara. He saw himself as a hunter who hunted after his prey. He was metaphorical about how he expressed his desire to see those that he hunted lose all hope before he murdered them. Deepa would kill people on a whim for no other reason besides the joy it brought him. He was incredibly arrogant and saw himself as a powerful fighter that no one can defeat. He also enjoyed mocking and making fun of Boruto, Sarada, and Mitsuki by calling them cowards for running away from him in battle. When questioned about his motives by Team 7, Deepa admits that he was not interested in gaining power for himself. However, when he saw that the god tree was destroyed, Deepa was in anguish over the fact that he could not eat the chakra fruit for himself.

He appeared during one of the Kara meetings where Jigen informed them that one of their bases in the Rain village was compromised. After the meeting, Deepa and Victor continued to work together to try and create a replica of the god tree so that Victor would consume the fruit for immortality. Victor tasked Deepa with finding the Hashirama cell. While on his mission to find the Hashirama cell, Deepa slaughtered many people in a restaurant in the Land of Silence. He later went around the town asking people about the whereabouts of the Leaf ninja since he heard that they were the ones who stole the Hashirama cell. After killing many people who told him the answer he wanted, Deepa encountered the Leaf ninja and the Lightning ninja in a forest where he attempted to kill all of them for the Hashirama cell. However, the Leaf ninja split up to go after the remainder of the Land of Haze quadruplets who had the cell. Deepa fought against Omoi, Kakui, and Marui. Deepa managed to overpower all three of them by himself. He asked them where the cell was at. As Omoi told them to not tell Deepa the information they told him it was with the Land of Haze quadruplets. Deepa killed both Kakui and Marui after they gave him the information and left Omoi alive.

Deepa encountered the Leaf ninja and the last two remaining Land of Haze quadruplets where he killed one of the quadruplets. Victor also appeared at the scene where he told Deepa to fight Bouto, Sarada, and Mitsuki as he dealt with Konohamaru and Mugino. Boruto, Sarada, and Mitsuki fought against Deepa, but he managed to overpower all of them without putting up much effort. Angered over the fact that his brother, Hiruga died, Asaka tried to kill Deepa with a murder-suicide technique called Red Spider Lily. But, the effort failed to kill Deepa and Deepa was concerned that Asaka's technique would have destroyed the cell. Deepa attempted to finish off Team 7, but Mitsuki went into sage mode and carried his unconsciousness teammates to safety. Deepa scoffed at them as they retrieved. He later reunited with Victor and gave him the Hashirama cell. Victor got angry at Deepa due to how his numerous murders could place unwanted attention on them. Victor ordered Deepa to look for one of Urashiki Ōtsutsuki's puppets so that it can be used for his master plan.

Deepa traveled to the Land of Wind where he ate at another restaurant before murdering all the customers and workers there. Deepa briefly encountered Shikadai, Chōchō, and Inojin after the mass murder before leaving the scene of the crime. Deepa encountered Shikadai, Chōchō, Inojin, Shinki, Araya, and Yodo as they tried to take the puppet. Deepa fought them and tried to kill them in his attempt to take the puppet. Deepa managed to overwhelm them and walk away with the puppet, but Shinki destroyed it with his iron sand. Deepa paused for a moment and walked away. He later reported to Victor that the puppet could not be retrieved because it was destroyed.

Deepa sat alone in a room as the god tree replica was beginning to bud. Deepa confronted Boruto and Sarada again. He laughed at them when they said that they would defeat him. Boruto questioned him about his motives. Deepa stated that he was not interested in gaining power and that he was only interested in continuing to kill people for fun and watch them despair. Deepa said he will kill them this time before fight them. Like in the first battle, Deepa still put up a significant challenge to the young ninjas as they could not stop him. However, Mitsuki, appeared to help his teammates against Deepa. Deepa continued his battle. As the battle intensified, the Team 7 trio used their new powers to go against Deepa. Sarada unlocked the two tomoe sharingan, Boruto used the compressed rasengan, and Mitsuki used his sage mode powers. Deepa activated a new mode in his armor to continue to the fight. Boruto with the help of his teammates managed to overpower Deepa with the compressed rasengan which broke apart his armor and sent him flying into the wall defeating him. Deepa was shocked to see the god tree disintegrating and was upset that he would not get a chance to eat the fruit to gain power for himself. A giant rubble crushed his body and most of the building collapsed.

Deepa's body was later found by the members of Kara and his head was reconstructed by Amado under Jigen's orders and placed in a liquid container to revive him. Unbeknownst to Deepa, Victor pinned all the blame and responsibility on Deepa stating that he was the mastermind behind the god tree. Jigen did not trust Victor and his claims and wanted to hear what Deepa said. Deepa told Amado and Jigen what transpired with that incident. When Deepa was done providing them information, Jigen ordered Amado to kill Deepa as he no longer served his purpose any longer. 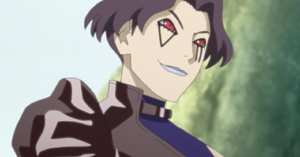