The Spirit of Christmas

The Deer, is the main antagonist of the online-animation The Spirit of Christmas, created by British animator Cyriak Harris.

In the animation, it appears to be snowing. A little boy is sleeping in his bed. As the deer creature appears on the boy's window, and created horrible sounds. The boy looks at it, and believes that it was a dream, so it went to sleep again.

The deer then breaks into the boys room, getting ontop of the boy. As the deer grows from it's back another head of a Santa, which pulls out a Christmas tree out of its mouth. The Santa then brutally drills the boys head with the tree, until there is a big hole. In the end, the deer throws up a present inside of the boy's head. 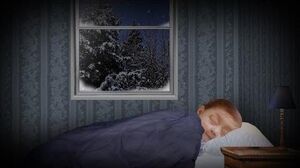 The Spirit of Christmas
Add a photo to this gallery
Retrieved from "https://villains.fandom.com/wiki/Deer?oldid=3548133"
Community content is available under CC-BY-SA unless otherwise noted.