The Deer Woman, sometimes known as the Deer Lady, is a shape-shifting woman in Native American mythology, in and around Oklahoma, the Western United States and the Pacific Northwest. She allegedly appears at various times as an old woman, or a young beauitful maiden, or a deer. Some descriptions assign her a human female upper body and the lower body of a white-tailed deer.

The Deer Woman is said to sometimes be seen as a beautiful woman just off the trail or behind a bush, calling to men to come over. Deer Woman is often said to have all the features of a normal young woman, except her feet which are shaped like deer hooves and her brown deer's eyes. Men who are lured into her presence often notice too late that she is not a natural woman and are then stomped to death. Other stories and traditions describe the sighting of Deer Woman to be a sign of personal transformation or a warning. Deer Woman is also said to be fond of dancing and will sometimes join a communal dance unnoticed leaving only when the drum beating ceases.

According to Ojibwe tradition, she can be banished through the use of tobacco and chant others say that you can break her spell by looking at her feet, which are in fact hooves. Once she is recognized for what she is, she runs away.

The Deer Woman is similar in nature to several other female figures of folklore from other regions of the world such as La Llorona from Mexico and the Southwestern United States, the Fiura of Chile, the Colombian creatures the Patasola and the Tunda and the Iara of Brazil, the Xana from Asturias (Spain), and Naag Kanyas (serpent women) from India. All are females who at times, function as sirens leading men to their death. In Scottish folklore the Baobhan sith is a female vampire said to have goats legs who seduces travelers and feasts on their blood.

This physical deformity marking an otherwise perfect women is a common theme among legendary siren figures. Deer Woman has hooves for feet, La Patasola and the Tunda have deformed feet and La llorona is often said to have no feet by those who see her. The Iara on the other hand is a fish woman with a blow hole in her neck.

In parts of Northern India, there have been reports of people shocked (generally at night) by suddenly discovering to their utter surprise that women travelling along them have cow-hooves instead of normal feet. In other versions of this urban legend, women have normal feet, but fixed the other way around or in local language ਪੁੱਠੇ ਪੈਰ - a sure sign, according to a folk-belief, that the lady is not a human being. 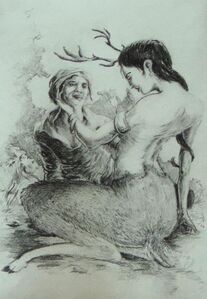 The mythical Deer Lady in an artwork "Charm of the Deer Woman" by Roy Boney, Jr. 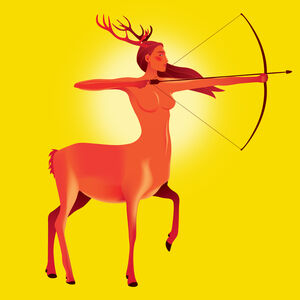 The Deer Woman
Community content is available under CC-BY-SA unless otherwise noted.