Wipe out the Japanese military and all of the country of Japan.
Rule China.

Dehuai Li, or simply Dehaui, is one of the main villains from the videogame Shadow Hearts. He is a Taoist sage that dwells in China and seeks to turn Shanghai into his personal demonic stronghold at the center of his own empire on the continent.

Dehuai was considered the great sage of China, trained by the legendary Chinese Taoist mystic, Master Xifa. He became corrupt with power and was cast away by Master Xifa, but by then he had learned enough sorcery to become a menacing threat within China and took up residence in Shanghai. When the Japanese invaded China, Dehuai began to focus his powers on expelling the Imperialist forces. He decided to create a gate to hell driving-out the military and asserting his power over the populace with his dark servants and with a ritual he called the Demon's Gate Invocation. However a man named Jinpachiro “Ben” Hyuga, who was a special agent within the Japanese military, set out to stop him. Ben was a harmonixer, a being with the ability to transform his body into that of demonic entities he fused his soul with. Ben was joined in his battle against the mad sage with Dehuai's brother, Zhuzhen, who was also an adept student of Master Xifa. Ben tried to stop Dehuai during the final rites tearing his left arm and leg off in the process, but Dehuai still managed to complete the ceremony. With the Demon's Gate Invocation completed, Ben decided to counter it by fusing with the demonic entity Dehuai had summoned. Though the fusion weakened the creature by trapping it in Ben's flesh he could not control it and was struggling, futilely, to keep from becoming possessed. Zhuzhen was left no choice but to kill his friend effectively undoing Dehuai's scheme.

After the Demon's Gate Invocation failed Dehuai sealed himself off in his tower, becoming a recluse. He would spend 15 years nursing his wounds, replacing his limbs and planning his revenge. First thing Dehuai did was focus on wiping out Hyuga's family. He sent several demons to inhabit the bodies of the Hyuga family's neighbors. The demons ate their hosts' families and finished off the village by going after the Hyugas. The demons would claim the life of Ben's wife but the trauma of seeing her die in front of him would trigger the fusion power of Ben's son, Yuri. Unbeknownst to Dehuai, his servants were killed by a newly awakening harmonixer. Dehuai established connections with a local gangster in Shanghai named Wugui, he gave Wugui mystical powers on the condition that Wugui supply him in his isolation and pledge his loyalty to him upon his recovery. It was in this period of isolation that Dehuai would encounter a warlock calling himself "Roger Bacon". Recognizing the name of the legendary Alchemist, Dehuai listened eagerly to Bacon's proposal. Bacon had a book called the Pulse Tract which he would offer Dehuai in order to attempt a second ritual. As Dehuai looked over the book he came to the conclusion that Bacon did not know what he had and was more than willing to take advantage of the British warlock's generous gift.

Dehuai spent the remainder of his 15 years in seclusion perfecting his complex ritual, this time with the extremely potent Pulse Tract adding to his task. For his second ritual Dehuai was going to undertake what he called the Reverse Demon's Gate Invocation, which would summon instead of a demonic entity, an incarnation of the very planet's wrath. Dehuai's research hit a snag though when he found that to catalyze the ritual he would need to siphon the life force of a being with a profound spiritual connection to the divine. Roger Bacon offered to get one such being for Dehuai; the daughter of a rival of his, her name was Alice Elliot. Bacon failed to kidnap her and she escaped twice, once after he killed her father and a second time after the interference of a young man that came to her aid on the Trans-Siberian Express. When Bacon reported back to Dehuai he told him what happened and mentioned the name of the young man, Yuri Hyuga. Yuri also had the power of a harmonixer and Dehuai realized that fate had placed the key to his power in the charge of the son of his dead nemesis. Bacon offered further assistance but Dehuai decided to under-take Alice's capture himself since she was now in his home-territory of China and he would have an opportunity kill the young Hyuga in the process.

Dehuai eventually did capture Alice and siphoned off nearly all her power in his mystical device to catalyze the Reverse Demon's Gate Invocation. But by the time the invocation had run it's course Yuri and his friends had broken into his tower and battled the wicked Taoist sage. Dehuai escaped death in the first encounter and fell back to the ritual site as Yuri released the weakened Alice. Dehuai's ritual was once again disrupted by a troublesome interloper and Yuri pursued Dehuai for a second battle. The second battle with Yuri proved to be Dehuai's last but Dehuai used the last of his dwindling life force to power his Reverse Demon's Gate Invocation. Alas even with his dying declaration powering the ritual, it still was not enough to fuel the sophisticated spell. It was moment's after Dehuai's meaningless sacrifice that Bacon appeared and effortlessly gave the spell one final push which sent the Reverse Demon's Gate Invocation into overdrive. Though Dehuai thought Bacon was just a magician wannabe devotee of Dehuai's 'great power' it turned out Bacon was just planning on using him to preform Reverse Demon's Gate Invocation to summon the Seraphic Radiance which Bacon hoped would destroy the world.

As an Earth Sage, Dehuai has the power to draw upon all four major elements. Ha can also control apparitions and possess animals. His power to possess animals extends even to Xiaofang, Master Xifa's cat familiar given human form. Dehuai has the power to seal the spiritual totems of nature, the Yamaraja, and bind them to his will once their shrines are destroyed. Dehuai has adept training and knowledge in preforming mystical rites even if he is unable to succeed in his final endeavor.

Dehuai voices much hatred for the Japanese for their occupation of China but has never shown any real compassion for his people. It may be that Dehuai genuinely did care for his people enough to set off his hate for the Japanese when he first left Master Xifa's tutelage to fight them or it is entirely possible that he just used the Japanese as a scapegoat to focus his efforts on as his powers grew. Dehuai is also somewhat of a pervert: He relishes Alice's pain while she is strapped into his machine and the player can even choose to have Alice appeal to his more perverted nature to get him to leave behind some special items in the room for Yuri to find when he saves her. Dehuai keeps a pornography book to the side of his device, one that was not there before Alice passed-out from pain. Ultimately though Dehuai is a power-hungry madman with aspirations of godhood, no matter how he tries to justify it. He is a considerably vindictive man as well, in light of both his focus on the Japanese in general as targets because of their occupation and considering the first thing he did when he went into seclusion was summon some demons to kill the family of the man who gave his life stopping Dehuai's first plan. Dehuai is also massively egocentric to the point of being somewhat naive, considering he viewed the man who gave him the key to his supposed god-hood as nothing but a novice paying tribute to his "greatness".

Though Dehuai is ultimately played for a pawn and thrown aside after the first half of one game in the series he is easily one of the most significant villains to affect Yuri directly even compared to Yuri's personal demons the Four Masks or Fox Face. While other villains like Albert Simon or Kato are more dangerous Dehuai has personally killed or had a hand in the deaths of more personal friends of the heroes than perhaps any other villain in the entire series. Some of the people Dehuai had a direct hand in the death of are: 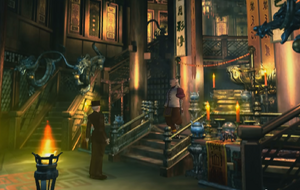 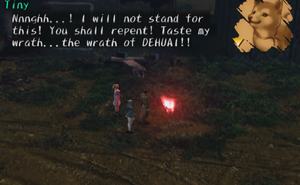 Even while possessing a puppy Dehuai will not accept mockery. 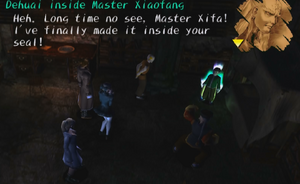 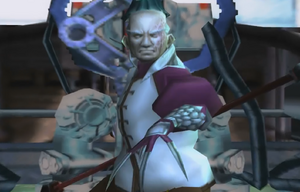 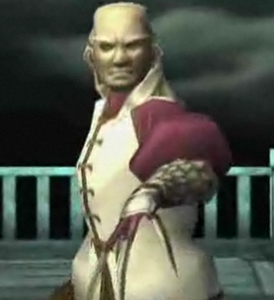 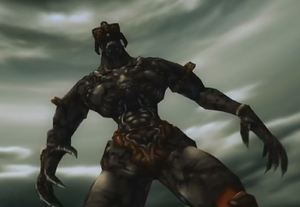 Second Fight with Dehuai - Dehuai as Yamaraja: Calamity
Add a photo to this gallery

Retrieved from "https://villains.fandom.com/wiki/Dehuai?oldid=3289609"
Community content is available under CC-BY-SA unless otherwise noted.