Leader of the Barton Foundation
Benefactor of the Mariemaia Army

Oppressing anyone who would defy the rule of the Barton family.

Power-Hungry Tyrant
Dekim Barton is the tyrannical ruler of the Barton Foundation and the overarching antagonist of Mobile Suit Gundam Wing, as well as the main antagonist of its OVA epilogue trilogy Endless Waltz.

He is the maternal grandfather of Mariemaia Khushrenada, the daughter of Treize Khushrenada, who he placed in charge of the Mariemaia Army. He seeks to conquer the world and use Mariemaia as his figurehead. Prior to the series, he was the one responsible for financing the development of the five Gundams and for formulating the original Operation Meteor that was later used by the White Fang.

He was voiced by Eisuke Yoda in the Japanese version, who also voiced Führer Taboo in Dai Sentai Goggle V. In the English dub, he was voiced by Michael Dobson.

Dekim Barton was once top aide to Heero Yuy, a politician who advocated the colonies be given autonomy from the United Earth Sphere Alliance. After Heero Yuy was assassinated by Odin Lowe, Dekim tracked down and killed him.

Later, Dekim founded the Barton Foundation and began amassing military technology and other resources for his plans to conquer the world and instate the Barton family as rulers of the Earth Sphere. He funded a group of scientists to create superior mobile suits, producing the Gundams, which he schemed to use in a plan called "Operation Meteor", which, under the pretense of avenging the late Heero Yuy, involved the dropping of the X-18999 colony on Earth to eliminate two billion of the planet's population.

However, the scientists Dekim employed disagreed with the grisly methods he was employing and, after hearing of his true intentions from his son Trowa Barton to simply conquer the Earth Sphere and establish a dictatorship under the Barton Family, allowed the Gundams to be seized by anti-Earth government rebels.

After the conflict between the colonies and ESUN ended in the downfall of the Romefeller Foundation and dissolution of the White Fang and OZ, Dekim put his plans into motion. Using his granddaughter Mariemaia Khushrenada's lineage to Treize Khushrenada, Dekim attracted former soldiers of OZ who were supporters of Treize to join the Mariemaia Army led by Mariemaia, which purported to continue on Treize's ideals. In fact, the army was simply a private military force for the Barton Foundation and Mariemaia was little more than a figurehead for Dekim's own agenda. Among those who joined the Mariemaia Army was Gundam Pilot Chang Wufei, who was interested in the peace militarism would bring about.

Once ESUN dismantled all mobile suits in favor of a new era of peace, Dekim and the Mariemaia Army began their attack on Christmas Eve A.C. 196. The Mariemaia Army kidnapped Vice-Foreign Minister Relena Darlian of ESUN and the Serpent mobile suits of the army invaded the Earth. However, the Mariemaia Army faced opposition from Zechs Merquise, who attacked their fleet in the Tallgeese Fleet. After taking out a chunk of the fleet, Zechs attempted to destroy Dekim's MO-III base but was forced to stop when Dekim threatened to go through with the original Operation Meteor and drop X-18999 on the Earth unless Zechs surrendered. However, the Gundam Pilots were able to prevent the colony drop by disabling the colony's engines and Zechs fired the Tallgeese's particle cannon at the MO-III, but Dekim had long since left the shuttle before the beam could hit.

After Dekim returns to Earth, the Mariemaia Army occupies the ESUN capital at Brussels, Belgium. The Gundam Pilots then launched a counterattack on Dekim's forces and attacked his army of Serpent mobile suits. Relena attempted to broadcast a message calling for peace and for the people to stand up against the Barton's militarism, but Dekim cut her transmission short.

As the Gundam Pilots manage to break through the Mariemaia Army's defenses, matters are only made worse when the civilian population rises up against the Bartons. Dekim calls for Mariemaia to rise up to her responsibilities and orders her to execute Relena. However, after being slapped by Relena, Mariemaia comes to her senses and refuses to be her grandfather's tool any longer. Dekim then decides to execute Relena himself, mocking her by saying the public will always obey the victor. Dekim shoots her, but Mariemaia gets in the way and sacrifices herself to take the bullet, saving Relena. Unfazed by his granddaughter's injuries, Dekim declares he can always make another Mariemaia and rants about how the Bartons are the rulers of the world. Before he can try to kill Relena again however, Dekim is shot dead by one of the soldiers loyal to Treize he convinced to join the Mariemaia Army upon realizing that he had betrayed the ideals of Treize by going along with Dekim's plan. 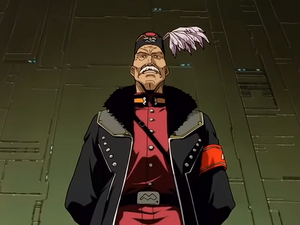 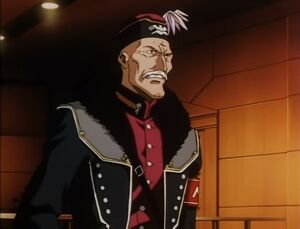 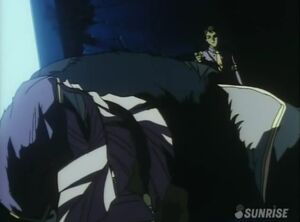 Retrieved from "https://villains.fandom.com/wiki/Dekim_Barton?oldid=4287354"
Community content is available under CC-BY-SA unless otherwise noted.