Leader of the Black Viceroys

Make his gang the most ruthless in Chicago by using his military strategies.

Delford Wade, also known as "Iraq", is a major antagonist in the 2014 video game Watch Dogs.

He is the leader of a vicious gang called the Black Viceroys, and uses his past military training to come out on top in street warfare. Wade and his gang also act as muscle for powerful Chicago crime lord, Lucky Quinn. He is also the arch-rival of Aiden Pearce.

He was voiced Jerod Hayes.

Delford Wade was born in 1987 and was raised by his family alongside his cousin Tyrone Hayes, and later joined the United States Army during the 2000s. After serving in Iraq, he was honorably discharged and became leader of the Black Viceroys, and was nicknamed "Iraq" because of his time in the military.

In 2012, Iraq attempted to hack in the Merlaut Hotel (owned by Quinn) in order to get the aforementioned video, but failed when he encountered two other hackers in the system, and only got a corrupted file. Quinn, who was unaware of Iraq's attempt, asked Iraq to scare the two hackers. Iraq then hired Maurice Vega to kill Aiden.

In 2013, Iraq managed to acquire a briefcase containing the guest list for Lucky Quinn's auction. A Club man was later sent to Rossi-Fremont to get the case back, the scene being witnessed by Aiden and Clara who hacked in the cameras. After receiving an annoyed call from Quinn (who called Iraq a stoat), he disparaged the gangster, labeling him a "leprechaun", then asked what a stoat is. Another Viceroy gave another laugh by answering Iraq, saying that a stoat is a weasel, prompting Iraq and the Viceroy to have a small laugh, before Iraq crushed the offending member's skull with the briefcase.

Iraq later provided security for Quinn's auction and personally met Nicholas Crispin, who was actually Aiden Pearce in disguise, having killed the real Crispin to get close to Iraq to clone his RFID card.

Iraq later catches Bedbug in his server room. Knowing that his cousin couldn't have gotten in by himself, he held him at the edge of a window. Bedbug confessed that an unknown man had put him up to this. Discovering a wire on Bedbug, Iraq alerted him men to the intruder, though Aiden is able to escape. Iraq then questioned Bedbug if he knew anything about Rose Washington. When he was certain that Bedbug knew nothing, he spared him.

When Aiden later assaults Rossi-Fremont and gets to the servers, Iraq confronts him as he was leaving. Iraq thought it was Crispin but realizes it is actually Aiden Pearce. Aiden accuses him of being the second hacker from the Merlaut, to which Iraq expresses confusion, as they had never met. As Aiden was ambushed by another Viceroy, Iraq makes a run for it and orders his remaining gang to kill the vigilante. When his men were all killed, Iraq personally involved himself and was killed in the attempt. 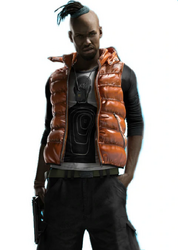