Being with Samson (formerly)

Delilah is one of the prominent women in the Bible and she is also a villain in the Book of Judges.

Delilah was the lover of the strongest man in the world, Samson. The Philistines were the enemies of Samson who were always defeated by Samson because of his godlike strength and they feared him. The lords of the Philistines wanted to know where Samson got the monstrous strength from and how to defeat him.

The Philistine lords knew about Delilah's relationship with Samson and they approached Delilah and made a deal with her: If she can find out the secret behind Samson's strength, each of them will give her 1,100 pieces of silver. Delilah immediately agreed.

Delilah approached Samson three times to ask him his secret, and three times he gave her false answers. However, he gave her his true answer on the fourth time by telling her that he did not cut his hair in fulfillment of a vow he made to God.

As Samson was asleep, Delilah cut seven pieces of Samson's locks so that she can explain to the lords the secret and she was awarded and Samson was captured by the Philistines to be taken as prisoner and he had his eyes put out. In some stories, she felt remorse over her actions but that is never shown. In a modernized movie called Samson and Delilah, she seems to be redeemed and still alive compared to other movies where she died. 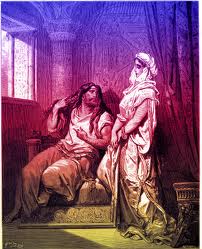 Delilah wanting Samson to tell her his secret. 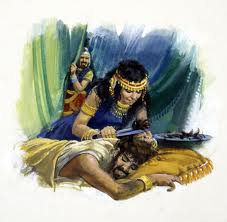