Killing those who have wronged him or stand in his way.

Kill those that have bullied him (all succeeded).
Kill David Banner and his alter-ego Hulk (both failed).

Mutated Monster
Dell Frye (or sometimes spelled Del Frye) is the main antagonist of the two-part The Incredible Hulk episode "The First". It is revealed through his character that David Banner was not the first person to be exposed to such a high level of gamma radiation and become a creature.

Another version of Dell Frye would later appear in the Immortal Hulk comic book series but with a dramatic new design and backstory - being a gamma-irradiated serial killer.

Dell Frye was an assistant for a well known scientist by the name of Dr. Jeffrey Clive in a town called Vissaria. It was said that he suffered from some sort of disease involving his blood, which is implied to have caused him to become the butt of many of the townspeople's jokes.

Apparently, his disease was so deadly, Dr. Clive was convinced that he was going to die. So he decided to use a gamma chamber he built to cure him. At first, Dell didn't feel any different until a day later when he was lifting some heavy equipment by himself. He hurt his back, which in turn angered him and caused his first transformation into the creature. He then became noticeable to the public, who put together that the creature was connected to Dr. Clive somehow, since it appeared after the panels connecting to his gamma chamber turned on.

His second transformation began when he got into a fight at a bar with a farmer, Frank Townson, who apparently bullied him often, along with a few others. After the fight, he somehow managed to transform without anyone knowing about him changing. He then brutally killed Townson, but not before Townson managed to take a shot at him. The bullet wound healed within a day.

Dr. Clive became worried seeing as to how the creature's actions were based entirely on Dell's own personality. It would not kill unless he himself was willing to kill. So he developed a serum that would cure Dell of the creature. After he injected him, Dell was knocked out and remained that way for a few days. It's not quite explained how, but apparently, Clive died during the days that Dell was still sedated. It remains unknown as to how he died, though it's possible he was killed by angry townspeople.

Dell never gave up on finding a way to turn himself back into the creature. Unfortunately, for him, he had no knowledge of how Clive did it and as time went on, he couldn't read his instructions. He often visited Clive's mansion, working days and nights trying to find a way to make it work, but to no avail. Things kept getting worse for him as he became afflicted with arthritis, and always getting constantly picked on by others.

One dark and stormy night, in 1980, while Dell was working in the lab, some teenagers crashed their car into a tree. They saw through a window that the light was on the lab and decided to go to the house to use his telephone. Unable to get his attention by knocking, one of the kids, Walt, decided to break in, go upstairs, and get help. Dell heard him coming, and not wanting to expose himself, he hid behind some curtains. Walt had a terrible "curiosity killed the cat" moment when he decided to turn on Dell's gamma chamber. It makes a certain sound that interests his brothers and sisters.

Not wanting to let Walt ruin anything, Dell realized he had to think fast. When Walt heard a noise from behind the curtains, he opened them, only to be attacked by Dell. Somehow, he managed to kill Walt and leave the scene of the crime (possibly through the trap door in the lab) with no trace of evidence just before Walt's brother Case, ran up after he heard him screaming to find his body. It's unknown how he died exactly, but a citizen told David that his body was found "all cut up". So he was possibly stabbed to death or bludgeoned.

A year later, Dell was confronted by David Banner, who knew about the creature, and was looking for answers to how he came to be so he can find a cure for himself. Dell was not pleased as he didn't understand why he kept asking him questions. When he kept questioning Dell, Case and his brother, Willie, confronted David with a club thinking that he might have somehow been involved in their brother's murder. It led to a fight, which in turn led to David transforming and overpowering the teens. Seeing this as an opportunity to change himself again, he confronts David's creature in the woods and manages to get him to his lab before Case and Willie can shoot him.

After the Hulk changes back, Dell uses David to help him figure out how Clive used the machine, and would cure David himself in return. Unfortunately, for David, Clive had not been able to finish his notes on the cure before he died. All they had left was the serum. During the time David had shown Dell how the chamber worked, Case and Willie are spying on them and see panels open, as well as recognize the sound they make. Convinced something bad will happen, especially since they saw David's creature (thinking he was Dell's creature), they try to convince Sheriff Carl Decker to do something, but to no avail. They then decide that if he won't do something, they will.

When David and Dell are working on David's cure, Dell demands that he use the chamber first in order to change himself back to cure his arthritis and make him feel "strong again". David refuses, seeing as to how Dell's creature is obviously more dangerous than his own. This leads to an argument, and Dell let's it slip that he killed Walt a year ago. Realizing he is definitely not getting anywhere with David, he knocks him out so he can use the chamber on himself. Case and Willie manage to start a small fire in the lab, but it does nothing to stop the power hungry Dell.

He puts himself under the table for the injection, just as David wakes up to try and turn off the machine. But he's too late. In a fit of rage, Dell transforms into the creature and knocks David out cold before running into the woods through a trap door. During his rampage through the woods, he nearly kills a deer with a boulder, as just another indication of  how bloodthirsty Dell's creature really is. After he changes back, David tries to convince him that he has enough substance in the serum to cure both of them. But this only leads to Dell threatening him ("...you better not do anything against me. Because you know when I get mad what I can do!").

Taking advantage of his own power, Dell provokes a man who had been bullying him for a while, Brad, so that he would beat him up, causing him to transform into the creature and then kill him. This plan did not work the first time, given the sheriff had arrived to prevent any sort of fight. Dell then confronts Clive's fiancé, Elizabeth Collins, whom he has been in love with, and attempts to win her heart. However, although she cares for him, she cannot find herself to be with anyone except Clive. Dell then declares that she's just like everyone else, and leaves. Dell then confronts Brad one last time and provokes him enough to beat him up, knocking him into the supply closet.

He transforms and attacks Brad and his friends, throwing Brad out the window, killing him. When David finds out about this, he convinces Elizabeth to lure Dell to her house for him to be sedated. Dell had been given orders to leave town by the sheriff who suspects him of being involved with the creature. When Dell is about to leave, Jack McGee comes over, thinking he is David. When Elizabeth calls him, telling him she has changed her mind and wants to be with him, McGee attempts to take Dell with him, at gunpoint. Dell then knocks him out and goes over to Elizabeth's house.

Once he gets there, David injects him. However it's not enough to sedate him and he fights David, but Elizabeth knocks Dell out. When they get to Clive's mansion to put him on the table and change him back, Dell transforms before they can do so, and destroys David's only cure. This angers David, he transforms, and they both fight-destroying the gamma chamber in the process. Sheriff Decker, as well as Jack McGee, manage to arrive for the sheriff to shoot Dell to death. The creature falls on the ground and reverts back to Dell and then he dies. David as his creature, manages to escape. Then David walks with his bag and tries to find another cure. 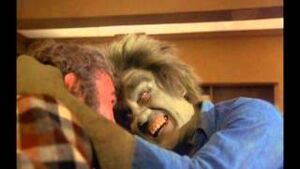 Dell about to kill Brad as the monster. 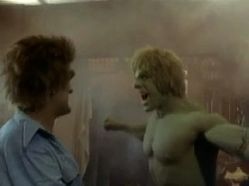 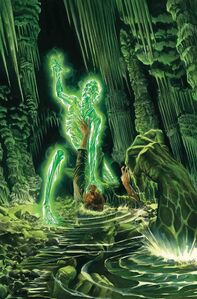 Dell Frye in the Immortal Hulk