Villains Wiki
Register
Don't have an account?
Sign In
Advertisement
in: One Piece Villains, Pirates, Hybrids,
and 20 more

Dellinger is an antagonist in the anime/manga One Piece. He is an executive of the Donquixote Pirates' Diamante Army. He is a hybrid between a Human and a Fighting Fish Fishman.

He was voiced by Kōki Miyata in the Japanese version, and by Brandon McInnis in the English version.

Dellinger has shaggy light hair that is longer in the back. He wears light colored hoop earrings on his ears, and a white baseball cap with horns coming out of it on his head. The mark on the center of his hat is shaped like a dark Fighting Fish. He wears a long sleeved shirt with a giraffe-like design on it. He has an effeminate appearance, wearing shorts and stilettos.

Being part Fishman, he has a Fighting Fish dorsal fin located on his back and horns coming out of his head. This fin appears to be retractable as Dellinger was able to keep it hidden ue n participated in Doflamingo's takeover of Dressrosa.

After Monet opened the gates to the royal palace, he and the other high-ranking members of the Donquixote Pirates invaded the palace. til he attacked Blue Gilly. He also has retractable fangs that that he can grow out by forcing his human teeth out of their gums.

Dellinger has a flamboyant and flashy attitude that matches his eccentric fashion sense. He seems confident in his abilities, as well as a bit arrogant, as he tells Bellamy that he is going to kill him right after demeaning him. He also is a bit too carefree, as he apparently has a habit of blabbing things he knows to others, such as secret information like Doflamingo's order for him to dispose of Bellamy. Because of his confidence, Dellinger holds his own heritage of Fighting Fish fishman with pride.

In battle, he is rather sadistic and bloodthirsty, such as when he was fighting against Suleiman. Dellinger also believes that strong people do not require honor, as he mocked Ideo for having such ideals. That said, he's prone to cockiness and as such, doesn't take a lot of situations seriously. This lead to him suffering a major wound from a sleepwalking Cavendish when Gladius tried to warn him to stay back but he didn't listen.

He was also shown to be easily annoyed when someone else hinders him from killing his intended target. He was very angry at Bartolomeo for protecting Bellamy and swore retribution for his actions. Stating that this was his "family's business", he also shows strong bonding to his own crew, which he considers his family.

Born from a human and a Fighting Fish fishman, Dellinger has been a member of the Donquixote Pirates since he was a newborn infant after being found by Jora. The crew was once based in the North Blue at a port town called Spider Miles. After Law had been with the crew for about a week, he was seen sitting on Jora's lap drinking milk out of a bottle while the crew was dining together. When Doflamingo slammed his hand on the table in frustration when Jora wrongly stated that Law's sickness was contagious, Dellinger threw his hands up and started crying.

After Law became an official member of the crew, Dellinger went along with them as they spread their influence while traveling to the Grand Line. However, Law later left the crew after Rosinante fed him the Op-Op fruit.

When he was six, he participated in Doflamingo's takeover of Dressrosa. After Monet opened the gates to the royal palace, he and the other high-ranking members of the Donquixote Pirates invaded the palace.

He was first seen introduced in the Corrida Colosseum as a representative for the Donquixote Pirates in the tournament for the Mera Mera no Mi.

Later, as Bellamy was preparing to assassinate w:c:hero:Monkey D. Luffy in order to be accepted as an officer of the Donquixote Pirates, Dellinger approached him and asked him if he was finished with the assassination. In response to this, Bellamy asked Dellinger what he wanted. Dellinger then revealed he was there under Doflamingo's orders to kill Bellamy, saying that Doflamingo had no confidence in him and considered him an eyesore. Bellamy responded by angrily questioning Dellinger's previous statement.

Dellinger severely wounded Bellamy but before he could kill him, Bartolomeo interfered and protected Bellamy with his barrier. Meanwhile, Dellinger received instructions from Diamante via Den Den Mushi to guard the SMILE factory alongside Lao G. Dellinger was furious at Bartolomeo's interference and, as he angrily walked away, he swore that both Bartolomeo and Bellamy will not leave Dressrosa alive.

Dellinger was later seen at the toy house, standing next to Machvise and Señor Pink over a beaten Franky.

When Sugar lost consciousness and her powers became undone, Dellinger panicked as all the toys throughout Dressrosa returned to their original forms.

After Doflamingo trapped Dressrosa in his "bird cage" and put a price on the heads of twelve people (including Franky), Dellinger, Señor Pink, and Machvise noticed that Franky disappeared from the Toy House.

They were surprised that the Marines were not taking any action against the Donquixote Pirates even after the truth about Doflamingo was exposed. Then they see Luffy, Zoro, and Law dropped down from the sky and landed right in front of them. The three officers wasted no time engaging Law and the two Straw Hats in combat. While attacking Luffy, Dellinger was kicked from behind by Zoro. This caused him to accidentally kicked Machvise instead. The battle was interrupted by the arrival of Issho and Pica, who appeared as a massive stone giant.

He was later seen on the second level of the new King's Plateau guarding the palace alongside Machvise, Baby 5, Lao G, and Gladius. While Luffy and his allies were easily fighting their way through Doflamingo's troops, Dellinger began to wonder why Issho and his Marine platoon were not intervening. Baby 5 looked through her binoculars and informed him that the Marines were hindered by Sabo.

As the battle unfolds, Dellinger commented that not a single one of Luffy's allies has been defeated on the first level. After the Colosseum fighters reached the second level, Dellinger confronted Suleiman and knocked him down by headbutting him with his horns, piercing The Beheader's chest. When the Colosseum fighters banded together to create an opening for Luffy and Cavendish, Dellinger attacked Dagama, but Dagama managed to grab ahold of him.

After Blue Gilly stopped some of the Donquixote Pirates' troops from attacking Luffy and Cavendish, Dellinger charged at him and kicked him in the face. Afterwards, Dellinger came face to face with Ideo.

Ideo attempted to attack with an explosive punch, but Dellinger easily dodged it. When he was distracted due to Pica changing the shape of the plateau, Ideo managed to land a hit on him.

The wound, however, was superficial, and Dellinger later punctured a hole on Ideo's stomach. Thinking that Ideo has fallen, Dellinger checked the situation on the third level and Gladius asked him to assist him. Before leaving the second level, he was grabbed by Ideo. Remarking on how stubborn Ideo was, Dellinger took off his hat, revealing his horns, and showed the fangs he inherited from his fighting fish lineage, which he then used to launch a decisive assault on Ideo, defeating him.

With the fall of his adversary, he went to the third level to assist Gladius in the battle against Cavendish and Bartolomeo. Whilst remaining his cheerful self, he questioned Gladius as to the reason of his delay regarding the battle. He also commented that together the two of them would be unstoppable. Dellinger was then taken by surprise by what seemed to be a gust of wind and was cut down by a sword belonging to Cavendish shortly after. It was then revealed that Cavendish had made the transformation into Hakuba.

Dellinger has been in Doflamingo's crew for the entire 16 years of his life, starting from his infancy, an impressive feat considering that, according to Diamante, of the 100 people that tried to join the crew, only the strongest remained. At a mere two years old, he was strong enough to lift cannonballs and load them. At six years old, he assisted in the takeover of Dressrosa being the youngest member of the crew.

As one of the officers of the Donquixote Pirates led by a Shichibukai, as well as bearing fishman genes, Dellinger is no doubt a powerful fighter. In fact, he is one of the well known participants of the Corrida Colosseum, where the fighters' calibers are rather high. It is said that when the four officers enter the tournament, they have a 100% chance of victory.

Being born a hybrid human-fishman, Dellinger is stronger than the average human, going by his ability to lift cannonballs at two years of age without problems and the fact that fishmen are supposedly ten times stronger than humans, but it's unknown if he is as strong as an average fishman in relation to a human. Having a pair of horns, he can use them to gore his foes through headbutts in a spear-like fashion attack, a technique he has shown to be proficient with, but one can still immobilize him by catching and not letting go of his horns.[9] He seems to have the ability to grow new teeth whenever he wants, similar to Arlong, as well as choose between human teeth and sharp fighting fish fangs.

He is quite confident in his own abilities and even outright told Bellamy, a pirate with a bounty of Beli195,000,000 who is older than him, that he was going to kill him. Doflamingo has some faith in him since he assigned him the task of killing Bellamy. This faith was proven to be valid, since he defeated Bellamy (albeit while wounded) with relative ease, though he could not get past Bartolomeo's barriers. He is also unusually swift as he can move fast enough to create temporary duplicates to surprise unsuspecting foes, as well as dodging Ideo's attacks.

He is apparently extremely proficient in using kick-based attacks, seen as he was able to easily knock out Blue Gilly, a powerful combatant, with a single kick, while leaving no time for the latter to react. 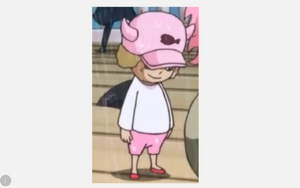 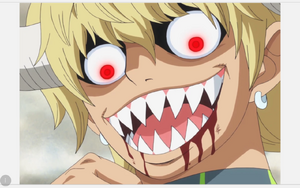