Taunting his enemies before killing them.

Aid Eric Qualen to steal $100 million in uncirculated US currency.

Delmar is the supporting antagonist in the 1993 live action film Cliffhanger. He is one of Eric Qualen's henchmen.

He was portrayed by Craig Fairbrass, who is also known for playing Dan Sullivan in EastEnders; Pat Tate in Rise of the Footsoldier series; Lincoln Burgess in Avengement; Nick Barton in The Bank Job; Freddy "Dead Cert" Frankham in Dead Cert; and Eddie Banks in Villain.

Delmar is a sadistic ex-soccer player turned henchman for his boss Eric Qualen as he joined him and his fellow international thieves in his plan to steal $100 million dollars in uncirculated $1,000 bills for international banking transactions from a U.S. Treasury transport plane flying over the isolated Rocky Mountains.

Despite the fact that he worked with Eric and the rest of his henchmen, he did not get along with one of his partners in crime, Kynette. Delmar seems to be the most sadistic of the group, given that when two teenagers were base jumping in the mountains they were invading as part of their plan, Delmar laughs when Kynette shoots one of them and even hands him a gun so he can shoot the other.

As they are taking Hal Tucker hostage once they are discovered, Delmar shoots the Search-and-Rescue pilot, Frank (who is unaware of their true agenda) to death before Hal can warn him.

When the last case of money nearly reaches its end, Richard Travers orders Delmar to kill Hal quietly - which he complies as Travers left them to find the last case himself. Instead of finishing the job right away with a pistol, he starts beating up Hal by kicking him like a soccer and nearly throws him off of the cliff that they are on. However, Hal gains the upper hand by stabbing Delmar's right leg with a hidden knife, causing Delmar to scream in pain. Hal quickly grabs his shotgun from his back and cocks the shotgun to his chest as Delmar's eyes widened in horror as Hal gave one final taunting words: "Season's over, asshole!" and pulls the trigger of the shotgun, blasting Delmar in his chest and throws him off, avenging Frank's death. Travers, unaware that Delmar's body falls to another part of the mountain, tells him quietly.

Delmar was ruthless and gleefully sadistic among the rest of henchman who worked for the psychopathic Eric Qualen. It turns out that Delmar was the most willingly harmful members of the group as he enjoyed hurting his enemies, as the case when he attacked Hal before trying to kill him. But his enjoyment in torturing Hal also proved how arrogant he was to the point where it allowed Hal to kill Delmar when he was unable to finish him off due to becoming too enjoyed with beating him up. 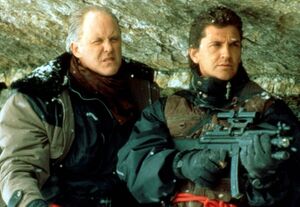