Harry Potter and the Cursed Child

Restore her father Lord Voldemort back to life.

Kill Harry Potter and his children (both failed).

Delphini, nicknamed Delphi, is the titular main antagonist of Harry Potter and the Cursed Child. Although she initially introduces herself as the niece of Amos Diggory, Delphi is in fact, the child of Lord Voldemort and Bellatrix Lestrange and has only one goal, restoring her father.

In the play, she was portrayed by Esther Smith.

Delphi was conceived from a liaison between Voldemort and Bellatrix. She was born at Malfoy Manor, shortly before the 1998 Battle of Hogwarts. As Bellatrix and Voldemort were both killed in the Battle and Bellatrix's husband Rodolphus was imprisoned at Azkaban, Delphi was raised by Euphemia Rowle, a Death Eater. However, the life at Euphemia's was miserable for Delphi as Rowle did not really care for her and only took her in because she was paid for it. During her youth, Delphi was fascinated by Euphemia's pet, an Augurey. It reminded her that the future was hers to make. Eventually, Delphi even got an Augurey tattoo on the back of her neck.

For obvious reasons, Delphi did not attend Hogwarts School of Witchcraft and Wizardry and had no friends during her youth. Her heritage was kept secret from her and she only found out the truth about her parents when Rodolphus Lestrange, not at Azkaban anymore, told her so. At this time, Delphi was also made aware of a prophecy that was about the return of Lord Voldemort. Delphi made it her life goal to return her father to his power.

As Voldemort considered Cedric Diggory "the spare" before he told Wormtail to kill him, Delphi decided that Cedric would be somewhat involved in fulfilling the prophecy. She placed Cedric's father Amos Diggory under a powerful Confundus Charm and made him think that she was his niece, despite neither Amos nor his wife having any siblings. When Amos was put into a nursing home for elderly Witches and Wizards, Delphi accompanied him and acted as his caretaker.

Harry Potter and the Cursed Child

When Amos, who found out that Harry Potter had obtained a Time-Turner while investigating a Death Eater, heads to Harry's house to convince him to use it to revive Cedric (which may or may not have been an idea of Delphi), Delphi accompanies him and meets Harry's son Albus for the first time. She talks with him and gives him the address of the nursing home while urging him to visit her someday. When Albus, who has a stressed relationship with his father, decides to steal the Time-Turner from the Ministry of Magic to revive Cedric, he and his friend Scorpius Malfoy (the son of Delphi's cousin and Harry's old school rival Draco Malfoy) head to the nursing home where Delphi joins them. By use of Polyjuice potion, the three manage to infiltrate the Ministry and obtain the Time-Turner. They head to Hogwarts where they intend to use the Time-Turner to prevent Cedric from winning the Triwizard Tournament. While Albus and Scorpius travel through time, Delphi remains behind in the present.

After stopping Cedric from winning the tournament, Albus and Severus return to a present in which, much to their horror, Voldemort has killed Harry during the Battle of Hogwarts and has absolute control over the Wizarding World. Voldemort seems to be assisted by a mysterious person called The Augurey. With Harry dead, Albus also doesn't exist in this timeline. Scorpius realizes that Cedric needs to die to prevent this horrible future and travels through time once more, stopping themselves from interfering.

Back in their normal time, they meet with Delphi once more and tell her that they cannot save her cousin Cedric. Delphi seems content with that, claiming that Cedric would have understood. However, Albus and Scorpius notice the tattoo on her neck, spotting the Augurey and linking Delphi to the mysterious ally of Voldemort in the evil future. Delphi swiftly snatches the Time-Turner and by displaying immensely powerful magic, disarms Scorpius and Albus. When another student, Craig Bowker, arrives to investigate the noises, Delphi kills him with the Killing Curse.

She then reveals herself as the daughter of Lord Voldemort and reveals how she plans to travel back through time to make sure the future Scorpius saw will come true. Believing in the prophecy, Delphi realizes that Albus, the 'unseen child' needs to be the one who stops Cedric, as the prophecy says so. However, after the three travel back through time both Albus and Scorpius reveal that they would rather die than help her revive Voldemort. Annoyed, Delphi claims that they have no choice as the prophecy states that Voldemort will come back. Albus, however, is convinced that prophecies can be broken.

Realizing what this means, Delphi drags the two boys through time once more, arriving in October 1981, twenty-four hours before Voldemort would kill Lily and James Potter. Intending to stop her father from killing Harry and thus ensuring his survival, Delphi smashes the Time-Turner and leaves the scene, leaving Albus and Scorpius behind.

However, Albus and Scorpius realize Delphi's plan and manage to contact present-day Harry, Ginny, Hermione, Ron, and Draco. With a Time-Turner, the group returns through time to stop Delphi. At Godric's Hollow, they plan to lure Delphi into a trap. Harry transforms himself into Voldemort and waits for Delphi's arrival. When Delphi appears, she believes to be facing her father and reveals her true identity to Harry. Harry manages to lure Delphi into the church where the rest of the group is waiting but there, the transformation fails and Delphi realizes that she's been tricked.

Before Harry can even attack her, she magically locks all doors in the church, preventing the others from assisting Harry. She then duels Harry and proves to be far more powerful than him. However, she has overlooked Albus who was also waiting in the main room. Albus opens the doors and the rest of the group storms into the room. Although she tries, Delphi is unable to fight all of them at once. Harry shoots a spell at her which ties her up.

Harry and the others defeat Delphi, who asks Harry to wipe her mind clean of all recognition of what had happened, not wanting to have the knowledge of her parents as it was too painful for her to not be able to see them or be with them when they were alive. Albus wished to kill her, though Harry states that they are superior to her in many ways and that killing her wasn't the answer to the problem. Harry proceeds to tell Delphi that she will always be an orphan and they return to the correct time, where Delphi would be taken to Azkaban. After Voldemort's death in 1998, Delphi became Salazar Slytherin's last known heir. 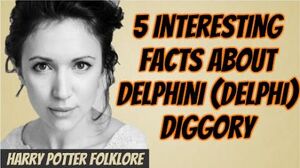