Delta (in Japanese: デルタ, Deruta) is a major antagonist in Boruto: Naruto Next Generations. She was a member of Kara who was interested in retrieving the vessel, Kawaki, for the organization. After her deactivation, however, she is reprogrammed by Amado to protect Konoha.

She is voiced by Houko Kuwashima.

Delta is a loyal member of the Kara. She is interested in advancing the goals of the organization. Unlike other members of the organization, she is easy to enrage when she feels things do not go her way such as kicking and destroying a table out of anger at not knowing what Koji Kashin was doing. She is also interested in moderating Koji Kashin's activities and keeping an eye on him. At times, Delta can be impatient and is willing to rush into a situation by herself to handle a problem such as infiltrating the Hidden Leaf Village. Delta has shown a sadistic and homicidal personality by reminding Kawaki of the beatings she inflicted on him and repeatedly telling Naruto, the Seventh Hokage, that she was going to kill him. In battle, she does not underestimate her opponent, Naruto, and does not fear his power. However when the battle begins to not go in her favor, Delta becomes angrier and wants to viciously take down her enemy. Delta also shows that she cannot tolerate failure by lashing out in anger when she lost in her fight against Naruto and by failing to capture Kawaki. She also seems to have a strong superiority-complex which is shown when she regards Naruto as beneath her with Delta also becoming fixated on killing Naruto after he defeated her.

After being repurposed by Amado, serves as a soldier for Konoha, apparently still remembering her past identity, she takes in stride her new identity as she showed no problem attacking Code, while still retaining her harsh and irritable nature.

Delta appears at a meeting for the inner members. At the meeting, Jigen, talks about the vessel that recently escaped from Kara. After the meeting, Delta has a conversation with Jigen about the Koji Kashin and his activities. She was angry at Koji's mysterious activities and takes her rage out by kicking and destroying the table they were seated at. Jigen, fixes the table she destroyed and tells her that it is okay for her to go and look at what is going on with Koji's mission.

Delta appears near Koji and to watch Kawaki, the vessel. The two are then stunned to realize that Boruto possess the Kama on his right hand with Kawaki possessing it on his left hand. Delta and Koji both witness the fight between Kawaki and Garō and Garō's death from his battle against the teen with the resulting explosion creating a billow of smoke which has Delta praising Kawaki for apparently killing Boruto and his allies. However, it's soon revealed that Boruto used his own Kama to absorb Kawaki's attack, ultimately saving the lives of both himself and his teammates.

When Kawaki passes out, the Hidden Leaf Ninjas, takes him away. Delta wanted to retrieve him and also take care of the Konoha group but Koji tells her that it is okay because Kawaki will not leak any important information to the Leaf Ninjas.

Delta and Koji appear at the Hidden Leaf Village's border. Koji tells her that the security of the village is able to track the chakra signatures that enters the village and that foreign chakra signatures will be immediately detected. Koji goes into the village by himself leaving Delta behind. Delta is angry that Koji left her since she was keeping an eye on him. After some time, Delta infiltrated the Hidden Leaf Village and sets off security because of her unrecognizable chakra signature. Delta encounters Naruto, Kawaki, Boruto, and Himawari. She reminds Kawaki off the beatings she gave him. Naruto confronts Delta and immediately gets into a fight after Delta tells Naruto that she wants Kawaki. During the fight, Delta manages to pin Naruto to the ground with a rock. She removes the rock and is surprised that Naruto immediately healed from the wound and surprised at his strength.

The two continues to face off with Naruto adamant to protect Kawaki from her. As the fight continues, Naruto manages to have the upper-hand in the battle until Delta shoots a laser eye beam. Naruto dodges the high-powered attack. Kawaki explains to Boruto that the laser Delta used is powerful enough to stop regenerative powers. During the battle, Kawaki tells Boruto to not interfere in the fight, but as Delta is about to shoot Naruto with the laser eye beam, Boruto throws invisible Rasengans at her. Delta absorbs them, attacks Boruto, and grabs Himawari and throws the girl into the air and fires the laser eye beam at her. Naruto attempts to save his daughter from the attack by attempting to take the attack himself but Kawaki intercepts it and takes the laser beam. As a result of the attack, Kawaki loses pieces of his arm. Delta wonders why Kawaki would protect the hokage and his family and becomes angrier as the battle ensues since he took her attack.

Delta yells at Kawaki for getting in the way of her attack and losing his arm since he is Kara's vessel and the vessel for Jigen. She continues to fight Naruto and attempts to kill him with her laser eye-beam but Naruto caught the attack in his rasengan and threw it back at her. Delta absorbs the attack with her eyes. With the energy from the attack, Delta attempts to use the laser technique again but Naruto charges up a larger rasengan. Delta mocks Naruto for his move saying that he will only end up getting attacked by her. However, Naruto continues to charge up more rasengans surprising her and causing her to lose the vision in her eyes. Because she overused her powers, Delta got angry at Naruto and attempts to attack him but Naruto attacks her with a super ultra giant ball rasengan technique defeating her. Delta lies at the bottom of the crater conscious. Naruto wants to retrieve her to question her but Kawaki tells him that she is too dangerous and that he should finish her off. Before Naruto can get close to her, Delta's body self-destructs in a large explosion. Naruto and the others are surprised at her suicide but Kawaki tells them that is how Kara operates.

Unbeknownst to Naruto and the others, the drone that witnessed the fight between Delta and Naruto kept data on Delta's consciousness. The drone leaves the village without being detected and makes it to Kara's headquarters and lands on an instrument that connects to three pods, two of which that contains replicas of Delta. Amado presses a few buttons and the drone awakens one of Delta's replicas. Delta angrily kicks open the pod upon her revival and storms out the room. Delta is angry at the outcome of the battle with the Seventh Hokage and wants to kill him to even things out. She lashes out at one of her teammates when he teases her about her failure. She remains angry but Jigen tells her to calm down and that it is Koji Kashin's job to retrieve the vessel. Delta tells him that Koji has not been doing his job the way he should have been doing it by allowing the Leaf Ninjas to take away Kawaki. She informs Jigen that Koji is trying to retrieve more information and that Boruto Uzumaki is another person who contains the kāma seal which stuns her colleagues.

Delta saw Koji and Amado planning on leaving without Jigen's permission. She tried to stop them, but Amado was able to shut her down. 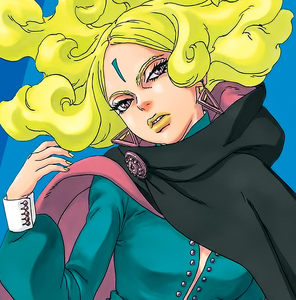