Delta M is the main antagonist of Mini Fighter. His former servant is Marshal.

Delta M originally made a tournament to lure and trick the heroes by attacking them. He made a fake reward which is a nine star card which makes the heroes stronger. He attacked Cro and Marshal with his fire and ordered the brainwashed heroes to attack Cro, Kang, Marshal, Bonny, Hikaru, and Chris. His former servant Marshal was very angry at him for betraying him and Cro begins to battle with Delta M. Delta M explodes the coliseum. When the coliseum was destroyed, Delta M was still inside and the heroes managed to escape from the explosion. Delta M might have survived or died in the coliseum.

In Hikaru's story, he ordered his men to destroy Hikaru's village and bring the Divine sword of Sakura to him. Hikaru swore revenge on Delta M for destroying her village and later she became his slave.

In Raizin's story, he destroyed Raizin's hometown and took the life of his sister Nina. His headquarters were attacked the by special forces that Raizin works for. Raizin went berserk and attacked Delta M's robot minions and swore revenge on him.

He later took the life of Dr. Shade, his archenemy and the mentor of the heroes. The heroes felt heartbroken and began their journey to stop the cruel tyrant Delta M.

Delta M is a humanoid creature with long blue hair and a red vein showing on his forehead. He wears a white diaper and red eyes and a big stomach.

His true appearance has longer hair and spikes sticking out. He appears to be in human size and has a white suit with blue armor.

Delta M is a merciless being that is willing to destroy the innocent in the world of Mini Fighter. He is a cruel tyrant who kills anyone who gets in his way. Delta M is a insane creature that is very rotten towards others and wants to prevent Kang's group from foiling his plans. Delta M doesn’t ever show feelings for anyone except for his minions.

His true form's abilities control electricity instead of fire. He also controls energy and control a gust attack dealt to his foes. 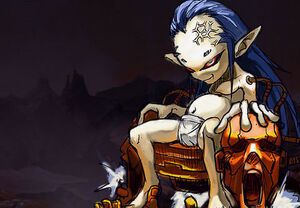 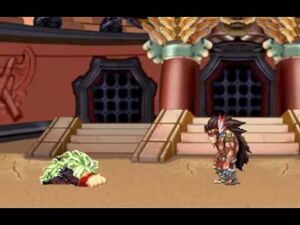 Mini Fighter Episode 6.--The True Winner-
Add a photo to this gallery

Retrieved from "https://villains.fandom.com/wiki/Delta_M?oldid=4345940"
Community content is available under CC-BY-SA unless otherwise noted.