Playing on her electric guitar.

Demencia is the deuteragonist villain of the 2017 Cartoon Network animated TV series Villainous.

She is the crazy assistant of Black Hat, who constantly tries to get her boss to like her, to no avail.

She was voiced by Meli G in Spanish and Melaney Sems in English.

Demencia overall started off assisting Black Hat's dirty work to be able to impress Black Hat and get him to fall in love with her, a cliché ongoing motive that is still going throughout the series.

In the pilot episode "The Dreadful Dawn", she is given a captive superhero as food from a pit by Dr. Flug before breaking free from her restraints (a straitjacket). Demencia was later sent with Flug and 5.0.5 to Arteno City to defeat the hero Sunblast for Penumbra, who wanted to get rid of him for constantly having the sun burn her skin.

Flug goes over his plan to defeat Sunblast, which involves him tracking the hero's location and 5.0.5 covering him, but doesn't involve Demencia at all due to her apparent recklessness; despite this, Demencia disobeys him and proceeds to cause chaos in the city, grabbing the attention of Sunblast. She subsequently attacks him ruthlessly until she accidentally gets tranquilized by Flug before Sunblast defeated all of them. Demencia was later scolded by Flug for ruining his intended scheme while she was in a drowsy state.

The three of them returned to Black Hat manor with a new plan, in which Sunblast (who followed them back to the place) gets shrunk into a small size after Demencia brutally attacked the superhero again, under the pretense of believing that Sunblast wanted Black Hat and Penumbra to be a couple. Demencia later ate Sunblast after he tried to escape before Black Hat calls her and the other's performance "mediocre", and proceeds to angrily berate them for bringing a hero to his manor while at the same time turning into a giant monster.

Demencia has a navy blue vest with a hood that has a reptilian animal on it, presumably a dragon, with her large ponytail coming out of it. She has pink and lime green hair and one eye with a yellow iris. She has blue and red mismatched shoes and leggings, with a metal cuff on one of her ankles.

Demencia is as a energetic, hysterical, mischievous, craving for destruction and troublemaker girl. She also seem to be madly in love with Black Hat, as shown further in "The Perception of Evil" when Demencia created a muscular version of him and lovingly clings to him. Despite this, as shown in "Foul Flower" and "Black Hat Organization Q&A", the thought of Black Hat being a hero is very upsetting to her. Demencia is shown to be scatterbrained, as she tends to go through things without any thought or thinking.

As seen in "The Dreadful Dawn", it has been shown that Demencia has an intense cannibalistic mentality in three instances;

First: she was eating a superhero that was lowered into her pit, during her introduction.

Second: she was eating a cheerleader slowly gnawing and pulling her while wearing her lizard hood over her face when trying to lure out Sunblast.

Third: she was seen catching and swallowing an escaped shrunken Sunblast using her tongue like a frog. 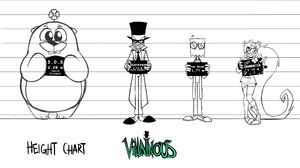 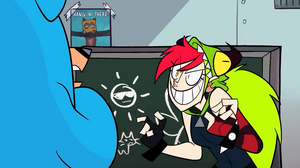 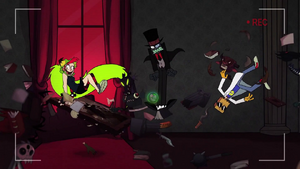 Demencia along with Black Hat and Flug floating in the room 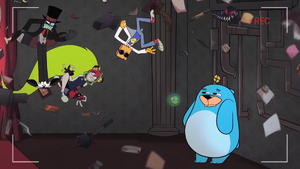 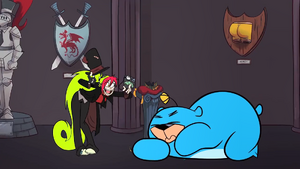 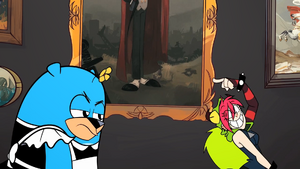 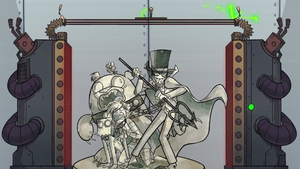 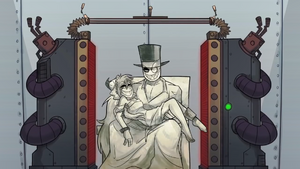 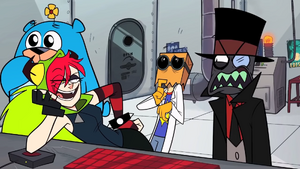 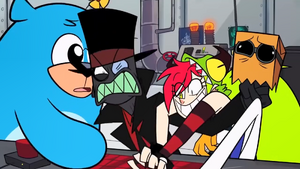 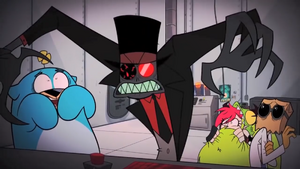 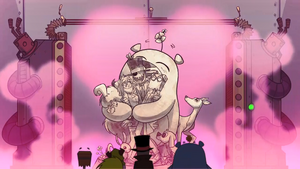 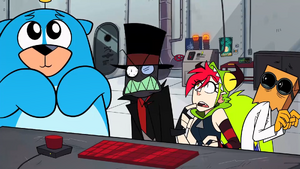 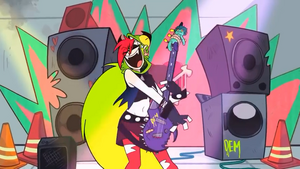 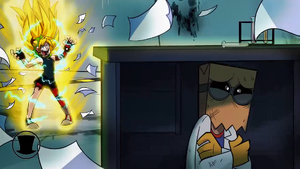 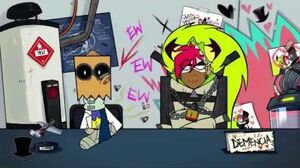