Foulest Creatures to Walk This Earth (by Lupin)

Earth (more commonly Azkaban, but not the entire species)

Can drain the happiest memories from a victim

Consuming human happiness and souls.
Carrying out various tasks under their master's bidding

Prevent any breakouts from Azkaban and punish all Dark Wizards while under the Ministry's order.(succeeded).

Assist Lord Voldemort in taking over the Muggle and Magical worlds as his assassin and soldiers (failed).

As the controversial dark creatures that had been employed by corrupt members of Ministry of Magic as guardians of Azkaban, assassination tool (Dolores Umbridge deployed two of them to dispose Harry once in The Order of Phoenix), and ultimately beasts of war in the same vein with animals used by Muggles/Mundane humans during conflicts, their sapience is heavily debated. They are intelligent enough to be greedy and make a deal with anyone who could provide them victims in return of becoming their workforce and soldiers in addition of following at least simple instructions. For example, Cornelius Fudge once employed two of Dementors as bodyguards in 1995, and for them to escort prisoners in and out of the Muggle-Born Registration Commission courtroom in 1997. Verbal communication seemed to be in the realm of possibility among these foul creatures judging from their ability to communicate what they had heard Sirius Black saying in his sleep to the Ministry.

Regardless of aforementioned benefits as seemingly tamed thralls, Albus Dumbledore, as well as those who understand better how dangerous they could be, rightfully pointed out Dementors as vicious creatures and that they won't ever differentiate between those they chase after and those that stand in their way. He also informed the students to give Dementors no reason to harm them, saying that forgiveness is not in a Dementor's nature. Indeed, these entities reputed to be so evil that they lacked soul of their own.

Dementors appear as tall (around three meters), ominous figures who wear black cloaks, and glide above the ground. A Dementor's face has empty eye sockets, covered with scabbed skin. The skin has a slimy texture, as if something had decayed in water. There is a gaping large hole where the mouth should be, which is used for sucking the soul out of the victim.

Almost anyone who has seen what is under a Dementor's hood is in no fit condition to tell what they saw. Harry Potter is an exception since the Dementor that nearly kissed him lowered its hood before being driven off by the Patronus cast by Harry's future self.

Dementors can drain the happiness and any other positive emotion out of any area. In doing so, they can trap their victims within their own miserable thoughts. Their presence makes any area cold (covered by cold mist in the books while downright covered in icy layers with plants almost instantly withers away via. lack of warmth in films). When they get close enough to their victim, they perform the Dementor's Kiss; a single Dementor removes its hood, forcibly clamp its jaw around the victim's mouth, and consume his or her soul. The victim is subsequently left in a vegetative state, and are unable to move on to the afterlife or become a ghost without their soul. The fate of sucked souls in question was left in the viewers and readers' interpretation, though it's plausible that when a Dementor dies, every single one of soul it consumed eventually freed and pass on, subsequently allowing said souls' vegetative husks to die out at last.

The manner they move around is radically different between versions. Whereas the book established these entities hovering around, films portrayed them flying with little to no support in the same vein with Voldemort and his fellow Death Eater's black smoke Apparition spell minus black smoke effect.

Being a corporeal entities, Dementors can perform physical labors such as bringing food for prisoners in Azkaban and burying their dead bodies. While this apparently exclusive to movie adaptations, a single Dementor can overpower a full-grown man despite rarely engaging in physical confrontations.

The history of Dementors in relation to Wizarding society in Britain is inextricably tied up with one location: Azkaban. The island in the North Sea on which the wizard prison is built has never appeared on any map, Wizard or Muggle. It is implied that Dementors are one of byproducts of Dark magic experiments conducted by Ekrizdis at his fortress on the island. After his death, the various concealment charms placed on the island faded, and the Ministry became aware of the mysterious site's existence.

As mentioned in Pottermore, Dementor infestation was among the horrors discovered during the expedition on the island. Fearing the reprisal of these dark entities should anyone try to evict them, the Ministry decided to let the sizeable colony remain, unmolested and unchecked. Unfortunately, the corruption within the British Minister of Magic saw the ruthless Damocles Rowle repurposed Azkaban into prison island and even worse, weaponizing Dementors as guards for the same facility. As effective as it seemed, many of the prison's inmates had their sanity scarred by the Dementors' presence. Even after Rowle was forced to step down, no improvement over Azkaban was made, let alone the act to remove the entities despite apparent threat they pose. Nevertheless, Rowle's action foreshadowed Dementor's more sinister use upon Death Eaters' takeover on Ministry of Magic where in their case, as weapons of war.

The Dementors are the secondary antagonists and the main plot elements of the third film and the book it's based on. They are sent by the Ministry of Magic to Hogwarts to guard against Sirius Black. Harry encounters a Dementor in the train and during a Quidditch match, undergoing Patronus training in the process. At the end of the year, Harry and Sirius are encountered by every Dementor in the school. Although powerless at first, a stag Patronus (later revealed to be Harry's future self) saves them and repels the Dementors away. After Sirius Black was proved innocent, the Dementors were removed from Hogwarts.

Order of the Phoenix

The Dementors return as minor antagonists in the fifth film and the book it's based on, having sent secretly and illegally by Dolores Umbridge to silence Harry's claims of Voldemort returning. Harry blasts them off with the Patronus Charm.

In the seventh film and book it's based on, Dementors were in free roam, with most having sided with Voldemort and the Death Eaters. They appear shortly when they chase the protagonists as they escape from Umbridge in the Ministry of Magic. Later, in the Battle of Hogwarts, an army of Dementors on Voldemort's side invaded Hogwarts, although they are blasted away by the Patronus Charm.

When Auror Kingsley Shacklebolt became Minister of Magic, Azkaban stopped using Dementors any longer. It is not stated what happened to them, but it can be assumed that, due to a lack of sustenance, they died out and became extinct.

The Dementors as they appear in Harry Potter and the Order of the Phoenix. 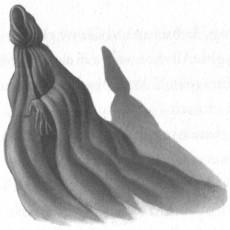 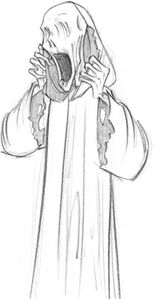 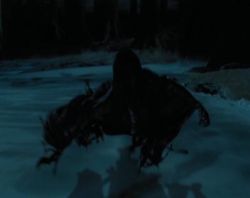 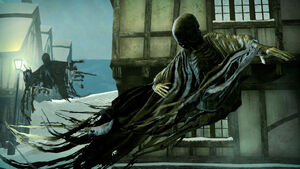 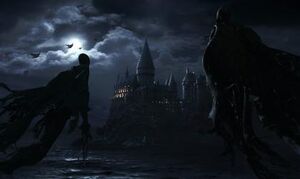 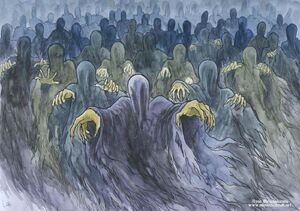 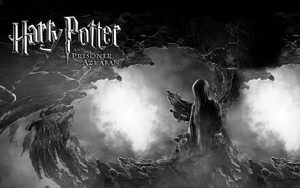 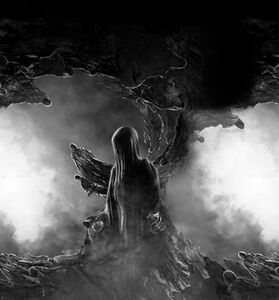