capturing the people and put them in his fishbowl.

Abduction of a goldfish

Demeran Yatmis's head is a white skull head with red gold fish hair, his arms are red goldfish arms wit green hands, his body is a green cracked vase with a Gangler safe on it, his thighs are a red gold fish head with black and white eyes, his legs are green legs and his feet is black rock toe nails, his weapon the Popoinopoi is a green poi staff.

A while later he'd appeared at the park where he used his Popoinopoi to capture the humans and put them in his fishbowl he'd done the same to Umika. After that he battled Patren2gou, before he'd taunted the cop of the people that Demeran captured once that was done he made get away.

He then appeared at the docks looking for more people for him to capture, but turns out the only people are here are the cops. So he battled the cops and during the fight he'd manage to trap one in a fish bowl, but unknown to him Sakuya is going to free everyone from within the bowl and with help from Noel they manage to break the fishbowl freeing everyone that are trapped inside. After that Demeran then battle the Lupinrangers and during the fight Lupin Red gained access to Demeran's safe (which his password is 7-0-8) and got a La pluie violette (which translate as "Purple Rain") Water Gun after that he was taken out by the thieves. 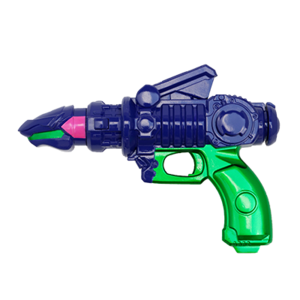