The Mistress' pet and servant

Searching for new worlds for its Mistress to conquer.

Help her rule all other worlds (failed)

Demonic Pet
The Demi-Dog is a hellhound from Extreme Ghostbusters, who is similar in some ways to the Terror Dogs of the original Ghostbusters film. It is a giant, pug-like demon with red eyes who is the loyal pet of the Mistress and its own appearance in the city causes the dogs all around it to turn into monstrous versions of themselves.

Demi-Dog was sent over to New York City by the Mistress to broadcast a controlling frequency, allowing him to possess the city's dog population. Demi-Dog guided the possessed dogs to do its bidding and bring it all the garbage they could find. It then compiled the trash into huge piles around Times Square.

When the Ghostbusters arrived, Demi-Dog was uninterested until they blasted him. Eventually, Egon broadcast Slimer's recorded scream that can render dogs to be submissive, allowing Kylie enough time to set a Trap and capture Demi-Dog.

With Demi-Dog captured, all of the dogs were freed from his control, and the Mistress would soon meet his fate after being captured by Roland with the same trap. 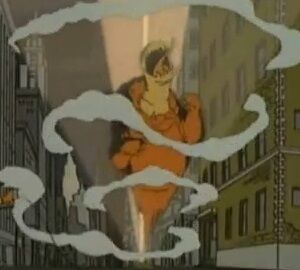 The Demi-Dog becomes sucked into a trap.