The Demo Man is a character in the Red Vs. Blue series. He is first seen in Number One, though he was heard at the end of the previous episode. He appears to be the commander of the soldiers in the Bjørndal Cryogenics Research Facility.

He is voiced by Brandon Farmahini.

The Demo Man was a soldier at the Bjørndal Cryogenics Research Facility, commanding the forces there. Eventually, Freelancers North and South Dakota infiltrated the facility to retrieve a data package. When South is seen by a soldier carrying two coffee mugs, she shoots the latter, but the force of his body hit an alarm, sounding it off. This caused the Demo Man and the other Insurrectionists to realize that intruders were in the facility, and thus they sprang to action. Soon enough, the soldiers and the Demo Man himself were surrounding the two Freelancers, with the latter at the controls of a machine gun turret. He demanded that they return the data module before he and his men killed them both, but before he could open fire, Agent Carolina attacked the men around him after sneaking inside. He turned and attempted to attack her, but was kicked away from the turret by her.

The 3 Freelancers then started fighting against the Insurrectionists, until the Demo Man was able to reach his turret again and fire at the three, injuring North in the process. Carolina stops him by using a grappling hook to rip the turret downwards below the Demo Man's own feet, causing the platform he and other soldiers were standing on to collapse. Fortunately, the Demo Man lands on the edge of a lower platform, escaping the fall that killed the rest of the soldiers. He then somehow managed to escape the explosion and destruction of the facility.

The Demo Man would later be seen again during Son of A Bitch after York accidentally triggers an alarm inside an Insurrection Building. He gathers several dozen other soldiers and corners Tex, Washington, York, and Carolina on the roof, who were about to secure the Sarcophagus. He demands that York disarm a bomb that Tex had been setting up, but York reveals that the object is actually a transmitter.

The Demo Man questions what it is transmitting, in which York reveals that it is transmitting their current location to the Mother of Invention. Tex and Carolina then quickly dispatch the guards, and York hands the transmitter to the Demo Man. While York managed to get some distance from him, the Demo Man then looks up and sees a MAC round barreling towards him from above. He mutters the words "Son of a-" before the MAC round hits the building, which in part destroys a major part of it, causing the whole structure to collapse after a few moments.

Battle at the Longshore Shipyards

The Demo Man is later seen at the Longshore Shipyards in Oversight, revealing he survived the MAC round in Season 9, albeit with having his left arm amputated, and has became a cyborg with a robotic arm. When the Freelancers attack, the Demo Man strikes back by chasing Washington in a Warthog. He then defends Girlie when she is attacked by Carolina, stating his payback towards her when they meet. When the Demo Man and Girlie engage Carolina, Maine intercepts, slices off his robotic arm and blasts him into the water with his Brute Shot, along with Girlie.

Out of all of the high-ranking Insurrectionist, the Demo Man is the most immature and humorous of his comrades. He was often seen angered and not following proper protocol when facing the Freelancers, such as referring to North and South as "assholes" instead of as "intruders" in The Twins. The Demo Man also often made one liners and became even more spiteful after losing his left arm. Due to providing the most humor out of the Insurrection and his combative attitude, he could be considered similar to the Blood Gulch Crew or even Washington.

The Demo Man has been rarely seen in combat but has proven to be a highly skilled warthog driver. He was able to move his warthog in the way of plasma rifle blasts, protecting Girlie, as well as be able to drift accurately enough to protect Girlie and drive into York.

After becoming a cyborg, his use of his robotic arm greatly aids him in battle, as he was able to fire a shotgun with one arm, knock Carolina down with a punch from his robotic arm, as well as catch a round fired from Maine's Brute Shot and send it flying back to him. In addition, the Demo Man has shown incredible perseverance, surviving the assault on the Bjørndal Cryogenics Research Facility, a direct blast from a MAC gun and being blasted into the ocean by Agent Maine. However, the latter two encounters cost him his left arm both times. 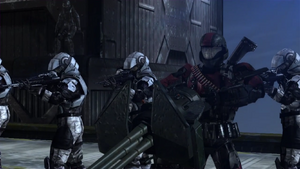 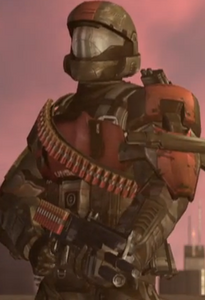 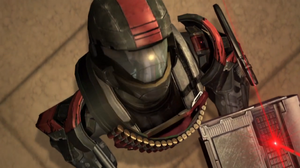 The Demo Man about to die. 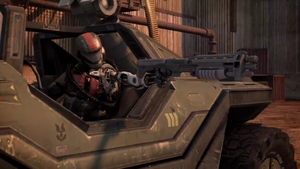 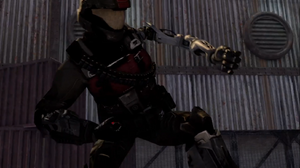 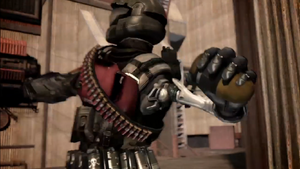 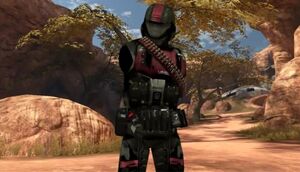 The Demo Man without arms.
Add a photo to this gallery

Retrieved from "https://villains.fandom.com/wiki/Demo_Man?oldid=3535459"
Community content is available under CC-BY-SA unless otherwise noted.