Kill the Party.
Keeping travel within dimensions and to kill organisms.
Kill Martin Brenner (all failed).
Kidnap Will Byers to take him to the Mind Flayer (briefly succeeded).

The Demogorgon is a major antagonist in the Netflix original series Stranger Things.

It serves as one of the two main antagonists (along with Martin Brenner) of Season 1 and a posthumous antagonist in subsequent seasons.

It is a monstrous creature that hails from a parallel dimension reminiscent to a dark reflection of the world known as the Upside Down. It has the ability to create doors to other dimensions, and feed on inhabitants from there. It was sent by the Mind Flayer (who was controlled by Henry Creel) to kidnap Will Byers after a gate was opened in Hawkins Lab, allowing it to cross between the two dimensions.

It was portrayed by Mark Steger.

Nothing is known about the origins of the Demogorgon or its home, but it was discovered by an enhanced child named "Eleven," whose abilities were originally utilized by Dr. Brenner for espionage. During her encounter with the Demogorgon, Eleven touches it, and the creature to use her contact with it to build a "Gate" to the reality she knew, and thus releasing it into her world, where it hunts animals and people. During this time, it takes a child, Will Byers, to his dimension to feed on him, but Will escapes from it and hides from it within the Upside Down. It also took and killed other residents of Hawkins, Indiana, including Barbara Holland (although Vecna is heavily implied to do the actual killing for the latter). As Will's friends and family look for him, Eleven secretly joins the search and helps them get clues about the whereabouts of Will. Meanwhile, Dr. Martin Brenner attempts to issue several cover-ups to prevent knowledge about the Demogorgon's threat.

The Demogorgon is eventually discovered during the course of the search, and while some characters focused on finding the truth behind Brenner's cover-ups, the rest try to find and eradicate the creature. The Demogorgon eventually encounters Nancy Wheeler, the elder sister of Will's friend Michael and the best friend of Barb, and tries to kill and eat her. Nancy escapes from the Upside Down and, along with Will's brother Jonathan, develops theories on the creature's instincts. They later use this knowledge to lure it to them, while they stocked up on dangerous weapons and traps.

Meanwhile, Eleven and her new allies find a way to locate Will's presence in the Upside Down, and trick Brenner into letting them through the Gate to find him. The Demogorgon is engaged and severely injured by Nancy, Steve, and Jonathan, and the former escapes to the Upside Down to avoid destruction. It then returns to the real world, where it encounters and kills dozens of Dr. Brenner's agents, injures him, and attacks Will's friends Michael, Dustin, and Lucas.

However, the Demogorgon is engaged by a weakened Eleven, who was low on energy by this time. Eleven uses her powers throw the beast into a wall, and then unleashes a force of power so strong it causes the creature to be incinerated.

Will Byers, having been in contact with the Demogorgon, has symptoms of coughing up small creatures similar to it, implying that it had offspring through Will. Its crimes had also inspired many changes in the characters, both positive and negative. The same creature came out of the mouth of Barb's corpse and the bodies of all the other victims of the Demogorgon. In the second season, these creatures grew from their adolescent form, which were known as "demodogs".

In season 3, another Demogorgon is revealed to be a captive of the Russian military and is fed human prisoners.

On November 17, 2021, the Demogorgon is set to become unavailable to buy, although previous owners of the Demogorgon will still be able to play as them.

In Smite, the Demogorgon appears as a skin for Bakasura as part of the Stranger Things-themed battle pass.

In the Far Cry 6 and Stranger Things crossover mission "The Vanishing", Demogorgon appears as an antagonist and is referred as "El Devorador" (The Devourer).

The Demogorgon can create and use dimension portals when in contact with any life form foreign to its dimension. It is also physically strong and dangerous, more so than most predators. The Demogorgon appears to possess mild forms of telekinesis, as seen when it opens the door while chasing Will Byers. It is also intimidating in appearance, which can cause adversaries and victims to panic. 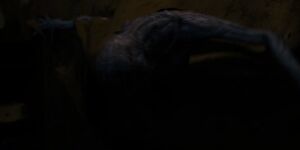 The Demogorgon tearing through a wall in Joyce Byers's house. 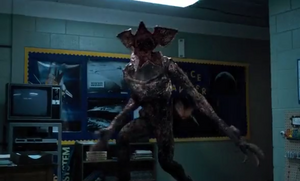 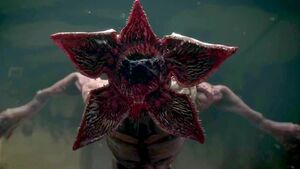 The Demogorgon as it appears in Dead by Daylight. 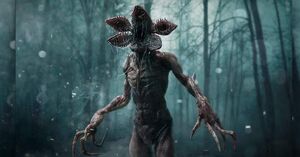 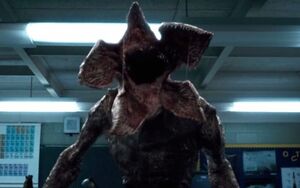 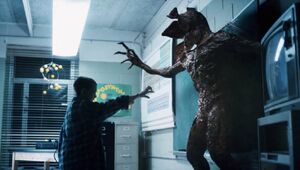 Demogorgon being sent back to the Upside Down by Eleven. 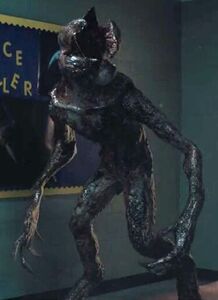 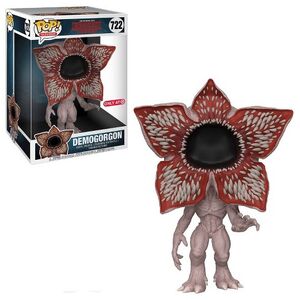 A Funko Pop! of the Demogorgon. 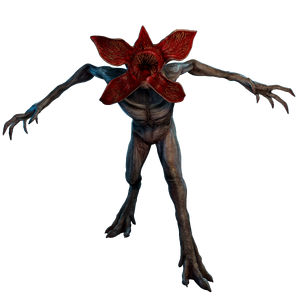 The Demogorgon in Dead by Daylight.