Extreme speed
Ability to transform into a hydraulic excavator

Demolishor is a monstrous, gyroscopic unicycle of death. His personality is described as a bit of a thick-headed coward when the Decepticons do not have a leader, because he is used to being ordered around by Megatron himself. Demolishor is also the guardian of a small Deception community.

When NEST and the Autobots come to Shanghai, and China are attempting to uncover a hidden Decepticon, they find Demolishor and Sideways. Demolishor transforms and swats at NEST helicopters as he begins to make himself mobile. He then proceeds onto a highway, where he goes on a rampage. Ironhide chases him, but with little success, so Optimus Prime is released into the fray.

Demolishor destroys a bridge just as Optimus transforms and jumps off the bridge. Optimus manages to dive onto Demolishor, grabbing onto his head as he proceeds down the highway. Optimus shoots him repeatedly in the head, while Ironhide jumps onto his wheel and destroys it, severely injuring the massive Decepticon and causing him to fall over the edge of the highway and crash onto the ground. As Optimus and Ironhide approach him, the crippled Demolisher declares that "The Fallen shall rise again". Prime disagrees and blasts him through the face, killing him.

Demolishor in Revenge of the Fallen. 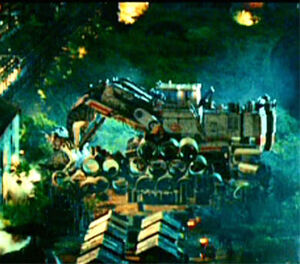 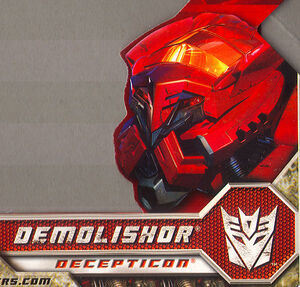 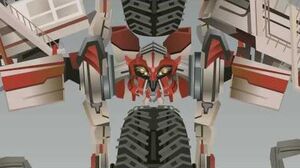