Villains Wiki
Register
Don't have an account?
Sign In
Advertisement
in: Terrorists, Mercenaries, Partners in Crime,
and 12 more

The Demolition Team is a group of antagonists in the fourth season of Arrow. They consist of former GIU, IRA and Mossad members and are experts in precision demolition. They are employed by H.I.V.E..

They are employed by H.I.V.E. to take down three buildings in Star City. Their first task is to kill Captain Quentin Lance, as he was helping the Green Arrow and his team. In order to do so, they fake a call from dispatch and lure him into a house rigged with explosives. claiming that he is needed there on a crime scene. When Lance is inside, they activate the acid, causing the house to break down. Lance is almost killed but saved by Laurel.

Backtracking the call, Felicity finds out that it was made from a building in Star City and expects it to be the main base of H.I.V.E.. However, when they arrive they find the Demolition Team is waiting for them and has set a trap and rigged the building with the explosives too.

While Jackhammer attacks Diggle with a sledgehammer, Rosie shoots Team Arrow with a nailgun. Forced to escape due to the imminent destruction of the building, Rosie shoots three nails into their laptop to destroy the harddrive and both escape. All members of Team Arrow escape the building alive.

Back at the Arrowcave, Felicity tells them that she can hardly find anything on the laptop as there are three nails sticking in the hard drive. Laurel claims that she managed to take a look at the laptop before it was destroyed and that she saw blueprints, leaving the team to the deduction that the Demolition Team plans to take down another building.

When Diggle is told by his brother Andy that the Demolition team uses a special kind of acid to weaken the structures of buildings without leaving a trace, therefore making it look like an accident when the building falls apart, Oliver and Diggle head to the only facility where the acid is manufactured. They find two dead security guard and, after finding out that the Team stole 100 gallons of acid, realize that the building they next try to take down must be massive. With help from Felicity finds out that the building H.I.V.E. wants to take down is the building the mayoral debate is taking place. Realizing that Darhk plans to take down everyone inside the building except his wife Ruvé so that Ruvé can gain sympathies by playing the lone survivor. Oliver tells Felicity to sound the fire alarm to evacuate the building.

When the alarm sounds, Ruvé evacuates with the rest of the civilians but calls the Demolition Team, ordering them to not let Oliver Queen leave the building alive. Inside, Team Arrow finds the acid phials. While Diggle tries to deactivate one, an electrical blast thrusts him back. He informs the team that the phials are boobytrapped when Jackhammer arrives, sarcastically telling him not to touch things that aren't his. Diggle then uses a device to disarm Jackhammer and engages in a fight with him. Meanwhile, Oliver is attacked by another teammember while Laurel and Thea, having just evaded a booby trap, are attacked by Rosie.

The fights end with the victory of Team Arrow, Diggle knocks Jackhammer out with his own hammer while Thea and Laurel team up and knock out Rosie. While fighting Oliver, Oliver's opponent is shot by Captain Lance while fighting Oliver. Lance then arrests the wounded man. 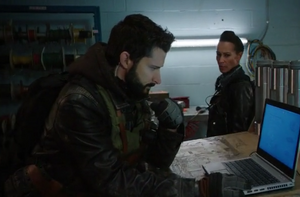 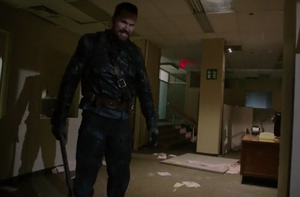