Get eye back from Merasmus (mainly since he was young).

Defending his old job/Regaining his old job back (formerly; later currently).
Do nothing and slack at his mom's home watching ghost court shows with his sword (formerly).

A scrumpy-swilling, monster-bothering demolitions expert from the Scottish highlands, the Demoman (real name; Tavish Finnegan DeGroot) is one of the more versatile members of the team. Though his weapons lack pinpoint long-range accuracy, the Demoman is a powerful, if unpredictable, asset and can hold his own in just about any situation. He is a master of the explosive, excelling at indirect mid-range combat. Armed with his Grenade launcher and Sticky bombs, the Demoman uses his only good eye and knowledge of the surrounding environment for well timed detonations that send enemies skyward, often in several pieces.

The Demoman, as his name implies, excels at swift disassembly, bouncing his grenades round corners to wreak havoc on enemy sentry gun emplacements while remaining safely out of sight. His sticky bombs are a perfect tool for area denial, keeping opponents away from any carts, control points and intelligence cases he deems off-limits. His weapons are some of the most powerful, but also the most situational. He requires more thought and swift decision-making than other classes, especially when lining up his Charges and planting sticky bombs.

Items have been added to the game that allow the Demoman to take the role of a melee specialist, capable of wielding a wider variety of melee weapons compared to every other class in-game, and various shields that reduce damage and allow for a charge attack that can outrun a scout for brief periods. The Demoman claimed he lead a tortured life in Scotland. 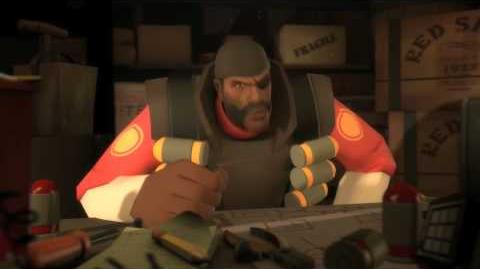 Meet the Demoman
Add a photo to this gallery

Retrieved from "https://villains.fandom.com/wiki/Demoman_(Team_Fortress_2)?oldid=3202920"
Community content is available under CC-BY-SA unless otherwise noted.