Shadow (in the prophecy)

Killing everything in its path.

Destroy all life in the world.

Possessed Predator
The Demon Bear is the main antagonist of Wolf Brother, the first part of Michelle Paver's Chronicles of Ancient Darkness series. It is a nearly unstoppable bear that is possessed by an elemental demon and seeks to destroy everything in its path.

Before the start of Wolf Brother, the demon bear is created by Tenris, a Soul Eater who wants to use it in killing Torak's father (who happens to be Tenris' brother). Presenting himself as a crippled wanderer from the Willow Clan, he is taken in by the Red Deer Clan. He makes a secret place in the woods and manipulates Hord from the Raven Clan to hunt for him a young bear. By using the Fire Opal shard he possesses, he conjures an elemental, the strongest type of demons from the Otherworld. He then traps it inside the bear's body. Unfortunately, the demon bear is too strong for Tenris to control. Breaking free, it kills three people before the Red Deer Clan could chase it away. Tenris flees as well.

Running rampage across the Forest, the demon bear kills every living thing it encounters. It hardly eats any of its victims, and not even flies feed on any of the carcasses the bear leaves behind. Every time it kills somebody or something, its power and size grow. In the first chapter of Wolf Brother, it finds and kills Torak's father. Before dying, the former Wolf Mage makes his son swear an oath to go north and find the Mountain of the World Spirit or die trying. Torak must reach the Mountain in one moon because that will be the time of the Moon of the Red Willow. The red eye of the Great Auroch (the most powerful demon of the Otherworld), a celestial body of great evil, will be at its zenith by then, making the bear invincible. Soon afterwards, Torak finds an orphaned wolf cub which guides him in his quest to find the Mountain of the World Spirit.

After being captured by the Raven Clan, Torak discovers that there is a prophecy about the demon bear: A Shadow attacks the Forest. None can stand against it. Then comes the Listener. He fights with air, and speaks with silence. The Listener gives his heart's blood to the Mountain. And the Shadow is crushed. The Ravens start thinking Torak might be the Listener with the way he defeats Hord in a duel by using steam and calls Wolf soundlessly with the grouse-bone whistle he has made. One interpretation of the prophecy is that to destroy the bear, Torak must be sacrificed, and his blood must be taken to the Mountain. Luckily, Torak and Wolf escape with the help of a Raven girl named Renn who believes that Torak must go to the Mountain himself. She tells him that he must find the three strongest pieces of the Nanuak, a flowing life-force that every living creature has. The World Spirit is angered because Tenris violated an ancient pack by creating a creature that kills needlessly. The Nanuak pieces must be offered to the World Spirit before it agrees to destroy the demon bear.

Unfortunately for the heroes, the demon bear can sense the Nanuak pieces. It hates the bright vibes it can sense radiating from the souls of living creatures. To it, the Nanuak pieces are even more irritating to the point of irresistibility. After Torak and his friends find the first Nanuak piece, the bear starts following them. When Torak ventures deep inside a cave for the second Nanuak piece, the bear corners Renn and Wolf at the cave's entrance. Realizing how alluring the Nanuak parts are to the bear, Wolf takes the first Nanuak part from Renn and runs out of the cave. The bear pursues him relentlessly across the Forest until Wolf manages to shake it off by hiding in a running reindeer herd. The experience teaches the heroes to conceal the vibes of the Nanuak parts from the bear. As they look for the final Nanuak piece, the bear encounters the Raven Clan. It kills Oslak's son and another member of the clan as well as injures Fin-Kedinn in his left thigh, forcing the Raven Leader to walk with a staff for the rest of his life.

After the demon bear is destroyed, its creator Tenris and the other Soul Eaters learn of it. Seeking its destroyer, they learn of Torak's existence and later that he is the son of the Wolf Mage who used to be their member. The rest of the series resolves around Torak confronting the Soul Eaters who used the demon bear to kill his father. He meets and vanquishes Tenris in Spirit Walker, doing the same with the other Soul Eaters in the following books. Wolf has to live in the Mountain of the World Spirit as the price of the demon bear's destruction. However, he defies the Spirit in Spirit Walker and leaves the Mountain to reunite with Torak. 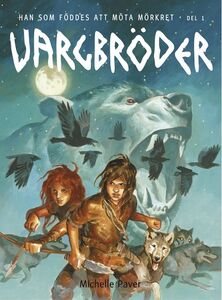 The Demon Bear depicted in the background of the Swedish cover of Wolf Brother. 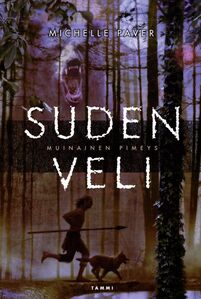 The Demon Bear depicted in the background of the Finnish cover of Wolf Brother. 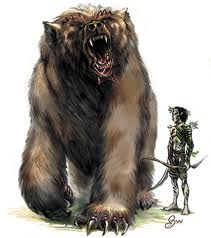 The Demon Bear depicted in COAD Wiki.
Add a photo to this gallery
Retrieved from "https://villains.fandom.com/wiki/Demon_Bear?oldid=3963216"
Community content is available under CC-BY-SA unless otherwise noted.