Demon Beast Troops (in Japanese: 妖獣兵) are dark magic familiars and soldiers created from spiritually possessed animals and humans to serve Emperor Ganishka of the Kushan Empire in Berserk. 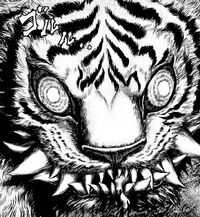 Pishachas (in Sanskrit: पिशाच) are The Demon Beast Troops of Emperor Ganishka's Troops. These various animals (to date: Crocodiles, Elephants, Tigers and Whales) are possessed by Kushan sorcery (infusing a spirit into an animal) and sometimes outfitted with human weapons. The nature of the possession requires a Kushan spellcasters to locally control the minds of possessed animals (in doing so they must be in a state of meditation and are left defenseless to surprise attacks launched by external forces). Emperor Ganishka uses this inhuman force to dominate Wyndham and invade Vritanis.

They can still be affected by the barrier that rejects astral bodies though not entirely since they have an actual body (originally animals) unlike Trolls that came from the astral world who are pure spirits.

When their possessors are killed their minds go back to their animalistic nature making them less dangerous though their monstrous appearance and possibly their enhanced abilities (since crocodiles can still carry their spears) aren't reverted.

Once dead Pishachas don't revert to their original form immediately, as it will take some time.

Makara (in Sanskrit: मकर) are the most powerful (but not the strongest of Demon Beast Troops) Pishacha available to Kushan Demon Beast Army. They fought for the Emperor Ganishka and are controlled by Kushan sorcerers. Makara are originally whales that are influenced with spirits of Kushan war elephants. This causes the whales to manifest elephantine attributes like long trunks and tusks that, with their enormous size and strength, make them very difficult to kill. The Makara were mainly used during the attack on the harbor of Vritannis.

A Makara was first seen assaulting Guts' party at the beaches outside Vritannis as a last resort to kill them after they repelled Crocodile-type Pishacha reconnaissance unit. It too failed.

Later, a Makara would appear to block the same party's escape from the Vandimion mansion, where it would be slain by Guts, who drove his sword through its brain and blasted it apart. Shortly afterward, no less than five Makara appear in response to the elimination of the Daka Horde to block progress to the harbor. Although each are said to possess capability of sinking 10 warships they are no match for Berserker Armor and were collectively slaughtered.

Garuda (in Japanese: गरुड) are type of Pishachas to be under the control of Kushan sorcerer Dhaiva. They are a series of winged creatures resembling pterodactyls. They have a large wingspan and very large heads, easily the same size as the rest of their bodies, with powerful jaws and teeth. They are very ferocious and rapacious to the extent that Dhaiva considers himself the only one safe from attacks by them and no one goes where it is stashed for fear of being eaten by them.

A Garuda is first seen being mounted by Dhaiva to escape after being defeated by Guts. The Garuda alongside its master were electrocuted by Ganishka for Dhaiva's failure, though they survived. The Garuda is once more seen when Daiba flies next to the transformed Ganishka, even though all Dhaiva could do was watch.

Several Garuda were being kept in a stable while Dhaiva was hiding after Falconia Empire was established, and he released them to aid Silat and Rickert to escape Falconia from clutches of Rakshas.

Kundalini (in Sanskrit: कुण्डलिनी) is an extremely powerful astral serpent with control over the element of water. Its powers were so great that Schierke said it could be seen as god by polytheistic cultures. Kundalini was once harnessed by Dhaiva. It is also the most powerful creature of Kushan Demon Beast Troops.

At a first glance, The Kundalini appears to be a monstrous serpent made of water, hundreds of feet in length and somewhere between fifteen and twenty in width, and lacking facial features except for two brightly glowing eyes. However, this is merely its proxy body: the true form of the beast is a sea snake of average size, small enough to coil around a man's body. This smaller snake is also its weak point. The Kundalini is described by Schierke as similar in nature to the kelpie, but on a much larger scale. Its power over water was immense. It could create towering water spouts to wash away its enemies, a power that its master, Dhaiva, utilized before summoning the creature itself.

It also had the ability to pressurize water to a very fine point, allowing it refine the water to create blasts which Daiba described as being able to cut diamond (think of water jet cutter technique). However, this assumes that no other force interferes with the pressurization: Schierke was able to block the water's cutting effect by calling on a spirit of fire, which surrounded her and Guts like a shield. If all elses fail, the Kundalini is not averse to using its body to thrash and slam into its opponents.

The Kundalini was summoned by Dhaiva at Vritannis's harbor to destroy Guts and his companions after the latter proved to be able to combat his abilities with the Berserker Armor and his own prowess. An incredible and vicious battle ensued, during which much property was destroyed and Gut's small band's lives were threatened several times. It was eventually slain through the combined efforts of Schierke, Serpico, and Guts.

The destruction of this beast enraged Ganishka into appearing in his apostle form, where even more chaos followed.

Daka (鬼兵 in Japanese) are the demonic army Emperor Ganishka created using dark magic. Daka are born by corrupting human fetuses using an enslaved mass of chained Apostle (later revealed to be an artificial Behelit) and magic. By sewing a huge mass of apostles together, force-feeding them with amniotic fluids and dropping live, pregnant human women inside of the result, the Daka are born in the Astral realm, within the Apostles, bursting from their mothers' stomachs, killing them in the process. They are fed human meat (their own mothers') and live only to serve their master, Ganishka.

They resemble misshapen humans with horns and large teeth. They fight with weapons called Madu and Fakir's Horns. Although they are no more than cannon fodders to Guts's Party and Apostles, Dakas are more than a match to ordinary humans. When a Daka is slain, its dead body will slowly turn into that of a human. When in need of faster mobility they utilize Tiger Pishachas for transportation.

It is unknown if they can act out on their own since sometimes Kushan magic users are around and if the latter is killed the former wakes up from mind control similar to those of the Pishacha.