Protect his child at all costs.

The Demon Father, also called "The Father", is a nameless monstrous demon who impregnates a teenage girl named Angelique Burcell with his child whom he later comes for, and the main antagonist of the Masters of Horror segment/short film Pro-Life (alternatively known as John Carpenter's Pro-Life).

At the beginning of the story, the creature seizes Angelique by her ankles while she swings on her swingset one night. It drags her under the ground and rapes her, resulting in her impregnation with the demonic child. Determined to prevent the baby's birth (as its supernatural aspects speed up the pregnancy), Angelique goes to an abortion clinic to dispose of the child.

For the most part, the Demon Father is absent from the story as Angelique's gun-toting father Dwayne becomes determined to keep her from getting an abortion. He is particularly motivated when "God" tells him to save the child. After Dwayne and Angelique's brothers kill and injure some of the staff, the Demon Father emerges from the ground after dragging a security guard named Doug to an unseen fate (presumably killing him). The Demon Father, determined to get to its child, kills 2 of the brothers and Dwayne (all while revealing itself to have been the "God" that told Dwayne to save the child).

Angelique gives birth to the demon spawn and kills it with a headshot. The Demon Father sees its child and seemingly grieves over its dead body. Without a fuss, it retreats to Hell as the story ends.

It is uncertain as to whether or not the Demon Father is Satan or an incarnation of the demonic entity. It demonstrates several Satanic qualities such as its ability to manipulate via a "God" imitation voice and ability to rise from the ground, complete with fire and smoke. It also resembles many incarnations of The Devil, particularly with its curved horns and scaly appearance.

Despite its hostile and murderous nature, it seems to have genuinely wanted to become a father and cared for its spawn enough to grieve over its corpse. 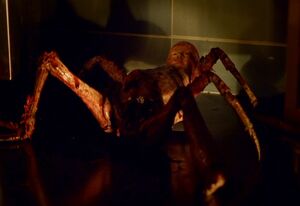 The Demon Baby
Community content is available under CC-BY-SA unless otherwise noted.