Possessing people and enter their bodies

Turning their eyes red for making them do evil things

Possessive Demon
The Demon Frog (also known as Devil Frog in the Japanese version) is a major antagonist and a petite yet powerful monster called a Demon Beast ordered by King Dedede (before Heavy Anaconda) in the Kirby: Right Back at Ya! episode "Frog Wild".

Its vocal sound effects were provided by the late Yūko Mizutani in the Japanese version. Whereas in certain versions, it croaks like a traditional frog.

Kirby is the first character to meet the Demon Frog. When he gets possessed by the Demon Frog, he greatly resembles his normal self, but he has bat wings on his back and his eyes get longer and sunken in. The eyes also begin to glow red.

He is also commonly sneering while possessed too, making evil laughs. Dedede certainly changes much more than Kirby does when he is possessed by the Demon Frog. His muscles grow to epic proportions and his lower body gets leaner. His robe rips due to the dramatic size increase and he now has small bat wing-shaped markings on his chest. Like Kirby, Dedede's eyes begin glowing red when possessed, but unlike Kirby, he also grows small fangs.

The possessed Dedede easily pummeled Kirby like a hammer, but just as he was about to deliver the final blow to Kirby, the battle was soon interrupted by another monster that comes out from hiding called Heavy Anaconda that Dedede ordered from Nightmare Enterprises. The Demon Frog eventually met its demise when it got devoured by the huge brown snake, freeing Dedede from its control in the process.

The Demon Frog is a small, round green frog with a yellow underbelly and small purple bat-like wings. It has large orange eyes, a purple star above its nose, and lavender markings around its eyes. Whenever the frog possesses people, the victim gains glowing red eyes, menacing facial expressions, and sometimes even a change in body type. 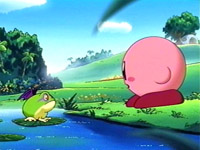 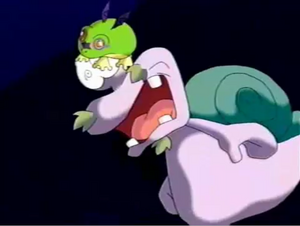 The Demon Frog "assaulting" Escargoon the night he is ordered. 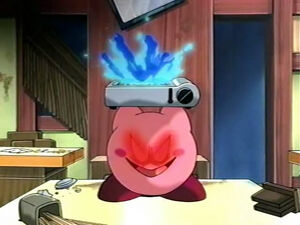 Kirby, as he appears while possessed. 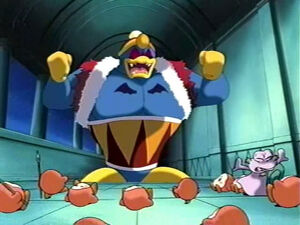 King Dedede, as he appears while possessed. 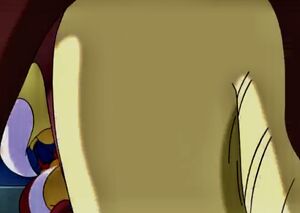 Heavy Anaconda eating the Demon Frog and Dedede.
Add a photo to this gallery

Retrieved from "https://villains.fandom.com/wiki/Demon_Frog?oldid=3825606"
Community content is available under CC-BY-SA unless otherwise noted.