Ruler of the Demon Clan and Purgatory

The Demon King is the main antagonist of the anime and manga series Seven Deadly Sins.

He is the supreme ruler of Purgatory who commands the Demon Clan and the creator of the Ten Commandments. He is also the father of Meliodas and Zeldris. He is indirectly responsible for the events that have occurred throughout the series and the villain of the penultimate arc.

The Demon King is a ruthless, tyrannical demon that has been in constant clash with the Supreme Deity for millions of years, due to their opposing natures. He is extremely devoted to the laws of his clan and despises anyone in his army that attempts to betray him, even his own sons.

Should anyone were to ever oppose him, he would either grant them a punishment that would put them through endless torture or inflict genocide on many civilians. Due to this, he is feared by many, including his son, Zeldris, who follows every command his father gives him, regardless of whether it's something he's not on board with.

Due to his tremendous power and his status as king, the Demon King has a large sense of pride and confidence in himself and looks down upon those that attempt to oppose him. Despite this, he does not hold back against his opponents. Instead, he is always willing to display his full power to its true extent to ensure his victory.

The Demon King was born from an ancient entity known as Chaos shortly following the world's creation as the personification of darkness. Using his power, he created the Demon Realm and the Demons in his image, and even sired two sons, Meliodas and Zeldris.

Due to the chaos and massive size of the Demon Realm at his rule, the Demon King at first considered giving half of his power to his servant, but that choice was out of option as it could threaten his reign. To avoid giving too much power to someone else, he divided that power into ten pieces and gave it to ten of the strongest Demons to form the elite group known as the Ten Commandments.

He fell into a bitter rivalry with his "sister", the Supreme Deity, and had the Demons constantly clash with her creation, the Goddesses and eventually had them wage war against them and the allied clans in the Holy War. However, he has worked with her despite their dislike of each other on two occasions: the first was to seal away their creator, Chaos, to allow them to rule over the world as "gods" and the other was to punish their children, Meliodas and Elizabeth, for their continued defiance to the laws of their clans.

The Demon King, as the ruler of one of the two strongest clans, the Demons, is tied for the second strongest character in the series alongside the Supreme Deity, the ruler of the Goddesses; the only being who outclasses them is their creator, Chaos. His raw power is acknowledged by even Meliodas to be on a godly scale and far beyond Meliodas's own massive power. Even Zeldris armed by a portion of the King's own magic power acknowledges his power still pales compared to the full power of the Demon King and even Meliodas armed by that power cannot reach the Demon King's level. Meliodas also notes it is impossible to achieve a level of power even close to his father's even with training alongside Zeldris and Estarossa and the only way to gain power equal to the King is if Meliodas is to absorb all the Commandments. The Demon King's power is also shown by how from having inherited a mere portion of his powers, Meliodas and Zeldris became the strongest of the Ten Commandments.

In battle, the Demon King is easily one of the mightiest fighters in the series, rivaled only by the Supreme Deity, wielding not only millenia worth of combat experience and therefore unparalled combat prowess but also godly offensive and defensive powers to back said skill up. His might is shown by how during the Holy War, he single-handedly crushed the rebellion of the Vampires without sustaining even a scratch and did the same effortlessly to Meliodas, with his elder son even openly acknowledging he was utterly powerless before his father. He utterly defeated Wild countless times and decisively defeated Meliodas, Wild and Ban over 6,000 times. Even after they manage to turn his power against him, defeating him proved too much and only with Wild's full-powered sacrifice was it enough to stall the Demon King just enough for Meliodas and Ban to escape.

One of his most prominently terrifying combat traits is his incredolous Magic Power The Ruler, which focuses on magic inversion and allows him to completely invert any and all forms of magical attack no matter the nature to healing and strengthening. Even if one were to be able to use magical healing on him to weaken him, the King can simply change his magic power to be able to instead absorb and amplify the strength to make full recovery. The Demon King also wields other considerably formidable powers, such as summoning bolts of lightning and surges of hellfire with a simple hand movement as well as blasting powerful kinetic blast (the latter of which overloaded Wild enough to kill him.)

Being the colossal being as he is, his physical prowess is easily the greatest. He is easily strong enough to nearly crush Wild within his finger, effortlessly flick him aside with a single finger and his resilience can effortlessly withstand Wild's attacks without any scratch, only being minorly wounded when Wild super-charged himself and even that proved to be of no hinderance. Despite his size, he is tremendously fast as well and his skills in swordsmanship allows him to deliver strikes of phenomenally great speed and strength, able to cut cleanly through mountains and easily entirely pressure Meliodas and Ban, despite their far smaller size and great agility, even managing to cut off Ban's arm. With his sword skills alone, he easily repelled Meliodas's attacks and quickly defeated him.

The Demon King also wields unprecedented skill in curses and blessings, capable of crafting spells of immense durability and potency, such as the Immortality Curse he inflicted on Meliodas, which will allow him to revive no matter how many times or the method by which he dies. He even modified it to hold a fail-safe so as to be able to feed on Meliodas's emotions. The curse is strong enough that only someone as comparably powerful as the King has the ability to remove it. He also managed to convert half of his power into 10 unique extremely powerful curses that he bestowed into the Ten Commandments, which is able to affect anyone except the King or the Deity as well as anyone blessed with immunity to the powers of the Demon Clan. As the Commandments are able to turn other species into Demons, the Demon King likely can also turn others into Demons himself. He is also able to bless others with immunity to the brainwashing powers of the Goddess Clan and knowledge of all the Demon Clan's secret techniques, doing so to Merlin, and grant others with a portion of his magic power, as he did with Zeldris. The Demon King can telepathically communicate with his son even when sealed and he is able to somehow mark creatures to be able to see through their eyes. 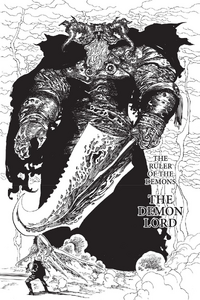 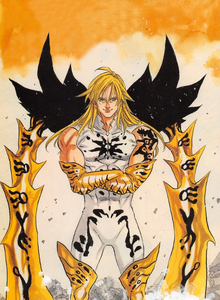 The Demon King in possession of Meliodas's body. 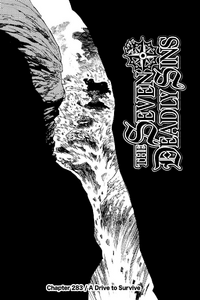 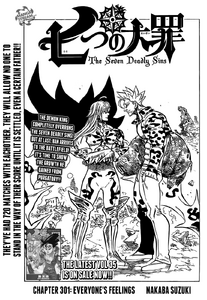 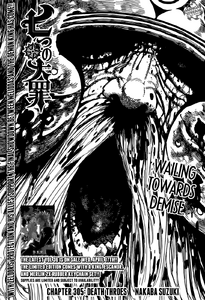 Chapter 305 cover.
Add a photo to this gallery

Retrieved from "https://villains.fandom.com/wiki/Demon_King_(Seven_Deadly_Sins)?oldid=4160638"
Community content is available under CC-BY-SA unless otherwise noted.