Member of the Vader Clan

Leader of the Vader Clan (temporarily)

Take over the Vader Clan.

Thrill-Seeking Brute
Demon King Banriki is a musclebound space wanderer who later joins the Vader Clan and a major antagonist in Denshi Sentai Denziman, later becoming the final villain of the show.

He would later stage a coup to seize control of the Vader Clan and become the main antagonist in the final episodes.

He is portrayed by Kin Oomae.

Banriki was originally a hired mercenary who wandered through space fighting on several battlefronts before coming to Earth. During this time he built up a reputation as a mighty warrior who caused destruction wherever he went that was known to both Denzi Dog IC and the Vader Clan.

Upon coming to Earth, Banriki offered his services to Queen Hedrian but the Queen rejected him, being wary of his reputation. To demonstrate his power to the Vader Clan, Banriki attacked all the Denziman, injuring each of them until DenziRed was the only one left to fight. After the Denziman used the DenziStick Boomerang to wound him, he grew giant. Denziman attempted to finish him off with the Electronic Full Moon Cut, but Banriki grabbed the blade before it could strike him and struggled to hold it in place, before retreating.

From then on, Banriki spent most of his time lounging around in the Vader Castle doing little to help the Clan in their conquest and giving snarky remarks to the other members. He later made a deal with the Vader Monster Sakkalar and numerous Dustlers to help him take over Vader Clan, promising to let them party in exchange for helping him in his coup. Banriki and Sakkalar took advantage of Sakkalar's poison gas, which was intended by Queen Hedrian to be used against the Denziman, and used it to ambush the Vader Clan leadership, causing them all to fall asleep while Banriki and his followers donned gas masks. Banriki then took over the Vader Clan and allowed the Dustlers to throw a party while he sat back and drank. However, his reign was cut short when Sakkalar was defeated by the Vader Monsters Karakurilar and Kendamalar and Banriki himself was captured by Queen Hedrian. He was then turned into a human candle by Queen Hedrian for his treachery but, right before being submerged in candle liquid, Banriki proclaimed he had not lost yet.

Unbeknownst to the Vader Clan, Banriki had one final trump card in a special egg he had placed inside the Vader Clan's machine for hatching Vader Monsters. The egg soon hatched into Banriki Monster and went and freed Banriki, before using its power to overpower the other Vader Clan executives and enable Banriki to become leader once again.

Banriki would prove to be a very ineffectual ruler, doing little other than drink and send Dustlers out on uncoordinated attacks. The change in the Vader Clan's style of attacking soon led the Denziman to conclude that Banriki had taken power. His reign soon came to an end, however, when Queen Hedrian and Mirror discovered Banriki Monster's weak spot, that being its tail, and inform the Denziman of it, allowing them to destroy it. Enraged, Banriki goes to kill Hedrian, but Mirror blinds her with an attack. Crippled, Banriki is teleported outside the Vader Castle, where he is easily killed off by the Denziman using Denzi Boomerang. 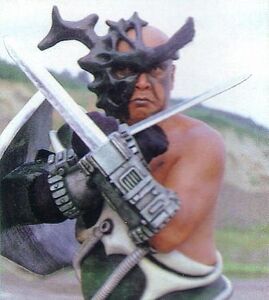