King of the Jackals

Destruction ray
Control over an army

Take over the universe (failed).

Demon King Jackal is the main antagonist of the 1975 manga The Ultraman and the 2015 original net animation The Ultraman: Jackal vs. Ultraman, released as the 30th episode of the Japan Animation Expo. He is the leader of the Jackals with plans to take over the universe.

In the ONA, he was voiced by Kōichi Yamadera.

King Jackal was the leader of the Jackals, a race of mongering aliens who once held the universe in his hands. That was until Jackal was brought to his knees by Ultraman King and banished into Hell's Black Hole to pay for his crimes against the Galactic Republic. However, in 1975, Jackal found his way out of his black hole imprisonment, and immediately began his quest for vengeance.

First killing Ultraman in the form of Zetton, Jackal kills off the Ultra Brothers one by one until nobody is left to oppose his rule. Hunting down the remaining Ultra Warriors, Jackal and his men invade the Earth to enslave humanity. He has his minions scout out Ultras, killing many innocent people to drive Zoffy, the leader of Ultra Brothers, out of hiding. Just when it seemed all hope was lost, an alien figure arrives and addresses himself as Melos, the captain of the Andromeda Nebula Branch of the Space Garrison. With the help of Melos, the Ultras defeated the Jackals on Earth before heading straight to the Jackal homeworld.

During the all-out war between the Ultras and Jackals, Melos finally encountered King Jackal and engaged in a duel. Despite Jackal's ability to shapeshift into Alien Nackle, Black King, and Ace Killer, Melos gains the upper hand and uses his Andro Rang to cut off Jackal's left horn. Jackal feigns defeat and beckons for mercy. Melos agrees to spare the tyrant king's life, but with his back turned, Jackal breaks Melos' left arm, deactivates his armor, and unleashes a powerful beam at Melos to finish him off.

Believing Melos to be dead, Jackal boasts how the entire universe was now his to control, only to see Melos emerge from the rubble. Enraged, Jackal launches another beam at Melos, only for Melos to counter his beam with the M87 Beam, wounding Jackal and killing many of his men. Melos' armor comes off to reveal Zoffy, who thanks to Melos' intervention, revived the Ultra Brothers. Jackal scoffs this and charges up another beam, claiming that he will send them back to Hell where they belong, only for the Ultra Brothers to combine their beams to obliterate Jackal in a massive explosion. With their king dead, the Jackals surrender, restoring peace to the Galactic Republic.

Jackal has a reptilian appearance with red eyes and hair, gray skin, and a yellow-green armor vest. He has a red symbol on his forehead, which shines brightly when he fires his destruction ray. When charging his beam, his hair turns yellow and he glows a golden light.

Jackal is a cold and heartless emperor with the sole objective to dominate the entire universe. He only sees his victory, showing no sympathy for those he oppresses. Shapeshifting into those who he sees fit, he will do any means to win, no matter how cruel he should be to his opponent. Should he be on the verge of losing, he feigns defeat to make his enemy lose their guard before counter-attacking. 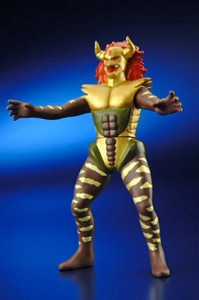 Jackal realizing he may not win against Melos.

Jackal waits for Melos to walk off after "begging for mercy".

Jackal preparing to fire at Melos.

Jackal believes that he has won...

...until he sees Melos standing behind him.

Jackal surrounded by the Ultra Brothers.

Jackal attempts to use his beam to kill the Ultra Brothers once more.

Jackal can only scream in pain as he's consumed by the Ultra Brother's beam.

Jackal prior to exploding. 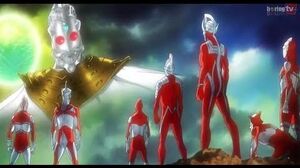 The Ultraman VS Jackal !!