Conquer Earth.
Take over the universe.

Demon King Psycho is the ruler of the Madou crime syndicate and the main antagonist of Space Sheriff Sharivan.

He is a demonic idol-like being with powerful illusion conjuring abilities who seeks the domination of the entire universe. He takes the form of a statue seated on a throne and possesses powerful psionic powers thanks to an artificial brain implanted inside him. He also has a mobile extension called Psychorror, who takes the form of a bald man in a tan suit named "Umibozu" and often appears in areas where Madou activity is secretly occurring.

He later returns as the main antagonist of the movie Kamen Rider x Super Sentai x Space Sheriff: Super Hero Taisen Z, where he is revived by the efforts of Space Reider and Shadow Moon.

He is voiced in all of his appearances by Shozo Iizuka, who also voiced later Metal Heroes villains Great Emperor Kubilai and Org Ninja Dokusai. His Umibozu form is portrayed by Kazuyoshi Yamada, who also did suit work for the series.

2000 years ago, Psycho and his Madou forces were responsible for destroying Planet Iga, from which the future Space Sheriff Sharivan, Den Iga, and his family originated from. The survivors settled on an island on Earth and brought with them the Iga Crystal, which was said to hold untold power.

Seeking to conquer the universe, Demon King Psycho targeted the Earth following the Space Crime Organization Makuu's failed invasion of the planet and used his illusion-casting abilities to herald his arrival by spreading chaos across the planet. He initially left most of the operations up to his high commander Doctor Polter but eventually began to intervene more after growing tired of his subordinates' failures.

When Reider arrived seeking to the join the Madou, Psycho agreed to give him Polter's position after being impressed by the underworld sorcerer's illusory abilities and how effective they were against Sharivan. After Sharivan was able to overcome them however, Psycho gave Polter back her position and suspended Reider from going out into battle. Eventually though, the Demon King lifted Reider's suspension after he used his mysticism to ward Sharivan away from Madou's secret Earth base.

Later, Psycho announced that whoever would bring him the Iga Crystal would be his successor. Doctor Polter, General Gyrer and Reider all competed to bring the crystal back to Psycho first. After Gyrer died fighting Sharivan, Reider obtained the crystal thanks to the abilities of Gamagon and was anointed by Psycho his successor. However, Psycho sensed that Reider had ambitions of overthrowing him and ordered him to fight Sharivan to get him out of the way. He sent Miss Demon 2 to spy on Reider as well, but Reider had Gamagon devour her. While Gamagon fought Sharivan, Reider stormed Genmu Castle and seemingly slew Psycho on his throne before announcing himself ruler of Madou.

However, it was at that point that a mysterious bald man arrived in Genmu Castle. The bald man revived Psycho and unveiled himself fully mobile cyborg Psychorror, an extension of the Demon King himself. Demon King Psycho then announced that he was immortal before killing Reider through Psychorror. However, thanks to Reider's actions, Space Sheriffs Gavan and Sharivan were able to find a path to Psycho's fortress. Psycho sent Psychorror out to deal with Sharivan and Gavan and ordered that the two be brought into the Genmu World in order to enhance Psychorror's power.

The two were unable to destroy Psychorror, as it was immortal so long as its other half existed, but they were still able to enter Psycho's fortress. After defeating Doctor Polter and Miss Demon 1, the two Space Sheriffs face off against the Demon King, who quickly overwhelms them with his tremendous power. Realizing that both bodies must be destroyed to fully defeat Psycho, the two Space Sheriffs combine their powers to perform a duel attack. Sharivan destroys the immobile Psycho while Gavan simultaneously destroys Psychorror, finally vanquishing the Demon King and putting an end to the Madou.

At some point, Psycho was able to revive Strategist Reider, who set in motion a plan to revive Psycho at full power, assembling Space Shocker from revived past foes of the Kamen Riders to serve as a front for Madou's return and to capture Psycholon, who housed a fragment of Psycho's soul that could be used to absorb magic and bring back Psycho.

Eventually, after the Galactic Union Police fire the Super Dimensional Cannon at Earth in order to destroy Space Shocker, Reider uses his magic to hijack the energy of the beam to complete the Demon King's resurrection. The resultant explosion provides enough power for it, before Reider perishes, just to later return as Space Reider, bringing several other monsters to the fight.

Psycholon is also overcome by the energy surge and is put under Madou's control as well, fusing back into Demon King Psycho. Psycho and his army of revived monsters then attack the Kamen Riders, Super Sentai and Space Sheriffs and start to overwhelm them, but an army of Kamen Riders and Super Sentai led by Kamen Rider 1 and Akaranger arrives to reinforce their fellow superheroes against Madou. As Psycho wreaks havoc, Yoko calls out for Psycholon and it manages to break free from Psycho's control, Psycho fires an attack at her, only for Psycholon to block the attack, sacrificing itself to protect Yoko. After being weakened by Space Sheriffs Gavan Type G, Sharivan and Shaider, Demon King Psycho is ultimately defeated when the Kyorugers' Kyoryuzin and Kamen Rider Wizard's WizarDragon combine and use their united powers to destroy the Demon King. 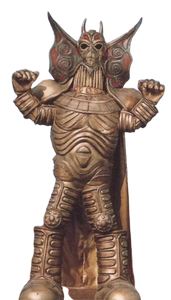 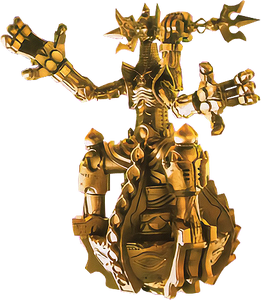 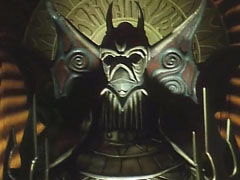 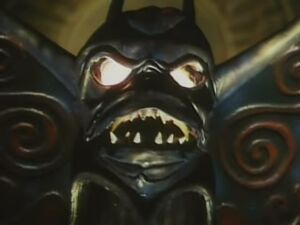 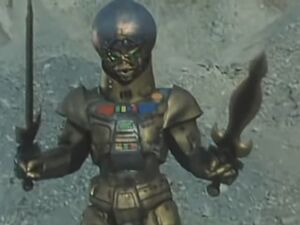 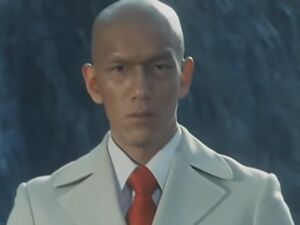 Umibozu, a mysterious bald man who appears wherever there is Madou activity.