Leader of the alien demons

Planning his conquest of the Earth.

Turning people into zombies.
Manipulating others into opening the Gates.

The Demon Overlord is one of the two main antagonists (alongside Dr. Malcolm Betruger) of the 2019 direct-to-DVD science-fiction horror film Doom: Annihilation, the second film adaptation based on the video game series Doom. He is the leader of the demonic creatures from another dimension, seeking to reclaim the Earth and annihilate all life-forms on it.

He was voiced by Boyan Anev, who went uncredited in the movie.

The demons were a race of monstrous entities that attacked the Earth millions of years ago. Having preyed upon the human race for thousands of years, the demons were mysteriously warped to another dimension known as Hell. After sending eons rotting in Hell, the Demon Overlord plotted his revenge to return to the Earth and destroy humanity.

In the present day, the United Aerospace Corporation discovers two ancient teleports they call "Gates"; one on Earth and another on the Martian moon Phobos. After establishing a base on Phobos to boot up the Gate, the UAC scientists led by Dr. Betruger send a test subject as the first person to use the Gate. The Gates are instead portals to Hell, where the Demon Overlord corrupts the test subject, sending him back partially deformed and mentally insane. Despite warnings from his co-scientists, Dr. Betruger enters the Gates himself, where the Demon Overlord manipulates him that the demons seek to enlighten and evolve humanity. Just then, the base goes offline and the demons emerge from the Gate.

Once the hired Marines arrive at the base on a transport vessel, they discover the UAC scientists have been transformed into zombie-like monsters, immediately attacking the Marines. Dr. Betruger asks the Marines to bring the base back online so he could close the Gate and stop the monsters from emerging from it. One by one, the surviving scientists and Marines are killed off by the demons, leaving only Lt. Joan Dark and Dr. Betruger alive by the time they manage to restart the base power. Once they reach the room with the Gate, Joan discovers that Betruger has changed and shoots at him, but he quickly resurrects and pushes Joan through the Gate.

Trapped inside Hell, Joan is immediately surrounded by the demons and the Demon Overlord. After "welcoming" Joan to Hell by using psychic powers to throw her on the ground, the Demon Overlord tells her how pathetic he finds humans and reveals his plan to unleash his demons through the Gate on Earth so he can reclaim the planet and annihilate humanity. Joan uses her BFG 9000 to seemingly destroy the Overlord and his demon armada, using grenades to kill any stragglers before jumping through the Gate once it reopens. Arriving at the UAC base in Nevada, Joan is restrained by scientists when she tries to order them to shut off the Gate. Before losing consciousness, the Gate reactivates and a demonic growl is heard, implying that the Demon Overlord succeeded in invading Earth. 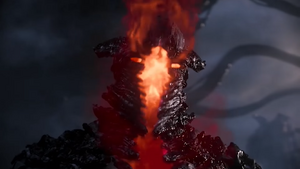 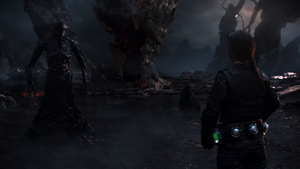 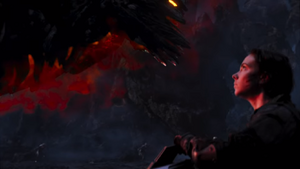 The Demon Overlord and Joan. 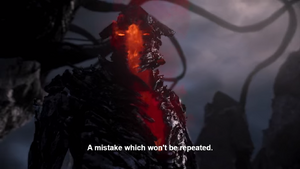 The Demon Overlord monologuing his plan to destroy humanity.