Varies since all Demon Pillars has their own personality

Demonic Deities
The Demon Pillars, whose full name is Demon God Pillars, are manisfection of Demon Gods of Solomon and serves as the Evils of Humanity, most notably Goetia (who disguised as King Solomon). They are the supporting antagonists of the entire Part 1, Fate/Grand Order: Observer on Timeless Temple.

After Goetia's defeat, the surviving four members serves as the overall main antagonists of Fate/Grand Order: Epic of Remnant, but on different degrees.

All of the Demon God Pillars are voiced by Tomokazu Sugita, who also voiced the fake King Solomon/Grand Caster, Lev Lainur Flauros and Goetia in the same game. Outside Fate/Grand Order, Tomokazu Sugita also voiced Renkotsu in Inuyasha, Aureolus Izzard in A Certain Magical Index, and Charlotte Katakuri in One Piece.

The 72 Demon Gods of Solomon are King Solomon's familiars. There is an art for employing daemons among the knowledge that King Solomon left behind, but said manuscript would later be named Lemegeton or Goetia.

In Fate/Grand Order, they are referred to as Demon God Pillars for their appearance, with the term for "pillar" being a literal interpretation of the collective noun used in Japanese for the 72 Demons of the Goetia (ソロモン王の72柱の魔神, lit. "the 72 pillars of King Solomon's Demon Gods").

The 72 demons of the Ars Goetia, bound by King Solomon, and a recurring threat throughout the Grand Orders. While they are powerful demons who are each said to surpass Heroic Spirits in power, their true purpose is to act as literal and figurative pillars to support Solomon's Noble Phantasm, which can destroy humanity.

Five named demons appeared throughout the main story: Flauros (in Septem), Forneus (in Okeanos), Barbatos (in London), Halphas (in America), and Amon (in Camelot, turned into "Amon-Ra" through Ozymandias' magecraft). All of them appear in Salomon, the Final Order, as raid bosses, along with three new pillars: Naberius, Sabnock, and Andromalius. Each of them commands eight other demons, who are named but do not appear in gameplay, accounting for the entire total of 72 demons.

Four more named demons appear in Epic of Remnant being hunted down by Chaldea: Baal (in Shinjuku), Zepar (in SE.RA.PH.) Phenex (in Agartha), and Raum (in Salem). Other Demon Pillars that appeared in Interludes and events include Haagenti (in Medea Lily's second Interlude), Glasya-Labolas (as Nursery Rhyme's "mascot" in the Prisma Illya event), and Andras (in the GUDAGUDA Meiji Ishin event).

Following Solomon's death and Goetia assuming his identity, a curse was implanted into the Magic Crests of select magus bloodlines which would transform the carriers of the crest into Demon Gods after a set amount of time, erasing their original personality. To ensure that the bloodlines would survive to the designated time, the story of the Coronal Rank (Grand Order) Designation was spread as a way of preventing suicide. With his servants appearing at certain intervals over 3,000 years, creating singularities and harvesting energy, Goetia gathered the energy required for Ars Almadel Salomonis and his plan.

In the final singularity, Salomon: Grand Time Temple, all of the 72 Demon Pillars were manifested. Each of the bases within the singularity; the Blast Furnace, the Intelligence Room, the Observatory, the Control Tower, the Arsenal, the Spy Satellite, the Health Office and the Disposal Chute, were administrated by nine pillars unified under a representative, with Goetia on the throne acting as the Control Center.

Though each of the Demon Pillars regenerated upon defeat, the Servants from the previous singularities all manifested and fought them. Their efforts created an opportunity for the Protagonist, Ritsuka Fujimaru, to reach the throne.

After the true Solomon's sacrifice through Ars Nova, returning the gifts he had received from God to the heavens and removing Goetia's immortality, the majority of pillars fell into disarray and eventually ceased activity as Goetia collapsed. However, it is later revealed in Epic of Remnant that Baal, Phenex, Zepar and Raum survived Goetia's destruction, and the Chaledean crew set out to dispose of them all.

Barbatos appears as a major antagonist in the overall Observer on Timeless Temple. It is incarnated through Makiri Zouken in London, and later appears in the "Salomon: Grand Time Temple" singularity as the representative of the pillars that administrate the Control Tower. When Dr. Roman/Solomon activated Ars Nova and removed Goetia's immortality, Goetia's defeat and Solomon's sacrifice sent the pillars into disarray. Soon, Barbatos and most of the other Demon God Pillars ceased its activity.

Demon Pillars in Epic of Remnants

Baal first appears as a major antagonist in Salomon: The Grand Time Temple. Shortly after the initial battle with Flauros, Baal reports that the Eastern terminal nerve was destroyed by enemy Servants. Baal later requested Goetia, who was under the disguise of Solomon at the time, to activate his third Noble Phantasm "Ars Almadel Salomonis" against Chaldea and the Heroic Spirits. However, Goetia/Solomon denied Baal's request because he believes the Demon Pillars are immortal. In the end, Goetia/Solomon finally convinced Baal to drive away the Heroic Spirits.

Later, Baal returns as the secondary antagonist in the first chapter, Shinjuku Phantom Spirit Incident: Malignant Quarantined Demonic Realm. Following Goetia's destruction, Baal sought revenge against Ritsuka and their friends, but what it couldn't accept the most was that the one who brought down Goetia was an ordinary person rather than a famous hero or similar figure. Baal allies with the Archer of Shinjuku (who regained his memory as James Moriarty) against Ritsuka, Artoria Alter and EMIYA Alter. Baal also gained a spectral form and helped Moriarty in the chapter's final boss battle as his supporter, but was defeated in the end.

Phenex appears as one of the two main antagonists in Agartha: Mythical Subterranean Society (alongside Rider of Resistance) as well as its final antagonist. After escaping, Phenex made contact with Scheherazade/Caster of the Nightless City who feared of her repeatedly experience of death. The two cooperated in engineering the Agartha singularity in 2000 AD and tried to bring Agartha onto the sky, before throwing it towards highly-populated cities to cause mayhem. However, by the end of the chapter, it was revealed that Phenex has its own agenda and was using Scheherzade as its pawn. It betrayed Scheherazade and set in motions for itself. Like Baal, it was eventually destroyed by Ritsuka.

Phenex is the only survived Demon Pilliar who serves as the sole final boss in its corresponding chapter. It was fought three times in its main boss fight.

Zepar appears as the secondary antagonist in SE.RA.PH. - Deep-Sea Cyber-Nirvana, Epic of Remnant: Extra. Having lost its body with the collapse of the temple, Zepar hid in the Seraphix facility, choosing Kiara Sessyoin as its host while it sought to recover. However, Zepar's manipulations eventually led to Kiara becoming Beast III/R and it fell under her thrall before being eliminated, making him the weakest of all four surviving Demon Pillars.

During the final stages of the Human Order Incineration Incident, Raum was one of the pillars that administrated the Arsenal. After the demise of Goetia, Raum survives and returns as the main antagonist of Salem: Taboo Epiphany Garden and its penultimate boss, being the most manipulative and the most dangerous survivor amongst all four of the escaped Demon God Pillars.

Following the collapse of the Demon God system referred to as the Human Order Incineration Ritual, Raum initiating its own plan to call in an extraneous existence to fulfil its goals. Raum called its new plan as the Heretical Genesis Ritual.

Raum held disdain for some of the other Demon Pillars, including the other survivors. It believed they were too fearful or conscious of death. It held considerably different point of view from them. It intended to maintain its obligations to the Human Order Correction Protocol and bring "salvation" to humanity. To achieve his goal, Raum decided to use pain as his tool, since it considered pain makes humans humane, administered equally to all.

Having lost faith in "truths" and determined that existences within the Common Sense of the World, including itself, Raum couldn't carry out its full plans. It eventually decided to call upon Foreigners, with the power of Outer Gods, in order to do so. It turned out to become something with considerable repercussions. Its fellow pillar Zepar disapproved Raum's acts of involving Outer Gods, regarding it as a foolish error.

Unlike other Demon Pillars, Raum doesn't consider taking a human form as a burden or restriction, and actually takes comfort in it. Raum also has a strong dislike and fear of cats.

In order to call in an extraneous existence capable of fulfilling his goals, Raum created a Singularity in present-day Salem, Massachusetts. Within it, Raum recreated the events of the Salem Witch Trails in a repeating loop order to draw out Abigail Williams's potential to connect to Sut-Typhon. Raum also possessed Randolph Carter's body while his spirit was travelling elsewhere and played the role of Abigail's maternal uncle who took care of her after the death of his younger sister and brother-in-law.

After being defeated, Raum was eventually killed by Robin Hood before the Protagonist defeated Abigail, saving her from Sut-Typhon/Yog-Sothoth's control and announcing the final destruction to all Demon Pillars and their destructive plans. 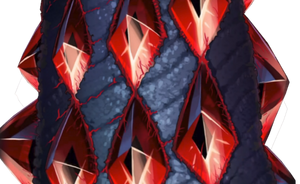 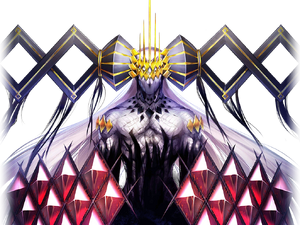 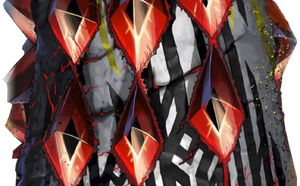 Phenex as a Demon God Pillar 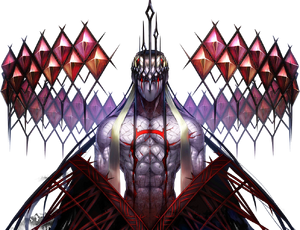 Baal as a demon 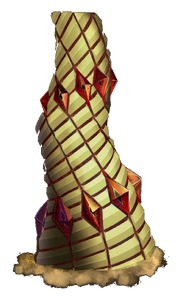 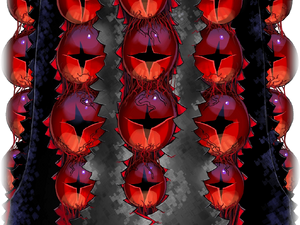 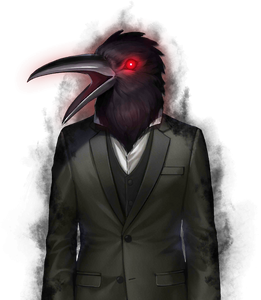 Raum taking over the body of Randolph Carter 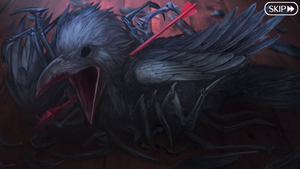 Raum's death at the hands of Robin Hood, announcing the complete destruction of all Demon God Pillars 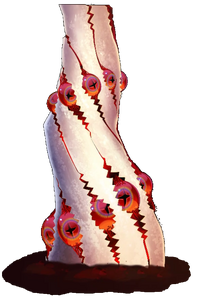 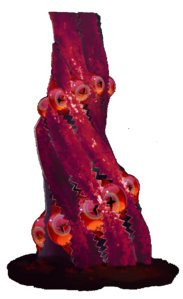