Villains Wiki
Register
Don't have an account?
Sign In
Advertisement
in: Mature, Demon, Evil from the Past,
and 14 more
English

Prince of the demons

Keep the Chaos Flame burning to continue his race (failed).

The Demon Prince is a major antagonist and the first boss in Dark Souls III: The Ringed City.

Long after the Chosen Undead slew the Bed of Chaos to apprehend the Chaos Flame to the First Flame, a champion demon would be born as a prince to rekindle the Chaos Flame to keep the demon race thriving. Known for his destructive ways, when the demons invaded the kingdom of Lothric, Prince Lorian defeated the Demon Prince and stained his sword with fiery blood of the demon at the cost of crippling his legs. After his defeat, the Demon Prince fled beneath the Earth and forgot of the flames that existed within him, thus putting an end to the demon race.

As the world began to fall apart from the fading of the First Flame, the Demon Prince split his essence into the two giant Batwing Demons, the Demon in Pain and the Demon from Below. As long as the two demons remember the power and determination of their incarnation, they will be reborn as the new Demon Prince to revive the Chaos Flame.

In "The Ringed City", the Ashen One first finds themself within the Dreg Heap, a ruined city comprised of civilizations converging into a single location. In the center of the Dreg Heap is a large underground area comprised of the Firelink Shrine from the first Dark Souls. Upon landing in the area, the demons awake from their slumber to engage the player.

While the Demon of Pain and the Demon from Below share the same attacks, they have two states that they go through: extinguished and ignited. When extinguished, they tend to stay in the back using slow-moving breath attacks that build up toxicity, only attacking when the player gets too close. When ignited, they become more aggressive and actively pursue the player to attack them with fast swipes from their claws or powerful fire magic. The best strategy is to separate the two demons from each other, keeping the extinguished one far away while dealing with the ignited one. If both demons are ignited, it is best to run from them until they extinguish. Inflicting enough damage on one demon staggers it long enough to use a visceral attack to their head.

Once both demons go down, the second one revives itself by becoming the next Demon Prince. Depending on which demon was killed last, the Demon Prince uses a different ability. If the Demon of Pain becomes the Demon Prince, he will cast the Floating Chaos spell to summon large meteors onto the arena. If the Demon from Below was killed last, he will cast the Seething Chaos spell to fire a large laser beam from his mouth, although it can be avoided by staying close to him. Outside of his fire spells, the Demon Prince is far more aggressive than the two demons as he will always chase after the player without extinguishing his body, dealing powerful blows using combos from his claws or by grabbing the player and slamming them against the ground. Just like the first phase, hitting the Demon Prince enough times staggers him for a visceral attack.

Once the Demon Prince goes down, using a banner summons gargoyles to grab the player and take them to the Ringed City. 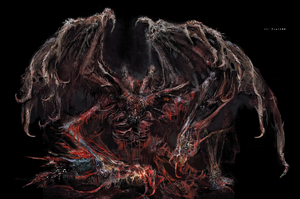 Concept art of the Demon Prince. 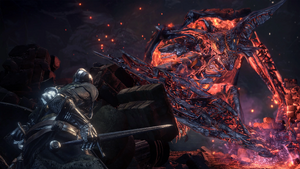 The Demon Prince battling the Ashen One. 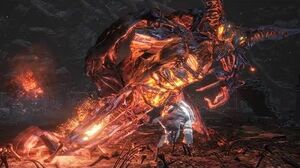 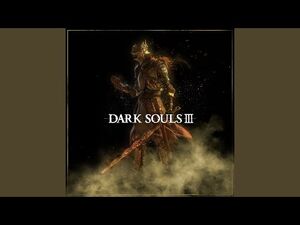