The Demon Queen is an evil demon who manipulated Achille and is the primary antagonist and final boss of Maximo: Ghosts to Glory.

This mysterious and devilish villainess who is from the underworld and claimed to the absolute ruler of all demons, is the one who drove Achille into madness and stole Maximo's kingdom from him by force. She even disguised herself as Queen Sophia, Maximo's beloved in order to tricked the valiant King as well as the villainous traitor Achille into believing it was her.

After Achille's defeat, She received the powers he gain from both sorcery and the souls of the dead, onto herself and grew stronger and unraveled her true form. She then attacks Maximo but he fought and won the fight against this demonic monarch who was slain in the end.

Grim who was the only who discovered the true threat behind the seige of the undead upon Maximo's kingdom and the world of the living. 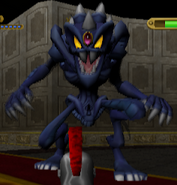 Add a photo to this gallery
Retrieved from "https://villains.fandom.com/wiki/Demon_Queen?oldid=3760910"
Community content is available under CC-BY-SA unless otherwise noted.