The Demon of Hatred, formerly known as "The Sculptor" (as well as Orangutan and Sekijo) is an antagonist and optional boss in the 2019 action-adventure game Sekiro: Shadows Die Twice. A former shinobi who has given up his quest for peace, his inner rage transforms him into a feral monster.

He was voiced by Jin Urayama in the Japanese version, and by Brian Cummings in the English version.

The Demon of Hatred was once a powerful shinobi known for training amongst the monkeys of Sunken Valley, giving him the nickname "Orangutan". He rescued Emma as a child after she nearly starved on a battlefield and sent her to be raised by Dogen to become a doctor. Becoming enraptured by murder and bloodlust in his line of work, the Orangutan was infected by Shura, a twist in personality that turns one into a beast, only able to kill for the joy it brings. To save him from being consumed by Shura, Lord Isshin of the Ashina clan sliced off his left arm, losing the axe he used to fight with as well.

Missing his arm, he was now dubbed "Sekijo", one-armed Orangutan. The previously mentioned Dogen constructed a prosthetic for him, and he continued to train and kill with it, working with Dogen to advance its engineering. However, he realized he could not go on like this, as the Flames of Hatred began to manifest in place of Shura's shadow, so he retired to the outskirts of Ashina in a remote temple. At this point he became dubbed the Sculptor, abandoning his shinobi name as he carves Buddha idols to combat the flames raging inside him. However, he cannot carve serene Buddha, only those with faces of wrath.

After Sekiro/Wolf is left for dead by Genichiro Ashina following his failed attempt to protect the Divine Heir Kuro, the Sculptor brings Sekiro to the Dilapidated Temple and gives him the Shinobi Prosthetic device to replace his missing arm, as the Sculptor has no more use for it. Throughout the game, the Sculptor serves as a blacksmith that can grant Prosthetic Tools to Wolf's arm as long as he brings special items. Later on in the game, Wolf discovers that the Sculptor suffers from Dragonrot, but states it cannot kill him. Even when Emma comes to nurse the Sculptor back to health, he continues working despite her recommendations.

After Wolf defeats the Divine Dragon, the Sculptor is gone from the Dilapidated Temple, leaving only his tools behind. Fujioka the Info Broker tells Wolf that the Sculptor stumbled off while muttering about "flames". Wolf continues up the trail until coming across the Ashina Outskirts, where everything is destroyed or on fire, with bodies of Ashina soldiers and horses scattered. In the field where Wolf defeated Gyoubu Masataka Oniwa is the source of the carnage, the Demon of Hatred.

It is wise to only challenge the demon until all necessary upgrades and items are collected, as the Demon of Hatred is an extremely powerful foe with three deathblows required to take him down and agile attacks and combos. Among his attacks is a range of fireballs from his fiery arm, a charge that sends fire across the area, and a slam that causes an explosion where he lands. As an apparition-type enemy, the demon is vulnerable to Divine Confetti, and Malcontent can be used to stun him up to three times before losing effect. It is also recommended to bring items that reduce and cure the burn status, as a majority of the demon's attacks inflict it. As each deathblow is dealt, the demon uses more fire attacks to attack Wolf.

Once the third and final deathblow is dealt, the Demon of Hatred regains his sanity and beckons Wolf to kill him. Striking another deathblow finishes off the demon, with the Sculptor thanking Wolf for ending his misery. Once the demon finally goes down, it drops the Memory: Hatred Demon, which increases Wolf's attack power when consumed, and two of the six Lapis Lazuli in the game that upgrades Prosthetic Tools to their ultimate form. In the Immortal Severance ending, after removing the Dragon Heritage by killing Kuro, Sekiro ends his role as a shinobi and replaces the Sculptor as the monk of the Dilapidated Temple. 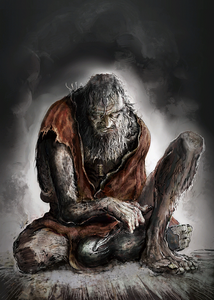 Concept art of the Sculptor. 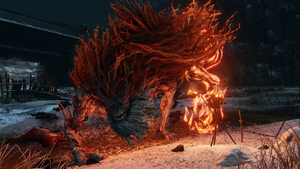 The Demon of Hatred. 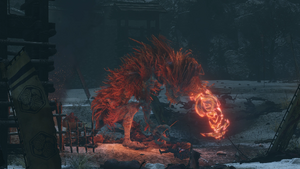 The Demon of Hatred finishing off the remaining Interior Ministry soldiers. 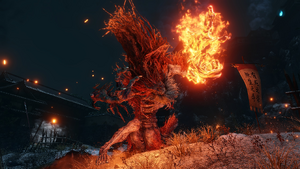 The Demon of Hatred attacking with fire.
Add a photo to this gallery 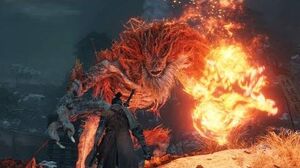 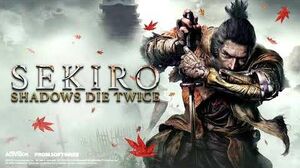 Retrieved from "https://villains.fandom.com/wiki/Demon_of_Hatred?oldid=4060900"
Community content is available under CC-BY-SA unless otherwise noted.