Summoning of Nagato, Obito, and Madara

Be of service to whoever summons it

Serve whoever summons it

Demon
The Demonic Statue of the Outer Path (外道魔像, Gedō Mazō) is a heretical idol and the major antagonist in the Naruto series. While it first appeared to be a personal summon of Nagato, the Demonic Statue of the Outer Path is actually the hollowed body of Ten-Tailed Beast and answers to those who possess the Rinnegan. It was also revealed to be the physical remains of Kaguya Ōtsutsuki.

The Statue is the container for the Tailed Beasts by the Akatsuki. To collect the Tailed Beasts, the Akatsuki members must telepathically appear before the statue with either the captured beast or it's human host (they are always unconscious, since the Akatsuki takes them by force). The sealing ritual requires at least nine members focusing their chakra on extracting the beast over a period of three days. When the ritual is complete, the original host dies and one of the statue's nine blank eyes gains a new pupil.

During the Third World War, Nagato used the Demonic Statue to devour an army of Leaf Ninja and renegade Rain Ninja. His reason for doing so was to avenge the death of his friend, Yahiko. This is came at a cost, however, as the Statue instinctively tries to claim the chakra of whoever holds the Rinnegan. This led to Nagato getting stabbed in the back with black rods that siphoned off most of his physical energy, leaving him in a near corpse-like state.

When the Fourth World War starts, Obito uses it for several purposes:

In his last dying days, Madara was shown with three vines protruding from his back that were connected to the flower stem on which the Statue sits. He claims that this helps keep him alive, which contradicts its usage by Nagato, who was nearly killed by using it. Presumably, Madara's merging with the flower is what kept him safe from the statue's chakra-draining properties, as the flower was clearly feeding off the statue.

After coming back to life, Madara forcibly extracted the Statue from Obito and used it to ensnare the Tailed Beasts.

Only those who possess both Uchiha and Senju DNA, or the Rinnegan, are capable of summoning and controlling the Demonic Statue. When summoned, the statue bursts from the ground, emerging either partially or entirely, depending on the situation. When Nagato summoned the Statue, the black rods emerging from its stomach that Madara stated to be created from his will (actually Kaguya's), pierced his back. The chakra rods sucked Nagato's life force and would have killed him if he hadn't broken away.

The Statue is capable of emitting a number of dragon-like apparitions from its mouth. When the dragons came into contact with ordinary humans, the humans' souls were ripped from their bodies, killing them. The members of Akatsuki utilized a sealing technique in which nine of these dragons would surround a jinchūriki or tailed beast until the tailed beast's chakra was gathered into the Statue's mouth and stored inside for future use. Nagato wanted to use these beasts to create a weapon that could destroy an entire country. Tobi however, intends to reassemble them into the Ten-Tails. In combination with the chakra chains of the Outer Path, the stored tailed beast chakra can be directed and stored back into the previous jinchūriki, and can be quickly withdrawn back into the statue should Tobi desire. When the Ten-Tailed Beast transforms into its God-Tree form, its roots resemble the same dragons that consumed anything in their path.

As evident from his enormous size, the Statue possesses great strength, enough to clash with the likes of Chōza and Chōji Akimichi in their colossal forms. It was also shown to be durable enough to take one of Chōji's Butterfly Bullet Bombing punches without even being pushed back, and stop Kitsuchi's Earth Release: Sandwich Technique, just by outstretching its arms. In the anime, it also displayed a high level of agility despite its massive size, as it could leap tremendous distances. It is also capable of creating shock waves capable of devastating an entire battlefield, and from the protrusions on its back, launching energy blasts.

While without a mind, the Statue is driven purely by instinct. It craves the life force of all living things. When it rests on its subterranean flower, it is capable of sharing its energy through the stem and roots, though this may not have been intentional. Black Zetsu later reveals that all the White Zetsu were originally humans that had been consumed by the God-Tree. They were then transformed into plant-people when the Statue released them. 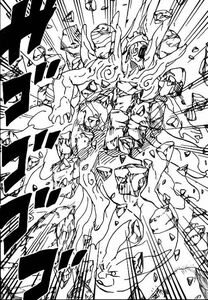 Retrieved from "https://villains.fandom.com/wiki/Demonic_Statue_of_the_Outer_Path?oldid=3893395"
Community content is available under CC-BY-SA unless otherwise noted.